Nick’s Note: For months, a clandestine group of developers has been working on a new digital currency for Facebook. According to media reports, the company siloes off its secretive team in an office requiring completely different key-card access so other employees can’t even enter it.

Obviously, the country’s largest social media platform launching a digital coin is big news for the entire space. So I reached out to world-renowned cryptocurrency expert Teeka Tiwari to see what it all means.

Teeka was in between conferences in Hong Kong and Singapore—looking for new profitable opportunities—when I reached out to him. But he took the time to talk about Facebook Coin and answer a few other questions…

Nick: Thanks for joining us today, T. We have a lot to get to.

But before we talk about Facebook’s new coin, we’re still getting a lot of questions from readers about the recent hack of your crypto accounts. Can you take a few of them?

Teeka: Sure… And I want to thank everyone for their well wishes and kind support. It’s been very helpful. I’ve cleaned up a lot of the hack’s mess so far, which is great.

Nick: Glad to hear that.

Teeka: Well, most banks and crypto exchanges will want you to provide a phone number for you to authenticate your account. It’s called two-factor authentication, or 2FA.

And if you want your 2FA to be really secure, you need a second phone number that’s not attached to you in any way, shape, or form.

That means your name won’t be linked to that number. Essentially, it’s an anonymous number. So you can link your recovery email to this secondary number for authenticating your accounts.

This way, if you lose your primary phone—or if it gets hacked the way mine did—no one can reset your passwords using your primary number.

It’s cumbersome, ponderous, and… to be frank… just a big, old pain in the rear. But unfortunately—and certainly for somebody in my position—it’s just something I have to do for my own security.

I can’t tell you what a hassle it’s been having to change everything: my phone number, plus all my accounts, emails, and passwords… I even had to put a freeze on all my credit reports.

So it’s a lot of work and very inconvenient. But it’s really the best solution I’ve found. If I’m going to use 2FA, it has to be on a completely separate phone with a number that nobody knows belongs to me.

Teeka: That’s a good question. The majority of the time, we recommend you store your crypto in a secure wallet in which you control your private keys. That’s the safest way to protect your crypto funds.

But sometimes, you’ll need to keep your crypto on an exchange. For instance, there may be a swap or a fork requiring you to convert or receive new tokens. In those cases, you may need to let the exchange handle the conversions for you.

And on some rare occasions, a token may not have a wallet available yet. So in that case, you’d have to keep the coin on an exchange until a wallet is available. But that doesn’t happen very often.

However, if those situations do arise, you need to make sure you have 2FA for your account. And again, make sure the phone number and email address for that account are not linked to your primary phone.

And please don’t store your passwords on the internet. If somebody gets ahold of your email accounts, they can then access your crypto accounts.

The first thing the person who hacked my phone did was break into my Evernote and other cloud accounts to hunt for stored passwords.

Nick: Thanks for answering those readers’ questions, T. I’m sure they’ll appreciate it.

What does this mean for the crypto space?

Teeka: Facebook isn’t the only big institution launching its own coin. JPMorgan Chase is coming out with its “JPM Coin,” too.

But let me be clear: These coins aren’t cryptocurrencies. They’re derivatives—ways of moving money across networks. So they’re really not much different from PayPal, Venmo, or Cash App.

But what’s very interesting is that, for much of last year, these two big companies claimed to completely hate crypto.

For a while, Facebook banned crypto ads. But it reversed the ban just before it started working on its own coin. And JPMorgan CEO Jamie Dimon infamously called bitcoin a “fraud.” Yet, his company is now using cryptographic tokens to move money around.

The fact that this technology is getting co-opted by some of the biggest players on Wall Street and in Silicon Valley is very positive for crypto.

In fact, I’ve been saying that 2019 would be the year of Wall Street greed. And my thesis is playing out with these big institutions entering the space…

As more people get exposed to crypto-like assets and functionality, they’ll understand how much more powerful bitcoin and ether are compared to JPM Coin and Facebook Coin.

Nick: How will they do that?

Teeka: The best parallel I can draw is with the internet.

During the internet’s early days, you saw major corporations create their own internal internets, called “intranets.” These were private networks used to disseminate information to employees about projects and customers, for instance.

Well, here we are 20 years later… and nobody uses intranets anymore. They were a complete flop. And the same may happen with these private coins.

At the end of the day, I believe—and my team also believes—that in terms of remittances and distributed applications, public blockchains like bitcoin and Ethereum will be the leaders in the crypto space. That’s where most of the development will take place.

But again, the big players will expose people to crypto…

Facebook has 2.3 billion users it’ll need to educate about crypto coins… how to use them… and how to store them in wallets. And that’ll essentially grow the entire market for—and enable widespread adoption of—true crypto assets like bitcoin and ether.

Nick: And before I let you go, I know you’ve been attending conferences in Hong Kong and Singapore. Have there been any big developments there?

Teeka: Yes… and the key takeaway is that Asia is booming.

The stores in Hong Kong and Singapore are bursting with consumers. I haven’t seen conspicuous consumption like this since New York City in the 1980s.

The other key insight I had is that Southeast Asia—a region of over 600 million consumers—is growing at a breakneck pace.

If I were a young tech entrepreneur, I’d target Southeast Asia. There’s a full-scale tech war going on in the region. The big players are going all-out to capture as much of the market share as they can.

It’s definitely a place we want to get some exposure to. So I’m looking forward to unearthing some ideas we can invest in.

Nick: Can’t wait to hear about them. Thanks again, T.

Nick’s Note: If you have any questions for Teeka, send them to us right here. Just remember, we can’t give individualized advice.

On Wednesday at 8 p.m. ET, legendary speculator and longtime PBRG friend Doug Casey will reveal five controversial predictions for 2019 and beyond…

These forecasts are too outrageous to reveal here—and you can only see Doug discuss them during his live event.

But you can click the trailer below to watch a preview of—and reserve your ticket for—Totally Incorrect: LIVE… 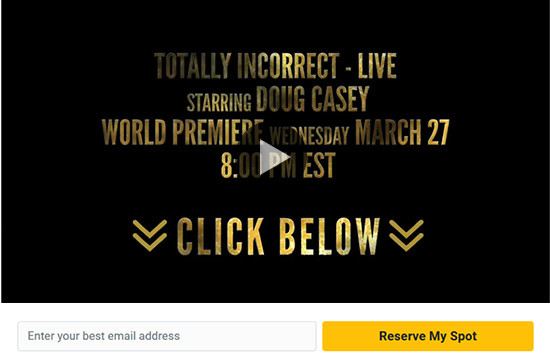