During a speech last Tuesday at the conservative Heritage Foundation, Trump pitched the plan as “the best Christmas present of all” for the American people.

But he’s also worked in the financial markets for over 25 years… including serving as a Wall Street executive and hedge fund manager.

While the mainstream media predictably focuses on political bickering over the Trump tax plan, Teeka and his team have scoured it for hidden opportunities. And they’ve identified nine important words buried in the bill that every reader can profit from…

Nick: T, President Trump is out there pushing his new tax agenda. With all the gridlock in D.C., do you think he’ll be able to pass it?

Teeka: It looks like it won’t be the broad reform that was promised. But we’ll get something.

It’s too good not to pass. I think it was Warren Buffett who said, “Any politician that can’t pass a tax cut is probably in the wrong line of business.”

The Trump administration doesn’t want this to be a problem. They’ll find some way to pass it.

So yes, I do think we’ll get some kind of tax reform.

Nick: You told me there are nine words buried in this legislation that could make this the biggest tax cut ever. Could you tell readers what they are?

Teeka: Sure. “A one-time tax on trillions of dollars held overseas.”

Nick: What does that mean?

Teeka: That 9-word sentence will temporarily change how U.S. corporations are taxed.

Many U.S. multinational companies hold their overseas profits in tax-haven countries like Bermuda, the Cayman Islands, and the Bahamas. This allows them to hold on to their money for longer.

When they bring those profits back home, it’s called “repatriation.”

Today, the tax rate on overseas profits is 35%. That’s why many companies haven’t “repatriated” them yet.

President Trump’s plan would allow these firms to bring back cash now and pay a lower tax rate on these profits.

We don’t know what this one-time tax rate will be. But it will be much lower than 35%.

When this law is passed, we could see $2.6 trillion in overseas profits come back home.

Nick: What makes you think they will bring all that money back?

Teeka: It’s all going to come back…

The last time the U.S. had a cash “repatriation holiday” like this was in 2004. That’s when George W. Bush signed the Homeland Investment Act.

The act gave a one-time deduction of 85% from taxable incomes received from overseas.

Over 90% of foreign cash was brought back within our borders.

And if it goes through, shareholders will be the No. 1 beneficiary.

Nick: How will shareholders benefit from this?

Teeka: The National Bureau of Economic Research did a study in June 2009 on the 2004 act.

For every $1 repatriated, 94 cents was returned to shareholders through dividends and buybacks.

Nick: How can readers find companies that will benefit most from this tax plan?

Teeka: In The Palm Beach Letter, we look for safe, conservative investments. And that’s in addition to finding companies that will benefit from bringing cash back.

First, we look for companies that hold a large stash of cash overseas. This is obvious. These are the only companies that will be helped by this law.

Second, we look for companies that pay out significant dividends and buy back shares.

A large part of our investment thesis is that you will get some of this money back. We don’t care if it’s in the form of dividends or buybacks.

Nick: Trump has had difficulty passing legislation so far. We all saw what happened with his Obamacare “repeal and replace” bills. What if tax reform doesn’t pass?

Teeka: Even if tax reform doesn’t happen, you still want to own these types of names. I always say, “never put a name in the portfolio if there’s only one catalyst.”

Like I said, these are high-quality companies with strong, stable dividends. These are great investments even if tax reform doesn’t pass.

Nick: Is there a simple way for readers to play this?

Teeka: Apple was one of the biggest benefiters of the last tax repatriation holiday.

Today, Apple has $230 billion in foreign cash. Based on history, we expect Apple to repatriate 90% of that cash, or $207 billion.

Nick: Thanks for taking the time to talk to us… and to reassure me that these stocks will be good for our portfolio even if tax reform doesn’t pass. Have a good one.

Nick’s Note: Right now, Teeka has seven stocks in the PBL portfolio (including Apple) that will get a boost from Trump’s tax plan. Of the seven, a couple are already up nearly 10%.

These are high-quality companies that pay a large, stable dividend. That makes them attractive for yield-hungry investors.

But if President Trump’s tax reform passes, these stocks will really take off.

Meanwhile, Teeka tells me there’s another sector poised to take off by December 31. It involves the launch of America’s first new “stock exchange” since 1971.

The U.S. jobless rate is at its lowest point in the last 44 years…

The number of jobless claims is a strong indication of how the labor market is doing. As you can see in the chart below, that number is near historical lows. 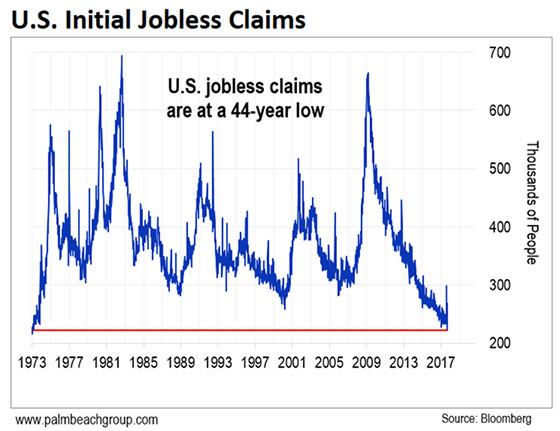 These latest numbers are just another indicator that the U.S. is doing well.

From Jeb B.: I hear that your small-cap Palm Beach Confidential service now has 180,000 subscribers? Holy cow! I remember you saying this service was meant to be smaller so that we didn’t move the needle too much on these smaller picks. Seems like that goal is now lost. Just something to think about.

Nick’s Reply: Hi Jeb. It looks like someone has been bragging on our behalf… and getting creative with the facts.

These things can jump big if too many people try to get in at once. That’s why it’s is much more expensive… and much more exclusive. The Confidential has only a miniscule fraction of readers as the Daily. And that’s by design.

From Eddie F.: The B1-B bombers are not nuclear bombers (From October 18 Daily, Trump’s $700 Billion Spending Spree Will Boost These Three Companies). When first activated they were, but they went conventional many, many years ago.

Nick’s Reply: Thanks for the catch, Eddie. You’re right. The B1-B bomber was converted from a nuclear bomber to a conventional bomber.

We want to hear from you. If you have a question or comment, click here to send it to us. We read every email that comes in, and we’ll publish comments, questions, and answers that we think other readers will find useful.