Nick’s Note: Tonight at 8 p.m. ET, PBRG guru and world-renowned cryptocurrency expert Teeka Tiwari will hold our biggest event of the year: The Great Cryptocurrency Conspiracy of 2018. This event is so big, Teeka has joined with media personality Glenn Beck to broadcast it live from Glenn’s Dallas studios.

More than 70,000 people have already signed up to attend. With bitcoin rallying 16.5% since July 1, I wanted to get a preview on what he’ll be talking about tonight. Here’s what he told the Daily…

Nick: T, there’s a lot of buzz around the office about your live broadcast tonight. We’ve even designed special T-shirts to wear for the event. Tens of thousands of people have already signed up to watch. What will you and Glenn be talking about?

Teeka: We’ll talk about a major shift I’m seeing in the cryptocurrency space.

You see, right now, very large institutions are starting to run toward the cryptocurrency market… while individual investors are running away.

Make no mistake, Nick… We’re in the middle of a massive handover of wealth from individuals to institutions.

I’ve seen this institutional blueprint for stealing wealth play out again and again.

I saw this happen after the housing crisis in 2010–2012, when institutions started buying up foreclosures by the thousands… but individual investors couldn’t get a mortgage.

I saw it in 2003 after the dot-com crash, when institutions started buying up internet and technology stocks on the cheap… but on CNBC, they kept telling the public it was too early to buy.

I saw it during 1994–1995, when institutions scoffed outwardly about how “dumb” money was buying internet stocks… while they were loading up as individuals were selling.

I don’t want our readers to fall victim to this strategy. The key is to focus on what institutions are doing… not on what they’re saying.

Nick: That’s good advice, T. My research also shows that institutions are starting to flood into the crypto space (see here and here, for example).

But let’s get to the elephant in the room. Everyone knows that the crypto market has seen a massive pullback this year, although bitcoin has rallied 16.5% since the start of the month… Why do you think the market is going higher?

Teeka: I’ll reveal the major catalyst during tonight’s broadcast. It’s a big announcement that everyone interested in this exciting new asset class should hear… So you won’t want to miss the broadcast.

But there are three proximate catalysts I can share now…

First, I think the turnaround in cryptos is coming because—as I said earlier—large investors are getting in.

One of these investors is perhaps the most prestigious tech venture capital firm in the world—Andreessen Horowitz.

Andreessen Horowitz is one of the top Silicon Valley venture capital funds. It has $2.7 billion in assets under management.

This is no Mickey Mouse outfit. These guys are smart investors. They were early investors in Twitter, Facebook, Groupon, and Airbnb.

And last month, the firm raised $300 million for a crypto hedge fund.

It has been active in the cryptocurrency space with early investments in Coinbase and Ripple.

Andreessen Horowitz isn’t in the business of trading either. It’s a long-term investor. The firm has been investing in crypto assets for five years… and it hasn’t sold a single investment yet.

It usually holds investments for 10 years. So this signals that it believes cryptocurrencies are going to be around in a decade.

Nick: Why is this such a big deal?

Teeka: Here’s the thing, Nick… They plan to invest directly in cryptocurrencies.

But what really got me excited was they were able to raise $300 million in the middle of a bear market. When a market is down a lot and smart money comes into the market in size… it’s very bullish.

This fund is one of the many large pools of money now going into the same crypto market that we’re in. And there will be copycat investors that follow, which will push prices up.

Nick: That is big news… and it’s something we’ll be following closely. What’s the second catalyst?

Teeka: The next catalyst may not sound like much to some people… but it’s huge—the fact Facebook will allow crypto advertising again.

In January, Facebook was worried it had too many crypto ads on its network… It was concerned that some of these ads might be fraudulent.

So to be safe, Facebook banned all crypto ads.

Facebook, Google, and Twitter are the main ways people search the internet for information. A lot fewer people were getting exposed to cryptos because of these bans.

But last month, Facebook became the first big internet player to reverse a self-imposed crypto ad ban. It’s using a vetting process to make sure fraudulent ads don’t get through.

Now, with that restriction lifted, more people can advertise cryptos. This will bring renewed attention—and money—to the industry. Once again, prices should rise.

This is going to bring much needed regulatory clarity in these two important crypto markets—especially when it comes to South Korea. It’s an important market and has been rocked recently by hacks and regulatory overreach.

In the next few weeks, we expect both countries will have fully integrated their new rules. From what I’ve seen, they strike the right balance of protecting consumers while still supporting innovation.

The Asian markets are gaining regulatory clarity before the U.S. As such, I expect they will be the ones to lead the crypto market much higher.

Nick: Those three reasons alone are enough to convince me. I can’t wait to hear the big announcement you have tonight. Thanks.

Nick’s Note: As Teeka said in the interview, there are several reasons why cryptocurrencies are going higher. But there’s a new announcement that has come out—just like last year—that will radically push up the price of bitcoin.

This announcement is completely being ignored by the market. But it could take bitcoin up 10x from where it is today.

During his free training event with Glenn Beck tonight at 8 p.m. ET, Teeka will reveal the details of this announcement in full.

And to show you indisputable proof that he’s right, he’s also going to give you the names of three cryptocurrencies set to benefit from this trend—for FREE, live during the broadcast—so you can track their performance and witness their growth with your own eyes.

You’ll also learn how to claim your share of our $2 million bitcoin giveaway.

Click here now to register, and make sure you don’t miss a thing. 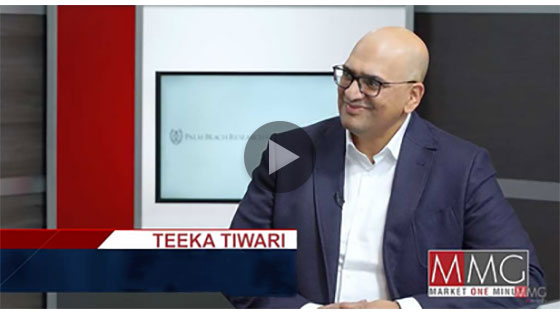