If you follow the mainstream press, I can’t blame you for thinking we’re steamrolling toward a financial crisis…

In just the past two days, we’ve seen headlines like these…

The S&P 500 and Nasdaq are down 18.6% and 28.9%, respectively, from their all-time highs… Earlier this week, U.S. stocks posted their biggest one-day drop in two years… And inflation is the highest it’s been in 40 years.

But I want to be clear with you on one thing: Despite the volatility we’re seeing, we’re not in a “financial” crisis. Instead, we’re in what I call a “valuation” crisis.

Understanding the difference is key to knowing what to do next, so you come out of this volatility richer, not poorer.

Volatility in financial assets is inescapable… Coming out richer from a volatile period is all about the choices you make right now.

I wager most investors believe all market drops are a form of a “financial” crisis. And I can see why…

When your portfolio takes losses, it doesn’t matter what’s driving it. It feels like the world as you know it is coming to an end.

But based on my over 30-years of experience in the markets, I’ve learned it’s important to distinguish between a genuine financial crisis and a valuation crisis… because the nature of the crisis determines how you should respond.

And how you respond determines whether you make or lose money once the turbulent times pass.

A true financial crisis happens when the entire financial system becomes insolvent, near insolvent, or there is widespread fear of insolvency.

We saw that in 2008 when Lehman Brothers filed for bankruptcy. The collateral backing its loans ended up being worth just a fraction of what they thought.

That set off a chain reaction of asset sales that imperiled the entire global financial system.

This financial crisis led to a prolonged bear market that saw U.S. stocks crash 50%… the biggest crash since the Great Depression.

When facing a financial crisis, the prudent thing is to either exit stocks or have protective hedges in place.

Why This Sell-Off Is Good News

But like I said, we’re not in a financial crisis. We are in a “valuation” crisis… This is good news.

What do I mean by that?

It all has to do with the “discounted cash flow” (DCF) model. (I’ve explained this model before right here.)

The DCF estimates the value of an investment based on its expected future cash flows.

It uses the risk-free rate of return (as measured by the 10-year U.S. Treasury rate) to determine how much to pay for a future expected stream of cash flows from an investment.

As the yield (the interest rate you receive) on the 10-year Treasury (risk-free rate) goes higher… the DCF model recalculates the present value of future cash flows lower. That means analysts must reprice equities lower.

This is a highly simplified explanation of the DCF model. What’s important to understand is that Wall Street analysts use it to value stocks.

Right now, they’re recalibrating for a higher risk-free rate of return because they expect the yield on the 10-year Treasury to rise. And that’s pushing stock valuations lower.

That’s why I call this a “valuation” crisis.

Look, I understand. Even though it’s not a financial crisis, a valuation crisis is still painful.

The last time we saw this was in December 2018. Like now, the Fed was threatening a series of rate hikes and jawboning the market lower. 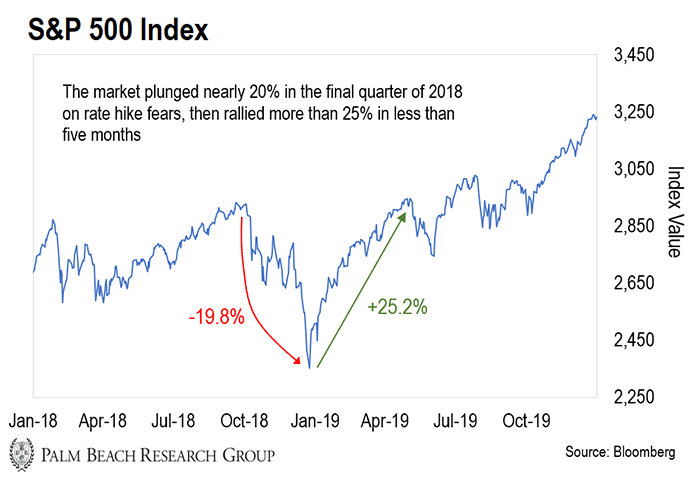 As you can see, stocks rebounded in less than five months… And went on to rally to new highs.

So despite the pain we’ve felt in our portfolios the last few months, this sell-off will be temporary.

However, we’re not out of the woods yet.

As painful as that might be to go through, I expect the market will close near flat for the year.

Watch the Fed and Look for Bargains

Right now, the Fed is gunning hard to fight off inflation. And its most powerful weapon is rate hikes.

There’s no way the U.S. can make its debt payments at the 15.8% interest rate… So there’s a ceiling on how high the Fed can raise rates before it blows a hole in the Treasury.

So I believe the Fed will be more cautious. It will get to a point where it feels like it’s done enough to stall inflation… Then it’ll signal another policy shift to the market.

Once that happens, we’ll see the pendulum swing in the other direction. And the secular bull market I predicted back in 2014 will resume.

Will that happen overnight?

We’re in a short-term cyclical bear market within a long-term secular bull market.

So as I wrote above… I expect the market to drop some more and finish flat for the year… then take off again in 2023, representing fantastic long-term values.

Until then, there’s still a lot of fear out there… and it’s our job to take advantage of it.

A valuation crisis is one of the best times to pick up great companies at great bargains. Blue-chips like Facebook, Walmart, and Amazon are down as much as 50% from their all-time highs.

Unless you think these companies are going bankrupt – and I don’t – they’ll rebound once this temporary sell-off retreats.

When that happens, we’ll look back and marvel that the valuations of these world-class companies got so cheap. And those who take advantage now will reap the financial windfall when the bull market resumes.