Toymakers Hasbro (HAS) and Mattel (MAT) are getting crushed.

Just take a look at the chart below: 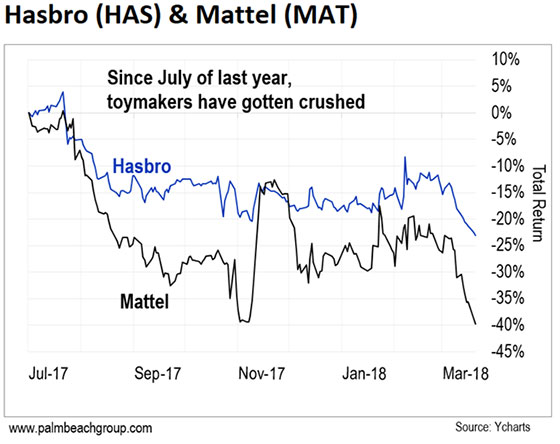 Recently, shares have really taken a dive. Hasbro is down 11% this month alone. Mattel is down 19%. The reason is simple: Toys “R” Us recently announced that it’s shutting down all its U.S. stores.

But as I’ll show you today, these fears are overblown. In fact, this sell-off is giving us a great opportunity to turn a big profit.

We’ve Been Here Before

Longtime readers know that we thrive in these types of situations.

Last September, we told you that Toys “R” Us had entered bankruptcy. The news was dragging down the entire retail sector. But we also told you that the “retail apocalypse” wouldn’t destroy all retailers.

As we said, over 90% of all purchases are still done in brick-and-mortar stores. And sales in these stores were growing.

The market overreaction created an opportunity to buy other retailers at a steep discount. We suggeted you buy the SPDR S&P Retail ETF (XRT).

We were spot-on. Over the next three months, XRT climbed 17%. Take a look: 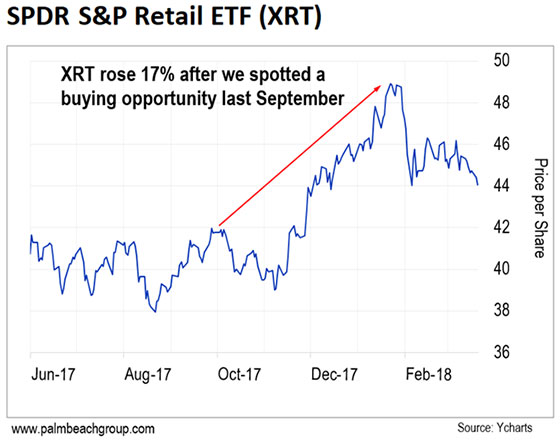 Think about it. Are you going to stop buying your kids, grandkids, nieces, or nephews toys for their birthday because Toys “R” Us closed?

No. You’re just going to go somewhere else. You’re going to pick up the toys at Walmart or Target instead. You may even skip the store altogether and buy straight from Amazon.

In other words, the Toys “R” Us news doesn’t change anything… But it is creating a huge buying opportunity today.

I think now is a great time to pick up shares of Hasbro and Mattel while they’re cheap.

As I’ll show you below, these two companies are very different. Hasbro is a safe, profitable dividend raiser. Mattel is more of a speculation, as it’s going through a corporate restructuring. Both could make you a lot of money in the months ahead.

Like I said above, Hasbro is the safer of the two companies. It’s growing revenues, sales, profits, and cash from operations.

Management is using some of that cash to reward investors with a solid dividend payment. Right now, the dividend yield is 2.8%. And over the past 10 years, Hasbro has increased its dividend payment an average of 14% per year. That makes it a sound investment.

And Hasbro isn’t just a toy company anymore. It also has a digital gaming segment which grew over 10% last year. This segment includes popular mobile games like Monopoly, Star Wars, and Transformers.

Game maker stocks trade at much higher multiples than toymakers. So this is just another reason to be bullish on Hasbro and its future.

If word gets out that Hasbro is a game maker, its stock could easily double from here. But I’m guessing that will take a few years to play out.

While we wait, we can collect that 2.8% dividend payment. Not a bad deal.

Mattel, which makes Hot Wheels and Barbie, is in the midst of the turnaround. Some analysts are wondering if it might be thwarted by the Toys “R” Us news.

Like I said, I don’t think so… But it makes the turnaround harder.

Last year, Mattel lost over $500 million as it restructured its business, laid off a bunch of workers, and tried to revitalize some product lines (like American Girl).

Obviously, Mattel can’t have many more years like that and survive… I calculate it would run out of cash in about three years if it did. But that’s plenty of time to execute a turnaround.

Analysts predict the company will have a better year with profits flat. But right now, the company isn’t losing money. And with strong core brands and new partnerships like the Nickelodeon deal earlier this year, Mattel has lots of toys it can make and sell.

As it stems the bleeding, hopefully Mattel can get into some new growth areas like Hasbro got into digital games.

Mattel has a tough road ahead… But if it can turn around the ship, and even post a small profit, I think it’s another easy double from here.

As always, remember to do your research before making any investments. Use proper position sizing. And always have a plan in place before you buy.

P.S. Longtime readers know that Amazon is the cause of the apocalypse. And now it’s looking to capitalize on the Toys “R” Us news. It just came out and said it wants to open its own stores in buildings that Toys “R” Us has vacated. Amazon’s plan of domination continues to play out… And it’s now the second-biggest company in the world.

Amazon is up 67% since I wrote about it in May… And there’s still time to buy as it continues its march up to $1 trillion.

We’re looking for someone who eats, sleeps, and breathes micro-cap stocks…

If that sounds like you, read on here… You may have what it takes to join our team as a high-profile investment expert.

He answered readers’ burning questions about what’s next for this new asset class… what regulations mean for the space… and the best ways to take advantage of the recent correction.

If you missed it, don’t worry. Teeka’s agreed to keep a replay of the Q&A online for a short time. So be sure to watch it right here before it goes offline.