Nick’s Note: Volatility has been the buzzword when it comes to cryptocurrencies. Whether you’ve been with us for years or have just come aboard, you know by now that we can see massive swings in this new asset class.

Below, world-renowned cryptocurrency expert and PBRG’s very own Teeka Tiwari explains why you should look past the volatility and recognize the big picture…

If you’re new to cryptocurrencies, the recent volatility can be unnerving.

Since its January highs, the cryptocurrency market has fallen as much as 66%. And bitcoin fell 70% from peak to trough.

Since rallying off the lows, we’ve seen yet another downturn.

Naturally, new investors in this space are scared.

But it’s important to understand that volatility and the cryptocurrency market go hand-in-hand.

We can use bitcoin to demonstrate.

Let that sink in for a moment. That’s just over one year.

For reference, the U.S. stock market hasn’t had a crash of 30% or more in nearly a decade.

Stepping back and looking at the entire history of bitcoin, we can see that large corrections—like the one we’re seeing now—are the norm.

So while the current 70% drop is scary, it’s normal when viewed in context. Here at Palm Beach Research Group, we look past the daily price movements to the big picture.

And what we see is another great year shaping up for cryptocurrencies.
One of the big themes emerging is what we call the “New Wall Street Narrative.”

We wrote about it in the February 26 Daily.

In that issue, we explained that Wall Street has a history of using “narratives” to drive investment decisions.

The internet “new era” and the “housing plateau of prosperity” are two good examples of these narratives.

The new narrative emerging from Wall Street is that adding cryptocurrencies to institutional portfolios will help tame volatility.

And that is going to take the cryptocurrency market to new heights in 2018.

We’re already starting to see it play out.

It was quickly labeled the “Bitcoin Bible.”

And it confirmed our thesis when it concluded:

If past returns, volatilities, and correlations persist, cryptocurrencies could potentially have a role in diversifying one’s global bond and equity portfolio.

A month later, investment management behemoth BlackRock—which has $5.7 trillion in assets under management—put out commentary on cryptocurrencies which stated:

Our bottom line: We see cryptocurrencies potentially becoming more widely used in the future as the markets mature.

Shortly after the BlackRock commentary, Wellington Management published its own report on cryptocurrencies. Wellington, which has over $1 trillion in assets under management, stated it was evaluating adding crypto assets to its client portfolios.

As you can see, the narrative is growing louder.

At the same time, one of the key pain points for institutions is close to being resolved.

That pain point is custody.

You see, institutions need a third party they can trust to store client funds securely. But there haven’t been any institutional custody providers in the crypto market.

While many are working on such a product, we think Coinbase will be the first to provide one.

In November 2017, the company announced Coinbase Custody—a digital currency custodian for institutions. And it’s getting closer to being released.

Coinbase just hired Eric Scro as the vice president of finance. He was the former head of finance at the New York Stock Exchange.

And one of his chief roles is to help serve institutional clients and promote new product offerings like Coinbase Custody.

Here’s what I concluded: We’re going to see 5–10% of global stock wealth diverted into the cryptocurrency market under the narrative of lowering risk.

Now is the time to use the weakness in cryptocurrencies to pick up bitcoin and add to your positions.

You see, we received thousands of questions during the broadcast. More than we could cover in a single evening.

So, I’ve decided to fly back from Puerto Rico and spend another evening with you. I want to cover the topics we couldn’t get to… and answer any new questions that have come to your mind.

Want to know more about the “Second Boom”? Crypto volatility? My investment strategy? Just ask… Anything you want to talk about is fair game.

As you know, I can’t give personalized advice, but I can answer any general questions you have. It’s completely free—all we ask is that you register in advance.

Please take a moment to do so here.

Have you ever wondered why Trump hasn’t been able to get more done as president… even with both houses of Congress controlled by his own party?

Who’s really setting the agenda… and what have they planned for us next?

A new book, The Oath to Save America, offers a shocking answer to these questions. We’re printing a limited number of free copies, and we’d like to rush one to you.

You can learn how to claim your free copy in just a few moments right here. 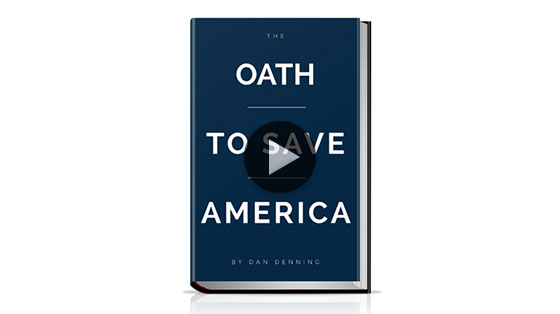