In May 2019, I sent out an alert to my subscribers. I said: “The appetite for cryptos is exploding.”

You see, I knew a rare phenomenon was fast-approaching. So far, in crypto’s short history, it’s only happened twice.

It’s called the “halving.” And each time, it’s ignited the price of bitcoin: 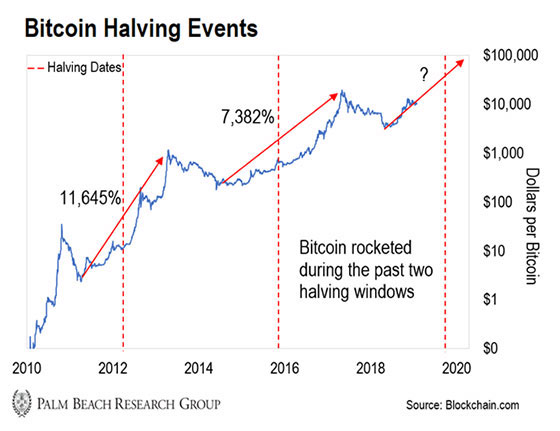 But right now, there’s a lot of negative sentiment in the crypto market—from regulatory uncertainty to complicated new tax rules. And it’s putting some short-term pressure on bitcoin prices.

This year—after exploding from its January trough of $3,395 to its June peak of almost $14,000—bitcoin is down around 40%. And now, people are worried this selling pressure will put a lid on the halving.

But today, I’ll share why that view is wrong—and more importantly, why you should prepare now for the next halving price explosion…

The halving event is when the bitcoin reward is cut in half. You see, there can never be more than 21 million bitcoins in existence. The issuance is strictly regulated by computer code.

Each halving reduces supply coming to the market. The first halving occurred in 2012, and the second in 2016. The third will occur in May 2020.

Now, we’re about to see two major forces come together to lift bitcoin prices: a declining supply from the halving… and overwhelming demand from institutions.

This level of institutional access to crypto assets is unprecedented. It’ll result in a surge of demand for bitcoin and many other cryptos.

I want you to think about it logically: Bitcoin’s incoming supply will be cut in half… and demand is about to explode. It’s simple supply-and-demand economics.

Still, I’ve received a ton of mail asking how I can be so sure the halving will boost prices—especially with so many negative headlines out there.

Well, all you have to do is look to the past…

We’ve Seen This Movie Before

I went back to look at some predictions from 2016, right before the second halving event. At the time, bitcoin was trading around $600.

Here’s what I found:

Now, if you were reading predictions like these in 2016, I wouldn’t be surprised if you sat out the halving event. But it would’ve been a mistake… You would’ve missed out on bitcoin’s incredible run from $600 to $20,000 just 16 months later.

To me, it’s a simple bet: decreasing supply and increasing demand.

I looked at the technology and the market, and I said, “The adoption rate is going to climb dramatically.”

And then it was easy, second-grade logic to figure out: “You know, bitcoin is pretty cheap at 600 bucks. We should probably buy some.”

Friends, we’re at the cusp of an explosion in demand that’ll far eclipse anything we’ve seen in bitcoin and other cryptos.

This halving protocol is as close to being “set in stone” as you can get in the digital world. And we know the exact date it’ll occur next.

Think about it this way…

If you knew half of the world’s incoming gold supply was going to disappear next May, what would you do?

You’d drop everything the moment you got that tip. You’d get your hands on as much gold as you could… because the value of the remaining half is going to the moon.

The bottom line is this: The halving is happening. We’ll see bitcoin prices explode higher—followed by even bigger percentage moves in altcoins.

And if somebody says something negative about the halving, they probably don’t understand economics. Just smile and say, “Okay, thanks for sharing,” and move along.