“Three companies are going to be in a lot of trouble if Amazon gets into the retail drug market.”

At the time, Amazon had telegraphed its move into the drug business… And I said it would soon set up shop as a pharmacy.

Lyons is a former director at Premera Blue Cross. So, he knows how to navigate the highly regulated U.S. pharmaceutical industry.

His first job will be to create a pharmacy benefits program for Amazon employees. Once Amazon irons out the kinks, it will likely roll out a nationwide program.

Pharmacies should be shaking in their boots…

I warned you to avoid Walgreens, CVS Health, and Express Scripts. And I hope you did.

If you had listened to me then, you would have saved a lot of money.

Since May 24, all three are down an average of 8%. Walgreens is the worst performer, down 16%. 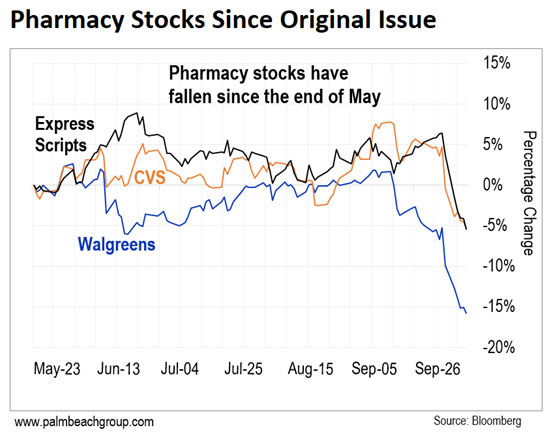 This performance is even worse when compared to the overall market… The S&P 500 rose 6% during the same span.

As you can also tell from the chart above, these stocks really sold off at the end of last month.

That’s because the rest of the investing world is starting to catch on to what I’ve been telling you.

The News That Sank Pharmacies

That’s what Leerink Partners’ analyst David Larsen told clients on October 5. He added, “It’s a matter of when, not if.”

Leerink is a premier investment bank and research firm. It specializes in only one field—the health industry. The firm doesn’t touch anything else.

When Leerink releases a report on the health industry, investors take notice.

The day after Larsen spoke, CNBC said we could soon expect an announcement from Amazon about entering the pharmacy market before Thanksgiving.

And their falls may not be done yet…

Pharmacies might look cheap, but they’re a value trap.

The profit margin of all three pharmacies is about 3%. That means that for every dollar they collect in revenue… only three cents makes it to the bottom line.

These are barely profitable businesses. That’s why they’re all trading at a discount to the market.

This might entice some value investors to start buying…

But this is different from the value I’ve been writing about in the retail sector. The selling isn’t over for pharmacies.

If Amazon enters this space, there will be disruption as it gains market share.

And by my rough, back-of-the-napkin calculations, if sales go down just 10%, these companies will no longer be profitable.

They will suddenly become expensive stocks.

There’s another difference between pharmacies and retailers.

Most retailers have a plan to compete with Amazon. But pharmacies are ignoring the threat. They sound like Blockbuster did when it dismissed Netflix as a competitor.

And we all know how that turned out…

Express Scripts CEO Timothy Wentworth said entering the pharmacy business “requires you to figure out how not to dispense drugs or to dispense the right drugs as much as it does to dispense them. So it’s a long pull to become a [pharmacy benefits manager].”

When asked about Amazon entering his space, CVS CEO Larry Merlo said, “there are many barriers to entry when you’re looking at pharmacy.”

But Amazon has a way around that.

It can just buy a mid-sized pharmacy benefits manager. Then it’s in the game.

This will force pharmacies to change their business model to survive. Otherwise, Amazon will eat them alive.

These changes will cost time and money, which will drag on profits. And if profits go down, so will stock prices.

Stay away from these companies. In fact, if you’re a trader, you may even consider shorting them.

As you can see in the chart below, the cryptocurrency just blew past its old high set at the start of September. 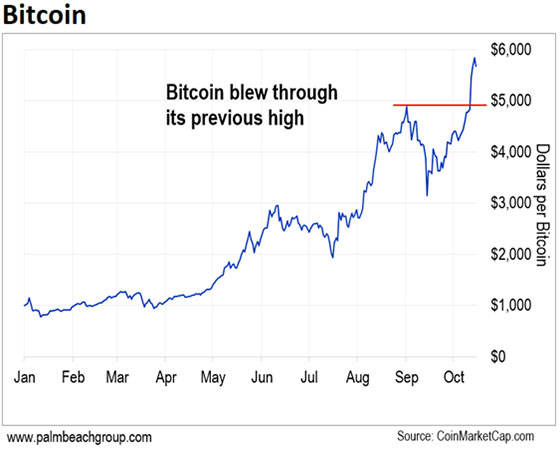 The rise comes despite all the “bad” news and naysayers coming out against bitcoin.

The cryptocurrency has shrugged off China’s ban on initial coin offerings and exchanges.

But none of this news is keeping bitcoin down. This is one powerful trend we want to ride higher.

Today, we have a special message from colleague and PBRG friend Chris Mayer, chief investment strategist for the Bonner Private Portfolio.

Some of the world’s best investors email me ideas. But until now, I haven’t been able to share them with you. Now for the first time, I’m preparing to share three of these ideas from my private network…

And I’m so convinced they’ll pay off for you, I’m putting $5 million on the line to prove it. Click here or the video below to learn more. 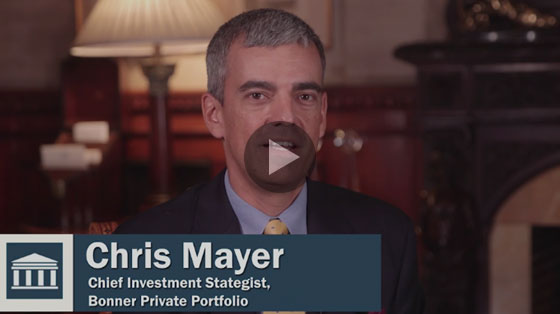