If you’ve been watching the crypto markets the past few days, it’s been rough going…

Since hitting their all-time highs, bitcoin is down 33%, and Ethereum is down 23%. Many altcoins are down double-digits, too.

So, what’s behind the latest pullback?

Last week, Musk made waves when he announced his company would no longer accept bitcoin for car payments…

He said bitcoin is “very bad for the environment. It uses a lot of coal. We’re not going to take bitcoin anymore.”

But it’s a stunning reversal from three months ago when Tesla bought $1.5 billion worth of bitcoin… Now out of the blue, Musk is ranting about bitcoin mining not being eco-friendly.

Millions of people look at Elon Musk as a God who walks the earth in human form. And that’s not an exaggeration…

If Elon Musk said, “Drink the Kool-Aid” or “Let’s take a spaceship ride to Mars,” millions would follow him.

Now, Elon Musk is clearly a brilliant man. But he’s not being intellectually honest about bitcoin’s environmental impact.

It’s not that he’s stupid. He knows most of the energy used by bitcoin miners comes from renewable sources. (I addressed this in Monday’s Daily. You can read it here.)

So what’s at play here?

I believe it all comes down to energy credits.

Simply put, energy credits are a way to encourage the production and use of green energy while discouraging the use of fossil fuels. Here’s how they work…

First, the government limits the total emissions and/or energy consumption in a country or state and then divides that limit among energy producers and companies.

If a company goes over its limit, it offsets its excess by buying energy credits from a company that’s under its limit… usually companies that produce energy from renewable sources like solar or wind.

So, energy credits create an incentive to use less energy and/or produce renewable energy (the profits from selling credits) while making it more expensive to produce or consume energy from fossil fuels (the cost of buying credits).

Tesla falls into the renewable side of the equation… it relies on these energy credits to help massage its earnings.

If the Biden administration concludes bitcoin mining is bad for the environment – and I’m not saying it will – it may crack down on the industry.

And if Elon Musk is seen promoting bitcoin… then the administration may take away his special energy credit goodies.

I’m not saying this will happen… I don’t know if the Biden administration will take any action for or against bitcoin.

But it makes sense for Musk to look out for the best interests of Tesla. After all, he owns an estimated 170 million shares in the company worth $100 billion.

Now, many people are lemming-like in their adoration of Elon Musk. So, they’ll automatically assume, “Oh, my goodness. If Elon says bitcoin isn’t great… then I should get out of it and just buy more Tesla shares.”

I’d love to tell you this is over or that it will end soon. But my research indicates the weak hands are going to keep selling their bitcoin. We could see bitcoin tumble down to $34,000–$38,000 before this shake-out is over… or not.

The point of my message today is that no matter what happens over the short term, I don’t want you to lose a moment of sleep over it.

Don’t Be a Sheep

This recent pullback reminds me of what we went through in March 2020. That’s when bitcoin dropped 50% in a day during the early days of the COVID-19 pandemic.

The market can fall 50% tomorrow, and you shouldn’t lose one wink of sleep over it…

Your job is not to figure out how to fix the loss. Your only job is to enjoy your family and live your life…

If you try to get “smart” with your long-term money, you’ll fritter away your capital. And you’ll likely cause yourself an extra five to seven years of work just to recoup your losses…

Let me repeat that: You DO NOT sell into weakness. That’s a no-no. That’s a sheep move. If you decide you want to trim some exposure (and I don’t recommend that), then you do it into strength.

The golden rule of bull markets is to sell into strength when you must and buy into weakness when you can. That’s the blueprint for how you get rich from a powerful trend.

That is why I want you to view this pullback as a gift.

Look at the chart below. It shows the last crypto bull run in 2017… 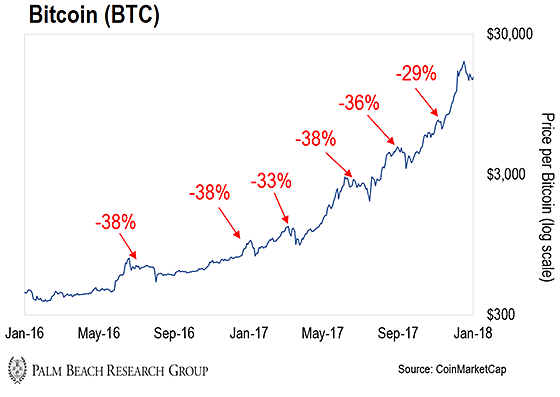 As you can see, we had six major pullbacks during that bull run. And selling into them would have cost you significant profits.

So don’t do it now. It’s a mistake you’ll cry over for the rest of your life.

Don’t be a sheep. Instead, I want you to think like the super-rich.

Think back to March 2020 – right as the pandemic started roiling the economy.

Both the crypto and equity markets collapsed as much as 53% and 34%, respectively. Today, we can look back at those events as one of the biggest wealth transfers in history.

Those are the types of opportunities you have during extreme market dislocations like we see now.

If you can look at your financial setup and say, “Okay, I have extra cash, and I don’t need to use margin. It won’t put my current lifestyle at risk…” then you should absolutely consider buying more bitcoin and Ethereum on this pullback.

Friends, I’ve been a sheep before. So I know what happens when you sell your assets out of fear. The patient sharks come in and gobble them all up.

That’s how the Wall Street sharks have gotten so crazy rich. They patiently wait for fearful investors to dump their holdings at bargain levels, and they feast on the financial future that you threw away

I am not going to let that happen.

That’s why I am here to tell you to stop feeding the sharks. There’s no law that says you can’t be a strong-minded holder. Nothing can force you to sell.

I want you to break free of any sheep-like mentality. And understand we’re still early in the crypto adoption cycle.

There are only 100 million crypto users in the world today. Five billion people own mobile phones, which are gateways to the crypto market. And there are more than seven billion people on the planet.

Will there still be volatility? Absolutely. I promise we’ll still have days when you wake up and see everything down 40−50%. But who cares? It’s a blip compared with where we’re going.

Based on my research, I predict bitcoin will be worth $500,000 within five years. So, you must look at the long-term picture.

That’s the perspective you need to have to make huge money from bitcoin. I want you to frame its volatility in terms of where it’s going, not where it’s been.

If I’m right and bitcoin goes to a half-million, there’s still more than 11x upside from here. Now, imagine you missed it. What does that do to your financial life? It ruins it. It feeds it to those parasitic sharks that feed off fearful investors.

So stay focused on the big picture. If the volatility makes your stomach churn, turn off your computer and do something else.

My primary job is to make sure you make the right decisions. And now, the right decision is to either hold your crypto assets or buy more. Don’t panic sell. If you do, you’ll look back on it as one of the most damaging life decisions you ever made.

Stay strong and trust in the research. I know it’s tough. Some of you have millions of dollars in crypto profits, and you’re going to watch some of it get temporarily wiped out. But the keyword here is “temporary.”

As time passes, you’ll look back on this volatility as a tiny blip on the chart the same way you look at the 2017 volatility today… Just like the 2017 action, you won’t even see it on a price chart… In fact, you’ll have to blow the chart up just to see the dip.

That’s how much runway I see left in bitcoin and Ethereum.

Friends, I want you to print this essay and put it somewhere safe. One day, you’ll look back on it and say, “Good Lord, thank goodness I listened to Teeka’s advice. This guy saved my financial life.”

P.S Even after bitcoin’s recent pullback, a $30 trillion revolution in one underlying crypto technology is just getting started…

Any one of these could have made you a millionaire many times over, starting with very little. And that’s why I recently shared the details of my No. 1 investment in an exclusive interview.