Nick’s Note: Bonds are on pace to have their worst performance since 1976. In today’s essay, my colleague, Palm Beach Letter analyst Greg Wilson, shows you how to prepare for this bear market…

Take a look at the table below. It shows the annual returns of the Bloomberg Barclays U.S. Aggregate Bond Index dating back to 1980:

The index covers roughly 8,200 fixed-income securities. And its total value is roughly $15 trillion. It’s basically the bond version of the S&P 500.

What do you notice in this table?

That means anyone under 40 years old has never seen a bond bear market in their lifetime.

I bring this up because this year, bonds are on pace to have their worst performance since 1976. And as I’ll show you in a moment, it may be just the beginning.

That’s important because there’s a good chance bonds will finish 2018 with their first losing year since 2013, and only the second losing year in the last 19 years.

In the past, a down year in bonds has always been followed by an up year. But this time could be different.

Let’s take a long-term look at the U.S. 10-year Treasury rates to get a better big-picture view… 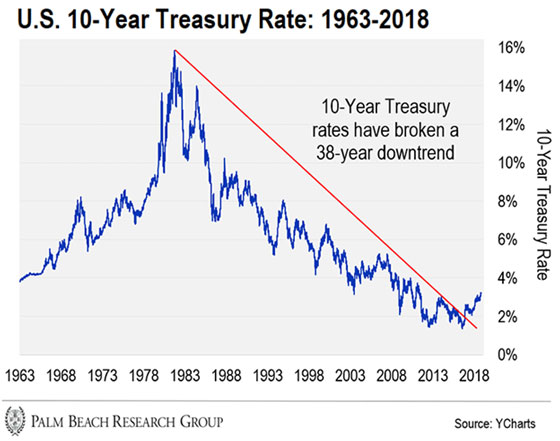 As you can see, rates spent the last 38 years declining—meaning, bond prices were going up. It was a long bond bull market… But now, the trend has been broken. And the data says the bond bear market is just starting.

I see three more reasons why you should be cautious of bonds going forward: rising interest rates, rising inflation, and rising debt.

The Federal Reserve has hiked interest rates eight times since December 2015. And while Fed chair Jerome Powell recently said the Fed is close to getting rates to neutral, it’s up for debate on what exactly that means. The point is, it’s likely we’ll see more rate hikes in 2019.

The federal funds rate influences interest rates across the economy. As the rate rises, so does the cost of doing business. To compensate for the increased costs, bond investors will want higher yields. And that means lower prices for bonds.

The costs of goods and services are rising. As prices rise over time, purchasing power decreases. To compensate for the loss of purchasing power, bond investors will demand higher yields—which, of course, means lower bond prices.

The recommended debt-to-income ratio is 35% or less. So most of U.S. revenues will go to debt servicing, leaving little for everything else. That’s risky. Bond investors will demand higher yields to compensate for this risk. That means lower bond prices as well.

With a bond bear market headed our way, what’s an investor to do?

How to Avoid the Bond Rout

We like to buy high-yielding CEFs that are trading at a discount to their assets. It’s our favorite strategy to beat Income Exodus.

CEFs are an investment structure with shares traded on the open market. They’re similar to exchange-traded funds (ETFs)… But there’s one main difference: CEFs do not issue shares daily.

That means CEFs can trade on the market at prices different from the value of their assets, called the net asset value (NAV).

When a CEF trades for less than its NAV, you can buy it at a discount. This means you could buy, for example, $1 worth of assets for just 90 cents.

Another strategy is to pick up high-quality stocks that have the pricing power to beat inflation and pay increasing dividends.

This Market Signal Is Flashing Rebound

That’s what Palm Beach Trader editor and our Wall Street insider Jason Bodner told me over the weekend. So far, it looks like he’s right on.

Jason’s system tracks nearly 5,500 stocks every day to see what big institutions are buying and selling. In February 2018, the system called the top of the market.

Today, his system is signaling the bottom.

As you can see in the chart below, when his ratio signals oversold, the bottom is typically near… 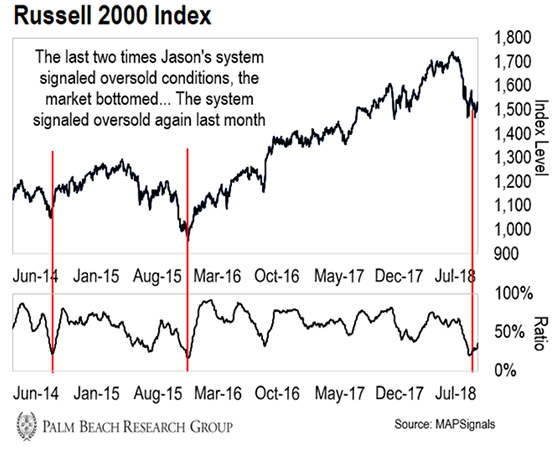 And Jason’s signal just flashed oversold… That’s why he’s so convinced the market is going up.

We just launched this new program, and we believe it will interest you.

It’s called an “Open House,” and the idea is very simple: We want you to have the opportunity to try all our current research services, even our most exclusive and expensive work, between now and January 7—for just $199.

You’ll have full access to all the research of Teeka Tiwari, Mark Ford, Bill Bonner, and Doug Casey—and much more…

But this deal expires tomorrow at midnight. Click here to learn how to start your trial subscription today…