In May, Arch Coal—which recently emerged from bankruptcy—started paying a 2% dividend.

And Peabody Energy (also freshly out of bankruptcy) announced it would start a dividend program next year.

The main reason: Coal profits were up 76% this past quarter.

That shouldn’t come as a surprise to regular Daily readers.

Back in June, we told you coal would have a good year.

At the time, I got invited to the grand opening of Corsa Coal’s new mine in Somerset, Pennsylvania, as part of my Rust Belt tour.

While there, I chatted with Corsa CEO George Dethlefsen.

George told me coal mining was about to get a lot more fun because President Trump would reduce regulations on the industry.

And he was spot-on…

We hope you followed our advice at the time… Since then, the VanEck Vectors Coal ETF (KOL) is up 20%. 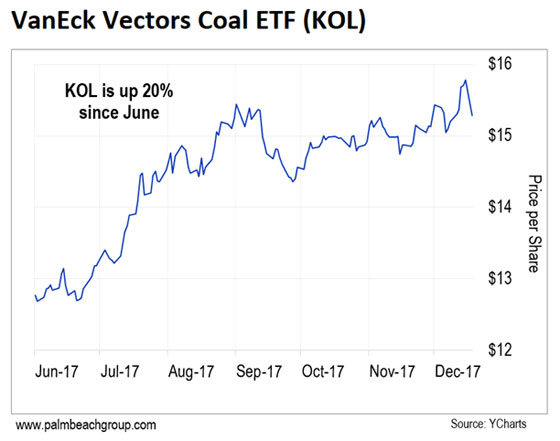 And coal’s run is just getting started…

The Future for Coal Looks Bright

The U.S. economy is strong. And that’s good for coal. When the economy is growing, factories use more power.

For those who didn’t know (or may not recall), there are two main types of coal.

Most people are familiar with thermal coal. Power plants use it to make electricity. It’s the “dirty burning” coal environmentalists are trying to rid the world of.

The other type is metallurgical coal (also called “met” coal). It’s used in the steelmaking process. Met coal is sold to companies that produce coke—a modified version of coal. Steelmakers use coke because it generates intense heat that can melt metals.

As evidenced by the rising prices, demand for both types of coal is strong. As you can see below, both met and thermal coal are up over 100% from their 2015 lows. 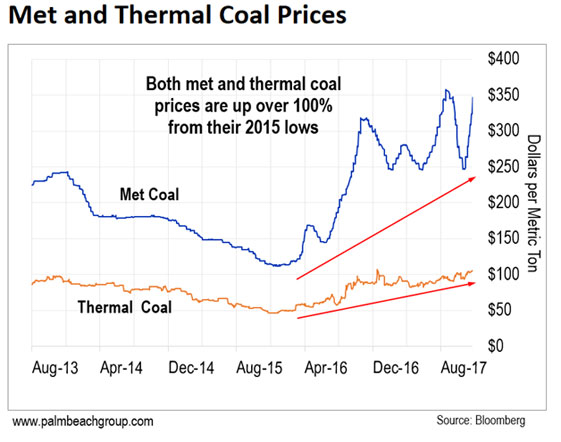 These higher prices have helped push profits up.

With the economy not showing any signs of slowing down, coal companies are confident they can reward shareholders.

Peabody is buying back $500 million worth of shares—or over 12% of its outstanding shares.

These rewards are working.

And this is likely just the beginning. We told you back in June that coal companies had the potential to rise 300%. We stand by that.

Chris Mayer is so convinced the card he’s holding below is your best chance to make 10-to-1 from a single stock over time in today’s market… that he’s putting more than $1 million on the line to prove it to you.

Learn more about his challenge here… 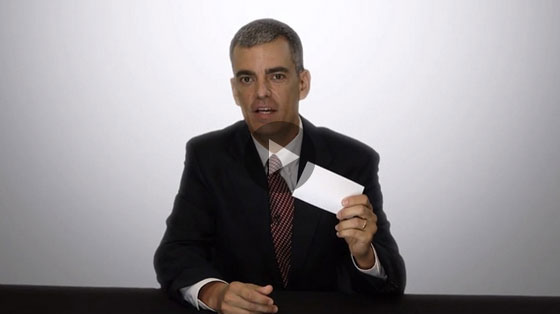