The market was coming off a huge rally. Stocks and bonds were up 17% and 34%, respectively, for the year.

The year before, we had fabulous economic growth. The overall sentiment couldn’t have been better.

And then… all hell broke loose.

Then one day… just like that – bam! My computer screen started bleeding red.

All my positions were down… big.

It was a nightmare.

I received ear-splitting calls from angry clients. My office was in a tizzy. Investors panicked. Stocks plummeted.

But everything I just told you is exactly what I experienced back in 1994.

At the time, I was 24. I’d been working on Wall Street for six years, but nothing prepared me for that carnage.

In 1993, the U.S. economy was humming along… GDP was growing at an inflation-adjusted 2.8%… And the market was hitting all-time highs.

Then the Federal Reserve rained on the parade…

Worried about the economy and a modest uptick in inflation… the Fed turned hawkish. Starting in February 1994, the central bank nearly doubled its policy rate to 6% in seven rapid-fire hikes over 12 months.

The rate hikes spooked investors and the markets tanked.

Later that year, Russia invaded the republic of Chechnya, creating more volatility into 1995.

At the time, it felt like the world as I knew it was ending.

But I – and everyone else at the time – was dead wrong. The world wasn’t ending.

Instead, it was the absolute best time to buy stocks. 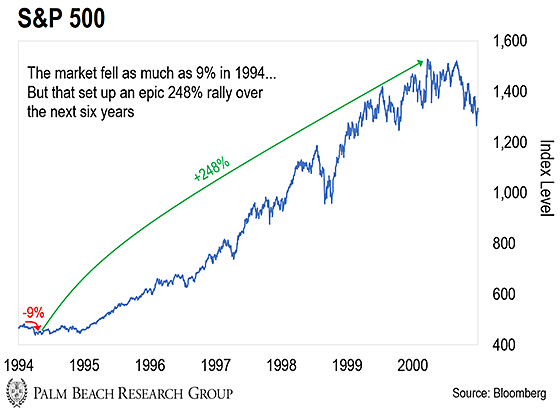 The market activity between 1994–1995 parallels what we’re witnessing today.

To me, that suggests another bull run is right around the corner…

History Is Repeating Itself

In retrospect, I now know what happened from 1994–95 was merely a short-term positive to negative shift in sentiment.

In other words, it was merely the start of a “cyclical” bear market, not a “secular” one.

“Secular” markets are long-term, one-way directional moves up or down. They typically last between 12 and 20 years.

Within each secular market, there are short-term moves opposite of the main trend. These are the “cyclical” markets, which tend to last nine to 18 months.

The chart below shows a history of secular and cyclical markets over the past century, measured by the Dow Jones. 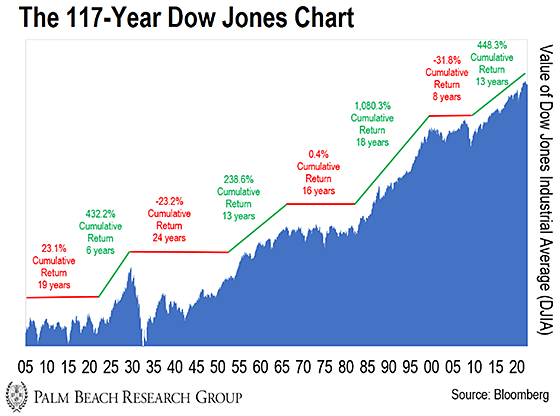 As you can see, individual secular markets have lasted for as long as a quarter-century.

The big-picture moves can be higher (the green sections) or sideways/lower (the red sections). But short-term, cyclical moves happen throughout.

The average peak-to-valley drop during those cyclical bear markets was 17%. However, the average recovery to new highs was just 94 days.

And as far back as October 2014, I said we were in the middle of the next secular bull market… one that would last until 2028. Now, this bull run hasn’t been a straight shot up. We’ve seen corrections and crashes along the way, including the most recent pullback…

Just like then, years of strong growth have caused higher inflation… the Fed is raising rates to cool the economy… And the markets have tanked.

It’s the perfect recipe for a short-term bear market within a long-term bull market.

It’s painful and scary… but it’s also an absolute gift.

Buy great names and hold them. That’s it.

In my opinion, the 1994–95 downturn was the single-best buying opportunity of the entire decade…

If you dared to buy blue-chip stocks back then, you would’ve made a killing over the following five years. The risk/reward ratio was fantastic.

There was no fundamental reason for the sell-off. They were high-quality companies with high-quality earnings. They made billions in revenue.

If you recognized these were world-class assets… you could’ve made a fortune buying them when everyone else thought they were toxic.

These cyclical bear markets are like an “in-game reset”…

If you missed the beginning of this bull market, these in-game resets give you a rare chance to start over and capture all the upside as the secular bull market resumes.

You just have to tune out the negative news and focus on acquiring great names at bargain prices.

My research suggests we will be in a secular bull market in stocks until 2028, so there’s still plenty of upside to capture.

I know that’s an outrageous prediction to make… especially given all the volatility this year.

And I realize this isn’t the message you might want to hear.

Your portfolio’s down… food prices are climbing because of inflation… and watching the news each night is terrifying.

So I get it if my message is making you uncomfortable…

I got a similar reaction in 2014 when I said we’d be in a secular (long-term) bull market in stocks. Very few people believed me then. But those who followed my research made a ton of money.

Like then, I promise to tell you what you need to hear… not what you want to hear.

It’s exactly what I demand from fund managers who handle my money. It’s the same yardstick I hold myself to in all my newsletters.

And what you need to hear right now is that it’s not the time to sell.

Instead, it’s time for you to buy world-class assets…

Companies with pristine balance sheets… competitive moats… strong dividends… and that are trading at discounts to their historical valuations.

In the case of cryptos, these are projects seeing widespread adoption… using groundbreaking technology… and have the potential to 10x your money over the next five years.

If you have some dry powder and it makes sense for your financial situation, these are the ideas you should look for today.

P.S. The downturn in crypto is turning some of the best projects into bargains… and “unlocking” previously inaccessible corners of the crypto market to everyday investors.

That’s why I recently put together a presentation highlighting one of these “unlocked” crypto sectors… one that’s estimated to grow nearly 38,000% in the years ahead.

To find out how to take your first steps into this massive, unlocked opportunity, click here… But please do it soon.

When the dust settles in crypto and prices rebound… the bargains we’re seeing today will be few and far between.