Many readers get upset when we talk about what’s happening in Washington, D.C. They think we should stick to the markets and avoid politics.

And they’re right… That’s why we don’t talk about Trump’s tax returns or the Mueller investigation in the Daily. None of that matters to your pocketbook.

But Washington is too big and powerful to ignore. That’s the word from Ben Phillips.

Ben is the chief investment officer for investment firm EventShares. Last month, I saw him speak at an exclusive conference in Myrtle Beach, South Carolina.

Only 90 analysts and investment managers attended the invitation-only meeting. And it’s closed to the media—so speakers can share their best ideas without worrying about leaks.

Now, Ben began his presentation by saying investors could beat the market by 11% annually. Hearing that, I immediately sat up straight. And when he was finished, I even chased him down to get his permission to share this idea with you.

So these are the types of ideas that’ll help you achieve a dignified retirement.

But here’s the thing: There’s a lot of money flowing out of Washington, D.C.

And in today’s essay, I’ll show you how Ben’s strategy follows government policies to profits—and which one you should gain exposure to now…

According to Ben, government policy is a leading indicator of which industries will break out. So you should be looking for the companies that’ll benefit from this spending.

Now, he calls this approach “policy investing.” And he cited an ongoing Harvard Business School study showing how profitable it is…

The study is looking at lawmakers with vested interests in particular bills. It compares their voting behaviors to the economic activity and industries in their home states.

And without getting too far into the weeds, the study has found that constructing a portfolio of industries with enthusiastic support from their home-state legislators yields 11% in alpha per year.

In other words: By investing in these industries, you’d beat the market by 11% per year.

Although it’s well-known that policies affect entire industries, it’s difficult to pinpoint exactly which firms will benefit. And with hundreds of policy areas, putting together such a portfolio would be difficult for the average investor.

But that’s why you turn to our experts…

During the conference, Ben mentioned the coming infrastructure boom as his favorite investing story this year. And that shouldn’t come as a surprise to regular Daily readers…

You see, our very own Teeka Tiwari has been pounding the table on infrastructure.

On April 22, he told me that President Trump was about to enact policies that would make investors a lot of money. And one of the big areas was infrastructure.

Here’s what Teeka said then:

There are four major policies President Trump is pushing that’ll unlock a lot of growth in the economy—which will be good for the stock market. I don’t have time to go into all four today… But I will say that the biggest part of Trump’s plan is spending $1.5 trillion on infrastructure.

And so far, he’s been spot-on…

Both Nancy Pelosi and Chuck Schumer met with President Trump last Tuesday. And they agreed to a preliminary $2 trillion infrastructure package to upgrade the nation’s roads, bridges, airports, rail lines, waterways, and even broadband internet access.

This is giving the entire industry a tailwind… In fact, the Industrial Select Sector SPDR Fund (XLI) is up 20% this year. That outperforms the S&P 500, which is only up 16.5% in the same time.

And if you want broad exposure to policy investing—including infrastructure—you can consider the U.S. Policy Alpha ETF (PLCY). The exchange-traded fund is managed by EventShares.

P.S. If you’re interested in specific policy areas that’ll benefit from the Trump administration, Teeka has his eye on three other industries. And he’s identified three companies in each that he believes will benefit from Washington.

If you’re a Palm Beach Letter subscriber, you can learn their names in his special report right here.

And if you’re not a PBL subscriber, you can learn how to get risk-free access to The Palm Beach Letter for just $49—a 75% discount off the regular price—right here.

Will you be following President Trump’s policies to profits? Or maybe you’ve already started… Tell us how it’s working for you right here.

PBRG guru Teeka Tiwari is revealing a major upgrade to his trading strategy.

If he were still running his hedge fund, this would be the No. 1 strategy he’d use to help his clients grow their wealth right now. And if you act quickly, it could change your life… 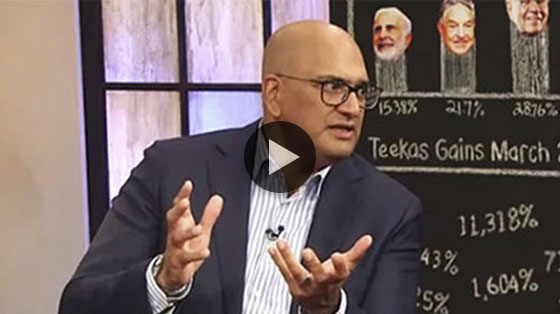