Nick’s Note: Like us at the Daily, Emmy-award winning journalist John Stossel is a fan of bitcoin.

John bought bitcoin when it was less than $200 per coin. He’s donated some of his gains… but he continues to hold a few bitcoins. Read on to find out why…

Nick: John, I recently watched one of your interviews from 2013 on the Fox Business channel. And you were talking about bitcoin. Can you tell us how you heard about it and when you got in?

John: A long time ago, one of the producers on the show brought in someone who talked about bitcoin. And I found it very intriguing.

I also had a TV producer who worked for me who got me really interested. Her name is Naomi Brockwell. But many know her now by a different name—Bitcoin Girl. She’s making bitcoin music videos and moderating bitcoin conferences now.

There was a lot of excitement from the people around me.

I don’t know exactly when I got in… But I know I paid less than $200 per bitcoin.

Nick: That was a great investment. Did you sell some along the way or are you still holding on?

John: I sold some along the way. I bought a lot of people gifts from Overstock.com. The company’s CEO is a forward-looking individual and liked bitcoin as well. Overstock was one of the few places I could spend bitcoin in the early years of cryptocurrencies.

I also gave a lot to charity… which was harder to do than it should have been. Some charities just said, “No, we don’t accept that…”

I ended up making a large donation to the Doe Fund (a nonprofit charity in New York) because they were willing to open a crypto account and accept my bitcoins.

I wanted to donate the bitcoins themselves because I had so much in capital gains. If I had sold them first and then donated the cash, I would have had to pay capital gains taxes on them… And then the charity would have gotten considerably less money.

I’m still hanging onto a few as well.

Nick: That’s smart tax planning. A lot of people don’t realize that if you donate appreciated property like bitcoins or shares of Apple, you don’t have to pay taxes on the gains. That’s something I would encourage all readers to look into.

Can you tell us what initially drew you to bitcoin?

John: As a libertarian, I like the idea of private, competing currencies. It’s a way to hedge against the risk that some idiot politicians will destroy the value of the fiat currency.

“Fiat” currency is a terrible word. Most people have no idea what you’re talking about when you say that. I think a better term for it is “green pieces of paper with dead presidents on them.”

Anyone holding onto these “green pieces of paper” runs the risk of politicians printing money to pay for all the ridiculous promises they make. And in the process, destroy the value of the dollar.

So to me, bitcoin made a lot of sense. To me it was the same thing as buying gold and silver. You’re doing that to protect your assets.

I have gold and silver coins. And I have a box of junk silver as well. I don’t want to hold my savings in this government, fiat currency.

So that’s why I bought into bitcoin.

Nick: I agree, for me bitcoin and gold serve a lot of the same purposes. I think the gold bugs are starting to catch on.

So do you have an opinion on where the price of bitcoin is going?

John: Bitcoin could go up, down, or sideways. I don’t know. And I don’t care. I’m holding it to diversify my assets.

To be honest, at this point in my life, I don’t like thinking about money and investments that much.

I prefer to spend my time thinking about liberty, free markets, and beach volleyball.

And bitcoin gives you liberty—it gets you out of the state-controlled money system. That’s why I’m holding on.

Nick: I think that’s as good a reason to hang onto bitcoin as any other. Thanks again for talking with us, John. Have a good one.

A Note on Crypto Risk Management

Regular Daily readers know we’re big fans of cryptocurrencies. That’s because they’re one of the few asset classes that can help you turn a small amount of money into life-changing gains.

Cryptocurrencies are volatile. So small position sizes will allow you to keep a cool head during extreme periods of volatility like we’re seeing in the current crypto market.

Nick’s Note: John spent 28 years as an award-winning journalist for Fox News and ABC News, where he anchored the primetime news magazine 20/20. He’s won 19 Emmy Awards for his work.

So we’re pleased to announce that he’ll be joining us—and 15 legendary speakers—at our first-ever Legacy Investment Summit in Bermuda.

This is our biggest event of the year, and will include keynote speeches from some of the brightest minds in the financial world, including former hedge fund manager and world-renowned cryptocurrency expert Teeka Tiwari, PBRG co-founder Mark Ford, and many others.

Register now and you’ll get a $1,000 voucher to use toward any investment research service offered by us or our seven partner companies. This offer is only available until August 12. So click here to register today…

For the first time, world-leading cryptocurrency expert and former Wall Street hedge fund manager Teeka Tiwari has an investment announcement so BIG he has partnered with one of the most recognized radio and TV personalities in America to help get the word out to as many people as possible.

Teeka has teamed up with Glenn Beck to create a one-off special extended broadcast, The Truth About Cryptocurrencies.

Teeka’s found three new picks… which he calls “the three cryptocurrencies you absolutely must buy now.” And he’s giving away their names during this exclusive live online broadcast from Glenn’s Dallas studios on Thursday, July 19. 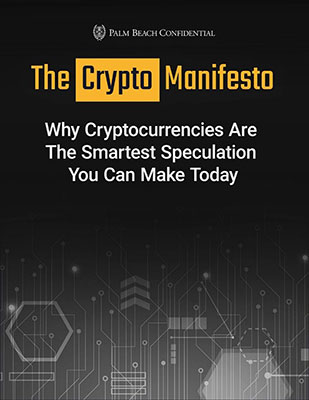