“Monster Gold-Mining Deals Pile Pressure on Those Left Behind.”

The January 14 Bloomberg headline above might not seem like much to you right away—but it immediately caught my attention.

When an industry consolidates, investors can make a lot of money. Consolidation means buyouts—which usually come at a premium… And premiums boost stock prices higher. [For example, see my January 15 essay on mergers in the biotech sector.]

But that’s not the only reason the headline caught my attention. Mergers among mining companies are signaling a shift in the gold market, too.

Regular readers know that we recommend holding a small percentage (5–10%) of chaos hedges like gold in of your portfolio. These assets provide insurance in times of crisis. But under the right conditions, they can also boost your wealth.

In today’s essay, I’ll tell you why 2019 is shaping up to be a year in which holding gold will start to pay off.

Over the past six months, the gold mining industry has seen two megamergers.

In September 2018, Barrick Gold bought competitor Randgold Resources for $6 billion. The merger made Barrick the largest gold mining company in the world… But that title won’t last long.

Last week, Newmont Mining announced it would buy rival Goldcorp for $10 billion. If the deal goes through, Newmont will unseat Barrick as the world’s biggest gold miner.

Expect this wave of consolidation to continue. According to Goldcorp CEO David Garofalo:

Both Barrick and Newmont Goldcorp still represent only six or seven percent of global mine supply, so it’s still a very fragmented industry and I think investors are rightfully demanding that there’s a bit more consolidation.

And miners aren’t just merging because the industry is fragmented. They’re merging because it’s also necessary for their survival. That’s why the pressure is on for them to join forces.

Gold Supply Is Drying Up

Over the past seven years, we’ve seen a massive bear market in gold. As you can see in the chart below, gold is down $600 from its peak in September 2011… 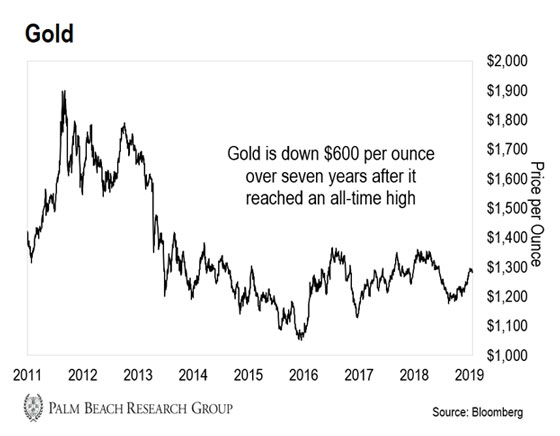 Due to lower prices, miners have had to tighten their budgets. And in tough times, one of the first budget items to go is exploration. After all, if gold isn’t profitable, why look for it? 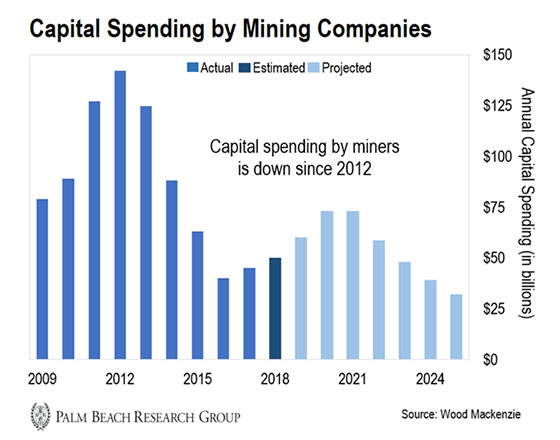 It hasn’t just been gold miners cutting back, either. Metals miners across the board have done so as well.

Capital spending is projected to be less than half of what it was at its peak in 2012. And smaller exploration budgets mean miners are finding fewer new deposits. On top of that, the new deposits aren’t as good as old ones.

In a recent private correspondence, Energold Drilling CFO Jerry Huang told me, “Mine grades and life are dwindling.”

He’d know… His company does the drilling for exploration teams.

Adding to the supply crunch are production costs. Over the past 15 years, they’ve skyrocketed about 300% for major gold companies.

When prices are low, miners aren’t making money. So they stop exploring new mines. The lack of supply creates scarcity. But scarcity eventually pushes prices back up.

That’s why miners are merging. They’re desperate for profits and hoping they can make up for lower profitability by increasing scale. But that’s a short-term solution.

Still, the long-term outlook for gold is positive. As gold becomes scarcer, prices will eventually rebound.

Now, it could take a couple years for this trend to play out. But when it finally does, we’ll see gold rise over 50% and reach new all-time highs.

The key is to get positioned now, before the move higher.

To capitalize on this trend, I recommend buying some physical gold… or shares of the SPDR Gold Shares ETF (GLD), which tracks the price of gold.

P.S. Do you plan to take advantage of lower gold prices and stock up? Let us know right here…

He revealed the inside scoop on an event that will transform the crypto market in 2019—and showed a leaked Wall Street document about what this event is.

So if you missed it, be sure to catch up right here… 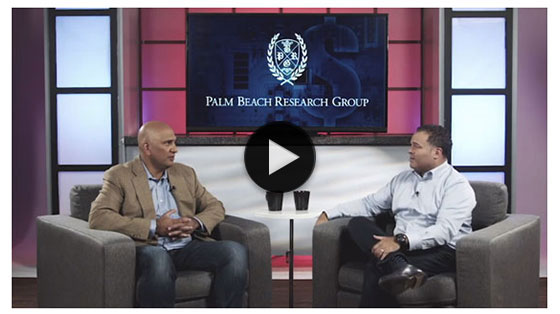