On January 3, pharmaceutical giant Bristol-Myers Squibb announced it would acquire its competitor Celgene for $74 billion.

It’s the largest pharma acquisition deal ever—and one that paid off for Celgene stockholders. The stock popped 32% overnight on the buyout news.

Celgene and Loxo have at least one thing in common—their strong pipelines of cancer treatments. That will be a big business in the coming years, as successful cancer treatments can sell for nearly $1 million each. (I wrote about this trend in February 2018.)

And these won’t be the last buyouts of the year, either—which is good for biotech investors.

So if you haven’t considered this sector yet, I’ll show you why it should be on every investor’s radar.

These Companies Are Money-Making Targets

At last week’s JPMorgan Healthcare Conference in San Francisco (the biggest healthcare conference of the year), Gilead Sciences’ chief financial officer said the company is “focused on M&A.” That stands for “merger and acquisitions.”

Other large pharma companies have signaled interest in buying smaller companies as well. Pfizer’s CEO said the company is interested in picking up mid- and late-stage therapies that it can develop and add to its existing pipeline.

One sign that big players like Gilead or Pfizer are targeting smaller players for acquisition is when they enter partnerships.

Collaborations like these are common… Bigger companies with cash will help fund smaller companies through testing and approval stages. And the partnerships give the larger companies rights to some of the profits.

So I expect to see more money-making opportunities like the Celgene and Loxo buyouts this year. What’s even better? Last quarter’s market crash has made the prices of potential buyout candidates even more attractive…

Also at the JPMorgan conference, Merck CEO Ken Frazier said his company has “tried to consummate some deals.” But it hasn’t signed any yet because the values of acquisition targets are still too expensive.

But Frazier added, “With valuations coming down, it creates more possibilities.”

He’s right… As tracked by the SPDR S&P Biotech ETF (XBI), you can see that from their peak, biotech companies fell 35%. While they’ve bounced since then, they’re still down 20% as a whole: 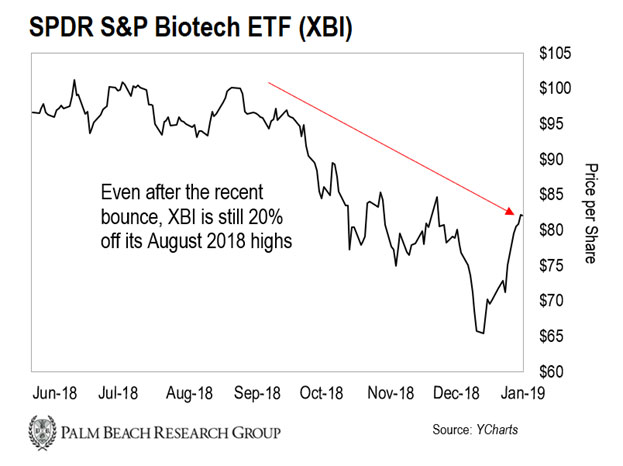 And some individual companies are down 50% or more. That makes them even more appealing buyout targets. If the recent buyouts are any sign, smaller biotech companies could be more significantly undervalued than that.

The 32% premium Bristol-Myers paid for Celgene suggests that valuations for these companies are low… And as I said, with some of these companies being down 50% or more, there’s plenty of room for their premiums to rise.

The market is starting to realize this sector is cheap—especially the small companies that are buyout targets for larger players.

Just look at the ALPS Medical Breakthroughs ETF (SBIO). The exchange-traded fund holds a basket of small companies with drugs waiting to be approved—the types that larger players are targeting.

As you can see in the chart below, the market correction decimated SBIO, but it’s now bouncing back… 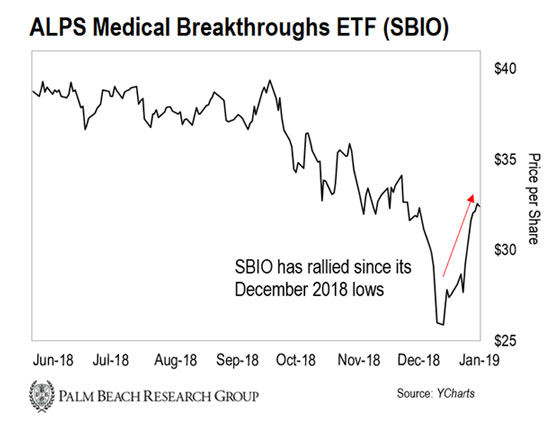 This fund is how I’d play the merger wave hitting biotech companies. But since it’s rallied so hard, I’d wait for a pullback to around $30 before buying it.

And if the market has a temporary pullback—like we think it will—that will be the time to consider SBIO.

Remember, the companies held by this fund are very volatile. Owning a basket of them lowers the risk somewhat—but they can still move a lot. Select your position sizes carefully.

P.S. As I wrote above, finding biotech buyout targets can be a profitable, money-making opportunity. And that’s exactly what my colleague Jason Bodner’s proprietary stock-picking system does…

Jason is the editor of Palm Beach Trader. And his system scans nearly 5,500 stocks every day looking for the best companies getting bought up by big institutions. For instance, on January 16, 2018, his system signaled institutional buying on Bioverativ. Six days later, pharma giant Sanofi bought it for a 60% premium.

From Bea A.: Thumbs up on the beard! Looks great. But whether your fans like it or not isn’t as important as whether you do!

From Norman W.: Hi Teeka, do you have any pictures of yourself with hair on your head? And would it make any sense to write an autobiography (details) of your formative years? Aloha, and best wishes for the coming year!

From Pooja T.: Please forward to Teeka that the goatee needs to go. The fresh-shaven look was appealing. Have a great 2019 all!

From Peter T.: Shave the beard ASAP. It makes you look like someone who needs to try to have an image rather than the person we know is transparent and who we can trust… This is really bad news for your PR.

From Roger H.: Hi Teeka, since you asked for feedback on your facial hair, here’s mine: A nice, trim beard can make a mature man look quite distinguished and help a younger person look more mature.

The problem is that as we move through the mature years of our life, the grey appears—unevenly, at first. When it comes in mottled or blotchy, it makes us look old, but not distinguished. I shaved my red beard off when this happened to me.

From Greg H.: You’re now sporting essentially the same facial hair as I have for many years. It looks good on me… and it looks good on you, too! The one concession I make to my wife is that when we’re about to be intimate, she asks that I spread a generous amount of coconut oil on my mustache to soften it for kissing.

If that’s your wife’s complaint, I recommend our solution. The nice thing about coconut oil is that it’s completely edible and doesn’t have a funky taste like a lot of artificial lubricants do. Good luck on keeping your beard.

Musk put $70 million of his own money on the line to start Tesla. His dream is to fill America’s roads with electric cars. And with 300,000 Teslas on the road today, some think he’s on his way to achieving it.

But soon, it could all come crashing down. And one tiny company could be responsible… 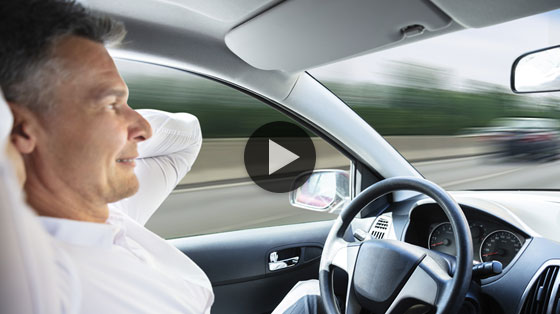