Please keep posting your information and lists of the fastest-growing profitable and cheap companies! That is the kind of research that made me an Infinity Member!
—Lance F.

Count me in as someone who would be very interested! Anything to help in the process of choosing good stocks would be appreciated (as this series already has). Thanks.
—Doug M.

Over the past week, we introduced Daily readers to our three-step method for picking elite stocks.

We asked the Palm Beach community if you wanted us to keep a periodic list of these types of companies… and the response was overwhelming.

We received dozens of letters from subscribers like Lance F. and Doug M. urging us to keep a list. (Check out Wednesday’s Mailbag for more responses.)

And we can’t blame them…

These are the types of companies that have tripled the annual returns of the S&P 500 over the past 20 years.

Just look at the chart below to see the difference. The red line is the cream of the crop. We heard your feedback loud and clear. So we’ll keep a periodic list of potentially elite companies that could climb that red line.

If you don’t want to be like 99% of people who stay on the black line (or below), you should learn our three-step method…

Here’s a quick recap of our three-step method…

The first step is to find companies with a high return on invested capital (ROIC). Just doing that would put you on the blue line in the chart above.

The second step is to find companies with a high ROIC and high growth. Just doing that would put you on the green line in the chart above.

The third step is to find companies with the first two steps that are also cheap. We look at three ratios to determine if an elite company candidate is cheap:

There are 4,200 publicly listed U.S. companies with market caps over $200 million.

Using our three-step test, we narrowed that down to the Daily Elite 25.

The “t” indicates a tie.

You should view this list like a basket. In other words, don’t just select a few companies from it a la carte style.

Instead, you want to own enough of these companies to give yourself a diversified portfolio.

As you can see, No. 1 on our list is multilevel marketing company Natural Health Trends.

Natural Health Trends sells health products through the internet in China (like Amway does in the United States).

It has the best ROIC. It’s fast growing. And it’s the cheapest company on the list.

But although NHTC passes our test, it’s a high-risk play.

Some Chinese companies have a reputation for sketchy accounting practices. And Natural Health Trends could be a target for Chinese regulators.

Don’t bet the farm on it.

We understand most people won’t have enough money to invest in all 25 companies on this list.

So we’ve highlighted 11 that would give you a diversified portfolio. You’ll get a slightly different return than the entire portfolio, but it should be close.

Just remember: The list will change over time as we remove companies that become too expensive and add new elite candidates.

If you want to pick your own companies, make sure you don’t choose them from the same industry. In other words, don’t load up on retailers or drug companies.

We hope this list helps you make a fortune in the markets… And if it does, don’t forget to let us know right here.

Over the past two days (here and here), we’ve told you that easing financial regulations would be a boon for banks.

One of the biggest beneficiaries of this trend is Goldman Sachs (GS).

Goldman employees have a history of holding high-level government positions. And Trump has tapped at least five Goldman alumni to hold important positions.

With all these people whispering in Trump’s ear, investors are looking for Goldman to thrive. And it has…

GS just broke out to a new all-time high, surpassing its previous high in 2007. 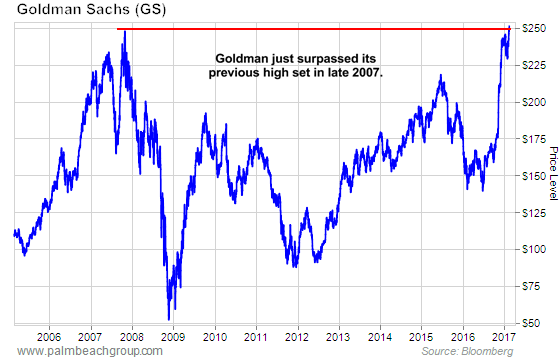 If Trump continues to roll back financial regulations, it’ll continue to be good news for this sector.

Inflation on the March: U.S. wholesale prices jumped the most in January since September 2012, led by higher costs of gasoline. That’s a strong indication that inflation is beginning to stir. If inflation continues to rise, we suggest you own some gold as a hedge.

Three Things That Can Derail Trump’s Agenda: The Trump administration is stocked with Goldman Sachs alumni. But the financial powerhouse takes a dim view of his agenda. The difficult process of unraveling Obamacare, a polarized political environment, and the lack of bipartisan support for his policies will make it difficult for Trump to push through his agenda. Looks like the guys over at Goldman Sachs are playing the ends against the middle.

Happy Times Are Here: Investors haven’t been this optimistic about the global economy since 2011. A full 23% of investors expect an outright “boom.” The optimism comes amid forecasts of global growth picking up as President Trump promises to cut taxes, boost fiscal spending, and loosen regulations. Bank of America surveyed global fund managers during the first week of February, with respondents having a combined $630 billion in assets under management. The level of optimism is the highest seen since the firm’s survey in early 2011.

Editor’s Note: Wall Street is full of confidence right now, but what about Main Street? Are you confident the economy is going in the right direction under President Trump? Let us know right here…

On Wednesday, we asked you about President Trump’s proposed border tax, and you replied…

From K.B.: Border tariffs are a good policy because nations like China and Mexico operate on different playing fields than the U.S. They don’t have to deal with issues like labor costs and environmental costs. The U.S. economy would be great again if left to its own devices.

By the way, excellent article on Trump’s backdoor operations (“How to Profit From Trump’s Sleight of Hand”).

From Bruce H.: I’m all for a border tax. Any additional revenue that can be generated to assist with our national debt is at least a beginning. I realize that it’s truly a drop in the bucket, but it’s something.

To a passerby, it looks like a small hill covered in trees and brush. But underneath that is a thick concrete shell. And beneath that is a complex of rooms and living spaces…

Now, as strange as it is to find an underground building deep in the backwoods of an isolated farm… it gets even stranger when you consider that the man who built it is a multimillionaire author and businessman…

So what is he doing way out here, working on a structure that looks like it could survive just about anything? Click here to find out…