In December 2017, President Trump signed Executive Order 13817. It mandated that the federal government secure all “critical” minerals that are vital to national security.

In May 2018, the U.S. Department of the Interior named 35 minerals that fit the “critical” definition.

Some are metals you’re probably familiar with… such as aluminum, arsenic, cobalt, graphite, and lithium.

(You can get the full list of the 35 critical metals from the Federal Register right here.)

We’re not geologists at the Daily. So we don’t know the uses of most of these metals. But we do go wherever the money-making opportunities are: stocks, cryptos, commodities… you name it.

One trend we’ve been profiting from this year is President Trump’s trade war. His penchant for imposing tariffs on allies and rivals alike is giving us an opportunity today to profit from one of the 35 listed metals…

The One Bright Spot Among Mining Companies

Earlier this month, I attended the annual Sprott Natural Resource Symposium in Vancouver.

Despite some fascinating presentations (see my write-up of Teeka’s discussion of cryptos at the conference), the mood in the mining community was somber. It’s been a brutal, seven-year bear market for most metals. These guys were disheartened.

But there’s one pocket of hope…

During his presentation, Doug Casey summed it up in one word: Uranium.

There’s a saying in the commodity space that goes, “The cure for low prices is low prices.”

When prices go down, miners stop producing the metal. That’s because it’s not profitable anymore. 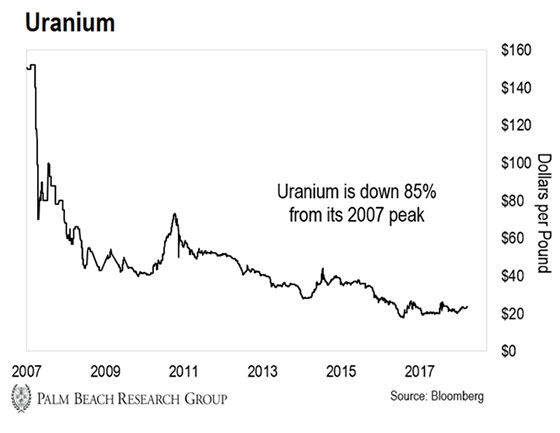 Word at the conference was that mining companies need uranium to be over $50 per pound to be profitable. The spot price of uranium needs to more than double for that to happen.

Now, falling prices alone isn’t a reason to buy something. But uranium may have reached a bottom… and there are three tailwinds ready to push prices back up.

Investors hate uranium today… but these three tailwinds will change that.

Kazakhstan recently decreased its production by 20%.

Cameco is the world’s largest publicly traded uranium company. The Canada-based miner shut down production at its McArthur River mine last year. That mine produced about 11% of the world’s uranium supply in 2016.

On top of that, most permitted U.S. mines remain unbuilt because it’s so unprofitable to mine uranium right now…

The impending supply crunch creates a problem for the U.S., and brings us to our second tailwind…

The U.S. only produces 5% of the uranium it needs… It imports the other 95%. That’s a huge problem. And that’s why uranium is designated as a critical metal for U.S. national security.

There are 99 nuclear reactors in the United States. They generate about 20% of U.S. power. The U.S. only produces enough uranium to power one of these reactors.

This brings us to our third tailwind…

Tariffs May Be Coming

Earlier this month, the Trump administration opened an investigation into whether uranium imports threaten national security. The move could lead to tariffs on the nuclear power plant fuel.

The Commerce Department says the probe will cover the entire uranium sector, from the mining industry to enrichment, plus defense and industrial consumption.

Now, tariffs aren’t imminent. It could take up to a year before the administration decides. But that doesn’t mean uranium can’t take off sooner…

In April 2017, the Trump administration started a similar probe of steel imports…

Investors bought the rumor. By the time steel tariffs were officially imposed in June 2018, we saw steel companies rise an average of 31%. 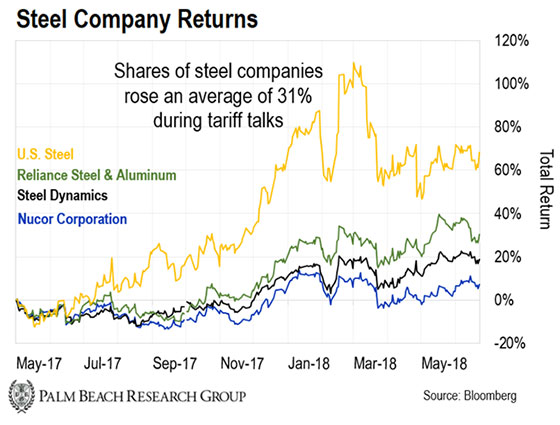 Now, just because steel spiked on the rumor of tariffs doesn’t mean uranium will, too.

But as I’ve shown you above, the U.S. designates uranium as critical to national security. And uranium supply is drying up.

The one-click way to add exposure to uranium miners is through the Global X Uranium ETF (URA). It holds a basket of uranium companies from around the world.

But I think the real bump will come from U.S. uranium producers… They’ll gain the most if Trump imposes tariffs on the metal.

P.S. Mining companies—especially the small ones that produce lots of uranium—are very risky. I think this is a situation like cryptocurrencies in which you could gain 10 times your money if uranium takes off… but you could lose everything if it doesn’t. So remember, never invest more than you can afford to lose.

One of the world’s richest families just auctioned off $832.6 million worth of art…

And their company just joined the world’s richest family, and two Wall Street legends, investing in this breakthrough technology most people aren’t paying attention to…

Get the details right here… 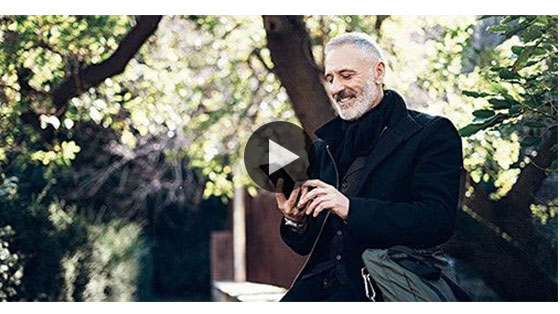