It’s a tall task to put a future value on bitcoin.

Old-school valuation methods don’t work for bitcoin and other cryptos.

Ratios like price-to-earnings, price-to-sales, and price-to-cash flow are irrelevant. Unlike companies in the stock market, bitcoin doesn’t produce revenues, earnings, or cash flows.

Now, that doesn’t stop investors from attempting to peg a future price… But if you’re trying to forecast bitcoin’s growth, it’s better to view it as technology rather than currency.

That may seem counterintuitive… but a principle called the Diffusion of Innovations Theory helps put this in perspective.

It’s been a consistent – and profitable – theory across a wide range of trends and periods… from the microwave to cellphones to the internet. 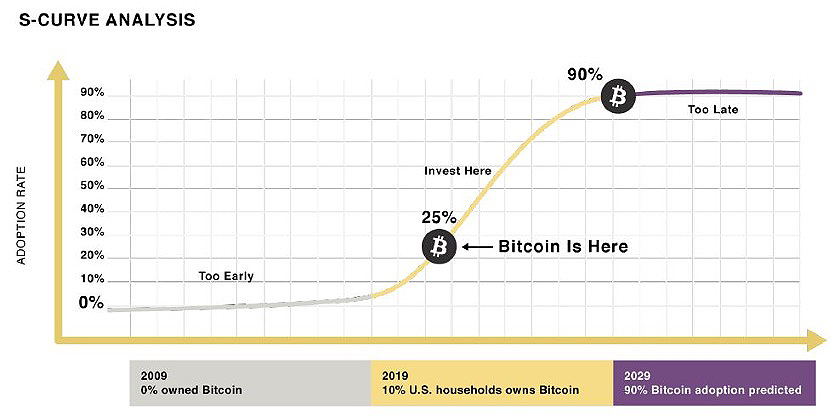 S-Curve analysis explores the adoption path of new technologies. As you can see in the chart, it took bitcoin 10 years to reach 10% adoption…

So, if the Diffusion of Innovations Theory holds true, it’ll take another 10 years for bitcoin to reach 90% adoption.

Knowing where a technology is on the S-Curve can help you determine whether you’re investing in a trend too early or too late.

It also suggests the sweet spot is between 10% and 90% adoption. That’s where the bulk of massive gains come from.

Think about computers. Apple invented the personal computer (PC) in 1976. In 1980, about one-tenth of 1% of households owned a PC…

Bitcoin is on the same path…

Back in 2016, few believed bitcoin was a viable long-term investment. It was called a fad and a fraud, and some even dismissed it as a currency for criminals. But we knew they were off the mark.

At that same time, Daily editor Teeka Tiwari told his readers to get in early… that the naysayers were wrong… and bitcoin adoption would explode.

To make a fortune in the markets, you just need to find an industry at the very beginning of a massive, multidecade trend.

Very often, these trends are poorly understood. And this lack of understanding can cause quite a bit of volatility. But I’ve discovered if you can get the trend’s growth trajectory right, you don’t need perfect timing.

The phenomenal growth of the underlying trend will bail you out…

And he was right.

Today, only about 25% of households own bitcoin. Even still, that’s a big jump from 15% of households when we wrote about this six months ago… and we still have a long way to go before we enter the “too late” to invest phase.

And that means bitcoin has room to go even higher… especially considering recent catalysts.

On the retail side, PayPal announced on April 20 that it would expand its crypto offerings to its Venmo payments app. Now, Venmo’s 70 million customers will be able to buy, sell, and trade bitcoin with as little as $1.

MasterCard and Visa both plan to launch bitcoin reward cards. Credit cards process $46 trillion transactions per year… Now, imagine half of those transactions earning cardholders 2% cash back rewards paid out in bitcoin.

And on the institutional side, in the last two months alone, financial services company State Street said it would start trading crypto… Goldman Sachs announced it would offer crypto to private clients… Morgan Stanley filed to add bitcoin exposure in a dozen of its institutional funds… and JPMorgan stated it would launch its first bitcoin fund this summer.

That’s a massive influx of new retail and institutional investors coming to crypto.

So, if bitcoin’s growth trajectory is akin to the internet, we’re now entering the middle innings of explosive mass adoption.

Now, if you’re still on the fence about adopting bitcoin, its S-Curve suggests there’s still plenty of runway left. So consider adding some to your portfolio today.

But mass adoption isn’t the only catalyst that will send bitcoin and cryptos higher… there’s another catalyst on the horizon, and it has the potential to skyrocket crypto prices as early as this year.

Since the birth of bitcoin in 2009, there’ve been several catalysts that have boosted crypto prices…

But whether it’s been increased institutional interest, or companies like PayPal expanding customer access, some of the most exponential crypto gains have occurred during what’s known as a “halving” …

You may have heard of halvings before… It’s a pre-programmed event where a crypto’s new supply is cut in half.

There’s an even bigger halving on the horizon. It’s what Teeka is calling the “Super Halving,” and his research suggests it will skyrocket the price of a handful of little-known investments…

It’s a set of special crypto recommendations Teeka has never written about or discussed before, but on Wednesday, May 12 at 8 p.m. ET., he’ll tell you how you can access them.

That’s when Teeka is hosting his special Super Halving Summit, where he’ll reveal all the details on this explosive catalyst… and share details about six crypto investments that should skyrocket as the Super Halving unfolds.

And if Teeka’s right, this halving could be as big as all the other halvings combined.

To learn more about the free Super Halving Summit, click here to reserve your spot… and Teeka’s team will send you all the details on this first-of-its-kind event.