He was so confident he could build a great mining company, he set his salary at $1…

In 1993, he took over as CEO of a small $50 million Canadian company called Goldcorp. By the time he was done in 2005, Goldcorp had grown into a $2 billion-plus company.

Investors earned 31% a year over his 12-year reign.

(That’s more than famed investor Warren Buffett, who makes about 20% per year. And more than legendary money manager Peter Lynch, who “only” made 29% per year for his fund.)

McEwen left Goldcorp a millionaire many times over. He could have stayed retired and enjoyed the good life. But the opportunity in gold was too much for him to pass up…

In 2012, he unretired to start a new company called McEwen Mining (MUX).

McEwen was so confident he could build another successful mining company, he set his salary at $1 per year. He believed his 25% stake in the company would more than compensate him.

So far, his bet has paid off.

Here’s why we’re telling you about McEwen…

Gold has rallied 8% since December 2016. And as we told you in yesterday’s Daily, this rally looks like it has plenty of room to run.

A safe way to play the rally is to buy a gold exchange-traded fund (ETF) or gold bullion.

But if you really want to swing for the fences in gold, the most powerful way to play the rally is through junior mining stocks.

And that’s where McEwen comes in…

How to Juice Your Returns From Gold’s Rally

“Juniors” explore for the next big resource deposits. They find the raw materials that keep our world running—like oil, gold, copper, nickel, and natural gas.

Large deposits of these raw materials are some of the most valuable assets on Earth. And when a small company finds one of these huge deposits, its stock price can rocket by 10-to-1 or more.

It’s a risky and speculative business, though… Most miners go bankrupt. So you have to be very careful when choosing them.

But you can make great returns if you identify the right one.

So if you’re considering speculating on junior mining stocks, here’s the most important thing you should look for in a company: a proven management team.

If management is skilled, that increases the odds that everything else will fall into place.

How do you know if the management team is any good? Just answer these two questions:

If the answer is yes to both of those questions, you’ve probably found a good junior mining company.

Let’s deal with the first question: Has management successfully built up a mining company before?

In the case of McEwen Mining, the answer is yes. Remember, McEwen turned Goldcorp from a $50 million company to one worth more than $2 billion.

So the first box is checked.

Now on to the second box: Does management heavily invest in the company?

Sometimes, this box is called “insider ownership.” Basically, we want to see if management eats its own cooking.

Again, the answer is yes.

So McEwen Mining checks both boxes.

But it does stack the odds in your favor… And it’s one of the most important things you should look into before buying a junior mining company.

P.S. If you’re thinking of adding some junior miners to your portfolio, you may want to consider Doug Casey’s International Speculator service. No other research group knows more about successful natural resources speculation.

In just the last 10 years, Doug’s readers have had a chance to make gains of 100% or more nearly 25 times. His team investigates the properties, grills management, and inspects underground deposits firsthand.

Recently, Doug’s team discovered a small, publicly traded small cap that owns the rights to a massive deposit in Canada. And when this news reaches the mainstream by April 2017… share prices could go parabolic. To learn more, click here…

Inflation is creeping back into the market…

The Producer Price Index (PPI) for Industrial Commodities tracks the prices U.S. sellers charge for commodities. And it’s rising at its fastest clip since the beginning of 2012. 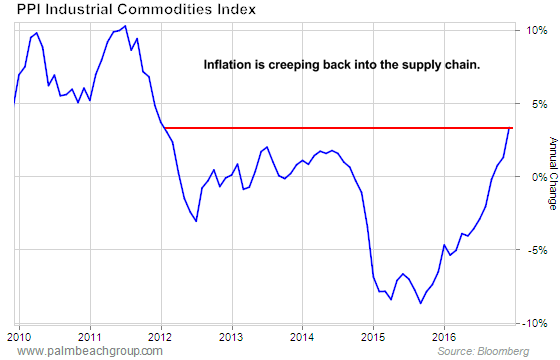 This is a major headwind for U.S. manufacturers.

For most products, commodities are the beginning of the supply chain… So look for manufacturers to either raise prices or accept lower profit margins.

One way to hedge against inflation is to own some commodities miners. At least your stock account will be able to offset the rise in product costs.

As we noted above, inflation is rising. And that’s pushing gold prices up…

Last month, PBL editor Teeka “Big T” Tiwari told readers not to worry about gold’s sell-off because prices would come roaring back. And that’s happened since. Gold is back at $1,235, breaking above its 100-day moving average.

If it continues from there, gold could make an assault on $1,275. In today’s must-see 3-Minute Market Minder (transcript included), Big T explains why you should ignore the noise in the mainstream press and focus on the big picture.

American Express on Blockchain Bandwagon: Credit card giant American Express is joining the Hyperledger project. It’s a collaborative cross-industry effort led by The Linux Foundation to create an open-source distributed ledger technology. Regular Daily readers know that as jargon for the “blockchain.” It’s not the first time AXP has dipped its toes into blockchain technology… The company invested in Abra in 2015, which is days away from Bitcoin functionality. There’s still time for you to join the blockchain bandwagon, too.

Robot Takeover: On another technology front, ZME Science reports that one Chinese factory has replaced 90% of its workers with robots. The mobile phone factory in Dongguan used to employ 650 humans. But now, it just needs 60 to get the entire job done… Robots take care of the rest. Meanwhile, product defects have dropped by a staggering 80%. It doesn’t look like the Great Wall of China (or one in America) will keep these robot workers out of the country.

Editor’s Note: What do you think is the biggest threat to American workers? Automation or immigration? Share your thoughts with us right here…