Baron Nathan Rothschild is credited with coining the statement, “buy when there is blood in the streets.”

Rothschild was an 18th-century British nobleman who made his fortune in textiles and the markets… primarily through trading foreign currencies and government securities.

Historians say Rothschild was a shrewd trader with a communications network that gave him early insight into market trends… along with the confidence to stay invested through misguided panics and sell-offs.

Here’s why I’m telling you about Baron Rothschild today…

Historically, market panics give investors great chances to buy world-class assets at fire-sale prices… and that means looking past fear and volatility to see what’s really going on.

That’s exactly what we’re seeing in crypto right now… And with bitcoin miners in particular.

But when you look at all the developments and upcoming catalysts in the crypto space… I’m confident it will end as another transformative year for the industry.

Once institutions get the story right and see this asset class for what it really is, bitcoin’s price will take off… and lift the best-in-breed crypto mining companies with it.

Last year, I introduced readers to a phenomenon I call the “Super Halving.”

As a refresher, the Super Halving refers to the time when the number of new bitcoin coming into the market will go down to zero.

Unlike previous halvings, this one isn’t built into bitcoin’s code. Instead, it’s created by outside forces. And it will have a major impact on the markets.

My reasoning behind this thesis is simple: Soon, bitcoin miners will stop having to sell their mined crypto to fund their operations.

Thanks to institutions embracing bitcoin, miners will be able to access traditional lines of finance through equity raises and borrowing. This will allow them to maintain ownership of the mined bitcoin on their balance sheets.

This will turn the miners into bitcoin piggy banks. Their asset bases will swell with each bitcoin mined. Simultaneously, this will cut off the incoming supply of new bitcoin.

And with no new bitcoin hitting the markets, prices will soar.

After the Super Halving, my portfolio of bitcoin miners initially rose as high as 73% in about six months. But recently, bitcoin has become highly correlated to the tech-heavy Nasdaq.

So as the Nasdaq has weakened, so has bitcoin. At this writing, the Nasdaq is down 28%… and bitcoin is down 55% from its all-time high.

The drop in bitcoin’s price has punched bitcoin mining stocks squarely in the face.

The average bitcoin miner is down 88%… And to the untrained eye, bitcoin miners look like they’re on the verge of bankruptcy.

Nothing could be further from the truth.

Across a broad range of names we follow, the average cost to “mine” bitcoin is $7,500. That’s 75% lower than the current price of bitcoin.

We estimate these companies have enough cash to fund their operations for another two years.

That’s plenty of time for bitcoin prices and investor sentiment to recover.

So these guys aren’t going out of business.

And despite the pullback in bitcoin’s price, miners continue to HODL (hold on for dear life) their bitcoin. That’s great news for us as investors.

My team closely tracks the number of bitcoin sent from the miners to the exchanges.

This tells us the amount of earned bitcoin the miners keep and which is unavailable for anyone – investors, institutions, or funds – to purchase. 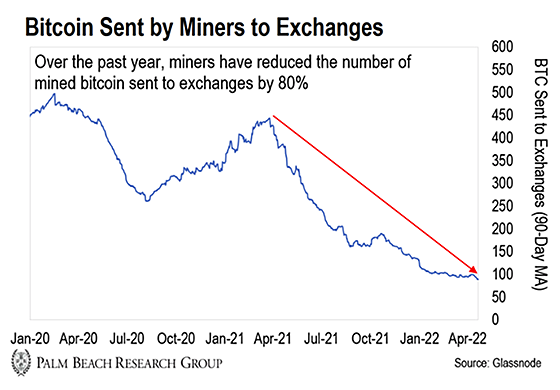 As you can see, miners are currently transferring around 89 bitcoin per day… a 14% drop from the 103 they were averaging a day back in January 2022.

This means the average miner has moved from selling an average of 11.4% down to 9.9% of its earnings… Meaning they’re retaining 90.01% of their mined bitcoin.

The following chart gives us the larger picture: The dwindling number of bitcoin available on exchanges. 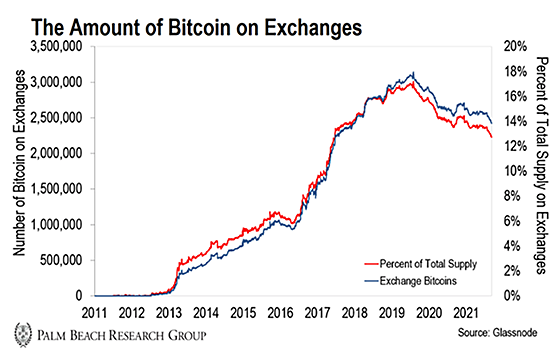 I had my team do a deep dive into the financials of bitcoin miners. And based on the latest hoarding data, we forecast miners alone to cause a 98.2% drop in new bitcoin hitting the market per day by next year.

That brings the newly available bitcoin from 900 each day all the way down to 16.

In my opinion, this shows miners are confident bitcoin’s price will rebound.

When bitcoin surpasses its all-time high of $70,000, their balance sheets will grow at least 1.5 times just from the price appreciation. And when it hits $500,000 – as I believe it will – we could see their prices balloon at least 15 times.

“Buy When There’s Blood in the Streets”

If the bitcoin miners continue to hoard their BTC, their shares will explode in price. I believe some will even rival the mid-size tech giants of today.

In fact, 3–5 years from now, I wouldn’t be surprised to see bitcoin miners make up their own sector of the S&P 500, similar to the energy and utilities sectors today.

Friends, I know it’s hard to be bullish when you see bitcoin miners down 60–80%. But when bitcoin rebounds – and history shows after every pullback, it reaches new highs – so will the miners.

Remember, they’re leveraged to the price of bitcoin. So when bitcoin recovers, it’ll act like a slingshot effect.

I saw a similar scenario in the mid-1990s when tech stocks got crushed. Like today, people thought software companies then were glorified calculator makers.

Long story short: There’s blood in the streets when it comes to crypto miners.

They’re being left for dead right now… but once they revive, they’ll be insanely profitable in the coming years – especially if you get in at these insanely cheap prices.

It has hefty exposure to miners… but also includes companies in the broader blockchain ecosystem. So, the risk is spread a bit.

Once investor sentiment shifts, I believe bitcoin miners can make you a fortune. All my research suggests you will be richly rewarded for your patience.