In 2003, I started recommending Apple to my retail clients. It was a parting gift right before I left to start my own hedge fund.

At the time, the stock had been destroyed. Prices dropped from a high of $36 per share to $12 (pre-split) when I bought it.

In fact, while I was buying Apple, Steve Jobs – the guy who was brought in to rescue the company – was dumping millions of dollars’ worth of stock…

This was a tough time for me… Apple’s price was free-falling… Jobs was dumping stock… and here I was pounding the table to buy.

But I had good reason to be bullish on Apple. The company was experiencing a barrage of good news… And no one was paying attention to it.

In 2003, one of Apple’s most important products was the iPod. And it was a massive hit with Apple users. But only people with an Apple computer could easily use it.

So the addressable market was only about 2% of computer users.

However, I knew the company was working on a version that would be compatible with non-Apple personal computers (PCs). And non-Apple PC users made up the other 98% of the market. It was a no-brainer that Apple would sell millions more iPods.

So why didn’t Wall Street see the big picture I did?

Wall Street had been burned by Apple for years. Shares had literally done nothing since the 1980s. Take a look at the chart below… 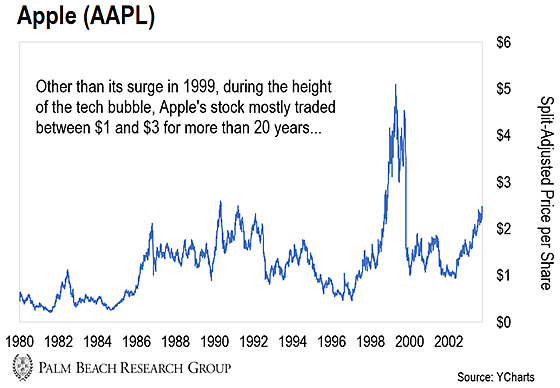 So investors were turned off by the Apple story… Even when the facts started to improve, they didn’t believe them.

It took 18 more agonizing months before Wall Street realized Apple was a bargain with a big story. And then the share price took off.

Like Apple in 2003, there’s a lot of fatigue with bitcoin today. (I’ve written about this before here and here.)

You have long-term holders who’ve just put away their bitcoin and forgotten about it.

And you have range traders buying it at $9,000 and selling at $10,000. This type of trading has kept bitcoin in a sideways pattern, too.

Meanwhile, the rest of the world is focusing on day trading Big Tech stocks like Facebook, Tesla, Google, Netflix, and Apple.

So bitcoin is just kind of sitting there in a corner… forgotten by the world.

But while bitcoin stays range bound, we’re seeing incredibly bullish news just like we saw with Apple in 2003.

This comes on top of reports that PayPal and its Venmo subsidiary plan to roll out direct sales of crypto to its 325 million users.

Days later, the Office of the Comptroller of the Currency issued guidance saying banks can store and work with cryptocurrency. The agency regulates all U.S. banks.

This news is huge for crypto adoption. All of a sudden, every bank in America can safely get into crypto without fear of running afoul of regulators.

Let me put this news in perspective for you…

And the U.S. Banking system touches the lives of over 300 million Americans.

Even with all this great news, most people are completely missing this story because they are fatigued with bitcoin – just like they were with Apple in 2003.

Wake Up and Realize Bitcoin Is Still Cheap

I say that, even though I know bitcoin is the type of asset that can drop 50% tomorrow if some foolish trader gets overleveraged. That’s what we saw happen in March, when bitcoin dropped more than 50%.

But the recovery was swift. Bitcoin was back at $10,000 in less than two months.

So no matter what happens over the short term, I’ll still stand by the statement that bitcoin is cheap right now. In fact, I’ll say it’s more undervalued now than it was two years ago, when it was trading around $3,000.

Why is it more undervalued now?

So much of the uncertainty that came with owning bitcoin back then has been removed… And yet, bitcoin’s price isn’t reflecting the removal of that uncertainty.

That’s why last Wednesday, I filmed a special video for my Palm Beach Confidential subscribers, pounding the table on bitcoin and the broad crypto market. (Paid-up subscribers can watch the video right here.)

Since then, bitcoin has gone from around $9,300 to over $11,000. Our other holdings, like ether (the native token of the Ethereum blockchain), are up even more. Ether is up over 32% since I published my bullish video.

If you’ve been holding back on getting involved in crypto, now’s the time to get back in.

Crypto prices are on the doorstep of exploding higher. And once they do… there’s no bringing them back. The price you pay today could look very cheap three months from now.

Take action today and at least buy some bitcoin. And if you don’t already own it, then take a look at buying some ether, too.

P.S. I’m so convinced about the life-changing gains you can make in crypto, I accepted an invitation to debate one of the world’s most controversial crypto skeptics.

In fact, this famous person once called crypto “crapto.”

I went toe-to-toe with this skeptic for more than an hour in a completely unrehearsed debate. Who is this self-described crypto critic? Did I convince them? Who won?

To find out, click here to watch the world premiere of the great crypto debate…