Nick’s Note: When it comes to trading the market, there are few better than PBRG friend and master trader Jeff Clark. In today’s essay, Jeff explains why buying gold can be a lot like bad gardening. It’s a quirky story that will give you some unique insight on the erratic nature of the gold market…

On the first day of every month this year, Gabriela has brought home an orchid from the neighborhood florist.

Under the florist’s care, the orchid thrived. The flower petals perked. Little buds of future flowers popped up on empty stems. And the leaves stood at attention like the guards outside of Buckingham Palace.

Under my wife’s care, though, all of the orchids have died.

It’s not intentional, of course. Nobody drops $129.99 plus tax on the first day of every month to buy the best-looking plant in the flower shop with the intention of killing it.

But the end result is the same. The plant does okay in our home for the first week. By the end of the second week, it looks a little tired. The leaves start to droop. The flowers shed a petal or two. And the buds stop growing and show no interest in bursting open.

The third week is usually quite somber. Most of the orchid petals have abandoned ship. The leaves are wilted and sagging. And while the florist tells me, “That’s impossible,” it appears to me that the buds have shrunken and have hidden back inside the stems.

By the fourth week, the orchid needs hospice care.

And by the end of the month, I perform the burial services. “You deserved better than this,” I say as I deposit the “stick in a pot” into the green recycling bin.

Gabriela then heads off to the neighborhood florist and tries it again. She knows—with absolute certainty—that the orchids will thrive in our home. “I just have to get the timing right,” she tells me, as she also explains why the credit card bill will be a bit higher this month.

Like the orchids, I just know—with absolute certainty—that gold stocks will have their day in the sun.

Much as my lovely wife started out this year thinking she could finally keep an orchid happy and alive in our home, I started the year thinking gold stocks would rally.

Neither of us has been proven right… yet.

Every month, we start over. My wife has a new plant. And I have new information to justify a gold stock rally.

For my wife… so far this year, she has discovered that too much water is lethal to orchids. A little sunshine—but not direct heat—is good. And orchids don’t like rap music—a discovery that came as a result of leaving June’s sacrificial lamb in my youngest son’s room for three days.

As for gold stocks… I’ve learned that the market takes far longer than it should to recognize the problems of too much debt. The commercial trader positions can reach historic extremes. And normal technical conditions—and the response to those conditions—aren’t necessarily true in the gold sector.

My wife came home yesterday with the most beautiful blue orchid I’ve ever seen. There were three bright blooming flowers and six buds that looked ready to explode open at any moment.

“This is it,” Gabriela said, “I just know this will look so beautiful in our living room for months to come.”

Her history isn’t great. But I know her enthusiasm will pay off someday. And I don’t want to miss it.

P.S. If you liked the story about my wife’s penchant for orchid gardening, then you’ll want to hear the story of how I almost lost my entire life savings on March 2, 2000—and the investment secret that saved me from that catastrophic potential loss.

I’ve used it ever since to help people generate thousands of dollars per month. Click here to get the full story.

Is This Stock Still Untouchable?

Our August 29 essay on “untouchables” stocks was a hit. But several astute readers have asked why food giant General Mills made our list (see Mailbag below).

For a recap, the “untouchables” are a group of stocks that haven’t fallen more than 10% in any calendar year.

At first glance, it looks like readers had a good point… General Mills is down 38% from its July 2016 high. 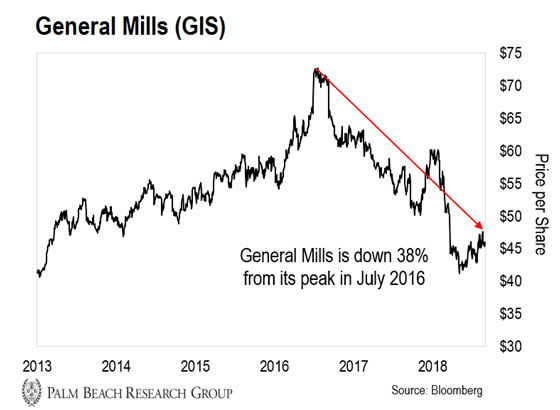 But this wasn’t an oversight. General Mills is still an “untouchable” stock… at least for now.

You see, a calendar year runs from January 1 to December 31. So every year, we reset the count.

If you look at the next chart, you’ll see over the past five-and-a-half years, General Mills hasn’t fallen over 10% in a calendar year—although it’s been in a steady decline since mid-2016. 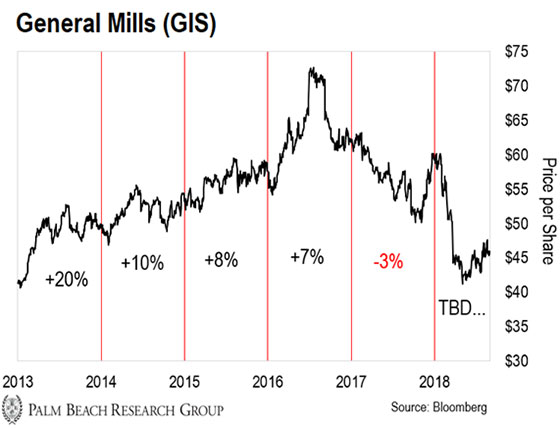 This year, General Mills could lose its status as an “untouchable”… It’s down 25% so far in 2018. It will have to rise above $54 per share before December 31 to remain on the list.

As we mentioned above, readers want more “untouchable” stocks (see August 29 issue, “The No. 1 Rule for Protecting Your Wealth”)…

From Lynn M.: In your recent issue, you asked for feedback about “untouchable” stocks. Yes, yes. I definitely want more of this. I hope you get a lot more feedback from others with the same interest.

From Dan M.: Nick asked about finding more “untouchable” companies. I want to let you know that I would definitely be interested in learning more about this! Thanks so much!

From Michael J.: I would love to see the full list of “untouchable” stocks!

From Pamela T.: Nick, please look into more stocks like the “untouchables.” Thank you for your article.

From Darrel M.: I would definitely like to learn about more “untouchable” companies! I want to add some to balance my portfolio.

From Carolyn K.: I really found your “untouchable” stock essay interesting and would be pleased to see more such suggestions in the future. It’s challenging in this day and age to find “safe” places to invest my small savings in and see some potential for growth.

I wondered why GIS can be classified as one of the “untouchables” since it fell more than 10% in a calendar year.

Nick’s Reply: Thanks for the observations, guys. I explain why GIS is still (for now) on the list of “untouchables” in the Chart Watch above.

From George K.: In response to Nick’s request for feedback on “untouchable” stocks… I believe there would be great interest in producing such a list of investments, particularly for subscribers who’ve been around since the beginning.

In the early days, Palm Beach Research Group was unique in that it focused on wealth creation and preservation as opposed to speculation like most financial publications. Unfortunately, the site has pretty much become the Teeka show.

While cryptos are interesting, I believe the earlier Infinity members would like to see some return to Palm Beach’s roots. I, for one, would welcome a maintained list of “untouchable” companies.

Nick’s Reply: Thanks for the reply, George.

At PBRG, our mission remains the same… We guide you along the path to real, sustained financial prosperity by giving you a comprehensive wealth-building strategy. Our philosophy is a blend of conservative, income-based investments, asset protection, and smart speculation.

Sure, you’ll see us write a lot about cryptos. That’s because many of Teeka’s subscribers have made life-changing gains by investing in this new asset class.

However, we remain committed to sustained wealth-building. As a lifetime subscriber, you have access to Teeka’s flagship Palm Beach Letter newsletter. The portfolio contains performance stocks, reliable fixed income, and chaos hedges like silver and gold.

For example, Teeka’s Stock Market Income portfolio contains some of the safest funds on the market. Those stocks have an average return of 18.15% and an average yield of 6.3%—both of which outperform the broad market.

And Jason Bodner’s Palm Beach Trader portfolio is full of high-quality stocks with an average return of 20.67% in a little over two months.

As you can see, at PBRG, we continue to offer plenty of wealth-building strategies—whether it’s precious metals, cryptocurrencies, or high-quality stocks. As a lifetime Infinity member, you have access to all of these services, as well as a new and exciting wealth-generating product we’ll be launching soon (see below).

On Wednesday, September 12, for the first time in his career, Teeka will share his new “Alpha Edge” strategy—and reveal some of Wall Street’s best-kept money-making secrets on camera.

To make sure you don’t miss out, you can click here to automatically receive updates before the big event.

And as a thank you for taking early action and signing up, we’ll send you three free training videos from Teeka as a bonus. 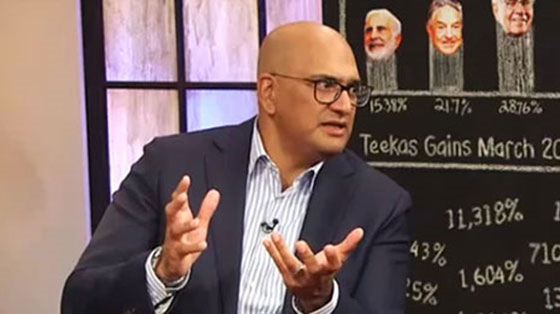