Nick’s Note: If you’ve been following us lately, you know we’ve pointed out the flaws of socialistic policies and how they’d negatively affect the markets. For example, we’ve shown you how proposals to restrict share buybacks and tax high-frequency trading would hurt investors by limiting money-making opportunities.

But we wanted to dig deeper to find out what’s driving this renewed interest in socialism. That’s why we’re turning to longtime PBRG friend and legendary speculator Doug Casey—one of the best public thinkers we know.

Doug founded an independent financial publishing house almost 40 years ago… and has written three best-selling books that lay out his radical economic views. He’s a true pioneer in the field.

In today’s essay, he explains why Americans are moving towards socialism…

Most likely, Alexandria Ocasio-Cortez (AOC) is the future of the Democratic Party—and of the U.S.

She’s cute, vivacious, charming, different, outspoken, and has a plan to Make America Great Again. And she’s shrewd. She realized she could win by ringing doorbells in her district, where voter turnout was very low and about 70% are non-white. There was zero motivation for residents to turn out for the tired, corrupt, old hack of a white man she ran against.

But in fact, it doesn’t seem like she has a very high IQ. I suspect that if she took a standardized IQ test, she’d be someplace in the low end of the normal range. But that’s just conjecture on my part, entirely apart from the fact that a high IQ doesn’t necessarily correlate to success. Besides, there are many kinds of intelligence—athletic, aesthetic, emotional, situational…

A high IQ can actually be a disadvantage in getting elected. Remember, it’s a bell-shaped curve; the “average” person isn’t terribly smart, compounded by the fact half the population has an IQ of less than 100. And they’re suspicious of anyone who’s more than, say, 15 points smarter than they are.

However, there are better ways to define stupid than “a low score on an IQ test” that apply to Alexandria. Stupid is the inability to not just predict the immediate and direct consequences of actions, but especially the indirect and delayed consequences of your actions.

She’s clearly unable to do that. She can predict the direct and immediate consequences of the policies she’s promoting—everybody getting excited about liberating all other people’s wealth that just seems to be sitting around. Power to the People, and Alexandria! But she’s unable to see the indirect and delayed consequences of her policies—which I hope I don’t have to explain to anyone now reading this.

If you promise people unicorns, lollipops, and free everything, they’re going to say, “Gee, I like that. Let’s do it.” She’s clever on about a third-grade level.

But there’s an even better definition of stupid. Namely, “an unwitting tendency to self-destruction.” All the economic ideas that she’s proposing are going to wind up absolutely destroying the country.

It’s as if she thinks that what’s happened recently in Venezuela and Zimbabwe—not to mention Mao’s China, the Soviet Union, and a hundred other places—was a good thing.

That’s my argument for her being stupid… and ignorant as well. But perhaps I’m missing something. After all, Karl Marx was both highly intelligent and extremely knowledgeable; he was actually a polymath. The same can be said of many academics, left-wing economists, and socialist theoreticians.

So perhaps a desire for “socialism” isn’t just an intellectual failing. It’s actually a moral failing.

Socialism is basically about the forceful control of other people’s lives and property.

I’m afraid Alexandria is evil on a basic level. I know that sounds silly. How can that be true of a cute, young girl who says she just wants sunshine and unicorns for everybody? It’s too bad the word “evil” has been so compromised and discredited by the people who use it all the time—Bible-thumpers, hysterics, and religious fanatics. Evil shouldn’t be associated with horned demons and eternal perdition. It just means something destructive or recklessly injurious.

The world would be better off if she went back to waitressing and bartending.

It really helps to be young and good-looking, and to have a nice smile. But there are immense problems in the U.S., at least just under the surface. Wouldn’t it be nice if everybody had a job paying at least $15 per hour, free schooling, housing as a basic human right, free medical, free food, and 100% green energy? I know it doesn’t sound evil—it just sounds stupid. But it’s actually both.

The problem isn’t just that she got elected on this platform in a benighted—but increasingly typical—district. The problem is that most young people in the U.S. have her beliefs and values.

The free market, individualism, personal liberty, personal responsibility, hard work, free speech—the values of Western Civilization—are being washed away everywhere. But it’s hard to defend them because the argument for them is intellectual, economic, and historical. While the mob, the capita censi—the “head count” as the Romans called them—is swayed by emotions. They feel; they don’t think. Arguments are limited to Twitter feeds or 30-second TV sound bites.

When somebody says, for instance, “Why can’t we have free school for everybody? The university buildings are already built. The professors are already there. So why can’t everybody just go to class and learn about gender studies?” The same arguments are made for food, shelter, clothing, entertainment, communication—everything, in fact.

To counter that, you have to come up with specific reasons for why not. You end up sounding like a Negative Nelly because you’re telling people they can’t have something.

I guess I’ve given too much credit to the goodwill and the common sense of the average American. The proof of that is the success of AOC. The psychological aberrations of the average human are being brought to the fore.

Nobody, except for a few libertarians and conservatives, are countering the ideas AOC represents. And they have a very limited audience. The spirit of the new century is overwhelming the values of the past.

Everybody Will Blame Capitalism

When the economy collapses—likely in 2019—everybody will blame capitalism because Trump is somehow incorrectly associated with capitalism. The country—especially the young, the poor, and the non-white—will look to the government to do something. They see the government as a cornucopia, and socialism as a kind and gentle answer. Everyone will be able to drink lattes all day at Starbucks while they play with their iPhones.

The people that will control the government definitely won’t want to be seen as “do-nothings.” Especially while the ship of state is sinking in the Greater Depression. They’ll want to be seen as forward-thinkers and problem-solvers.

So we’re going to see much higher taxes, among other things. There’s no other way to pay for these programs, except sell more debt to the Fed—which they’ll also do, by necessity.

The government is bankrupt. But like all living things—from an amoeba to a person to a corporation—its prime directive is to survive. The only way a bankrupt government can survive is through higher tax revenue and money-printing. Of course, don’t discount a war; these fools actually believe that would stimulate the economy—the way only turning lots of cities into smoking ruins can.

I don’t see any way out of this.

Nick’s Note: Doug has made some controversial predictions over the years, including the downfall of the Soviet Union, the rise of Islamic terrorism, and Donald Trump’s surprise victory in the U.S. presidential election.

Recently, Doug sat down in front of a camera to reveal five new controversial predictions for 2019 and beyond. Fair warning: Some of what he says might be offensive to some people. But if his past record is any indication, you’ll want to hear him out.

We’re calling the event Totally Incorrect: LIVE… and it airs Wednesday, March 27 at 8 p.m. ET. But you can get an exclusive preview right now in this 50-second video clip…

Readers continue to debate the need for “walls” to protect America…

From Laura I.: There are already border walls in other countries, and they’ve proven to be well worth the time and money spent to construct them. No law enforcement procedure stops all crime, but most are cost-effective.

From Robert Z.: Nick, to say, “The wall itself is pointless, though… Anyone wanting to get into the U.S. illegally can still go over, under, or around it,” is so wrong-headed that it makes me question your judgment in general.

From Steve C.: I believe we need to focus equally on a border wall and a virtual wall to protect our technology.

Watch the exclusive trailer for Doug Casey’s new documentary-style video, Totally Incorrect: LIVE… and get your free tickets for the world premiere on Wednesday, March 27 at 8 p.m. ET. 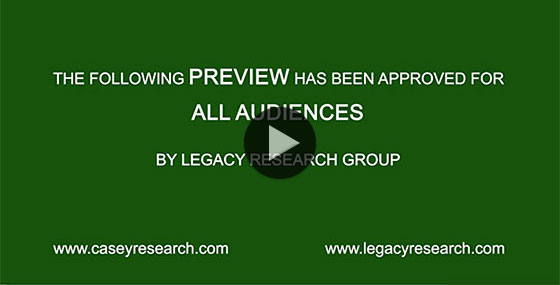