At the turn of the century, Bruce Berkowitz was a rising star in the value investing world. Nearly 20 years later, his star has faded…

In the 1980s and 1990s, Berkowitz worked as a portfolio manager at major Wall Street firms like Merrill Lynch, Lehman Brothers, and Smith Barney.

In 1997, he struck out on his own and founded Fairholme Capital Management. At its height, the hedge fund managed $20 billion.

Berkowitz made those impressive gains by buying cheaply priced stocks. He looked for companies with exceptional management and lots of free cash flow… that were deeply undervalued. (All of which are traits we look for at the Daily, too.)

But things started to go downhill from there…

The demise of Berkowitz’s hedge fund began in 2005… although it didn’t appear so at the time. That’s when he invested heavily in a company that he said was so cheap, he couldn’t “see how we’re going to lose.”

Today, he says that same company “wrecked” his hedge fund.

Regular readers know that we like to follow the smart money… It usually leads to profitable opportunities. But sometimes, smart money can be dumb. So learning from its mistakes can be just as enlightening.

Don’t Fall Into This Trap

At the Daily, we’re always hunting for money-making opportunities. These profitable ideas can help you pad your nest egg and achieve a dignified retirement.

But unprofitable ideas can completely wreck your portfolio… just like once-venerable retailer Sears did to Berkowitz’s hedge fund, which is now closed.

When Berkowitz initially began buying shares of Sears in 2005, the company looked like a value. Instead, it was a value trap.

A value trap is a company that appears cheap because of a large price drop in its shares—but is actually expensive compared to future growth.

Berkowitz bought Sears for two reasons: He believed investing wunderkind and Sears’ biggest shareholder Eddie Lampert would turn the company around… And he thought shares were cheap.

Here’s what he said at the time…

The value of all the pieces, in death, is worth more than the current market price. And if Eddie Lampert turns around Sears and Kmart, then it’s going to be worth considerably more. In another area, if the stock price goes down, the company continues to buy back stock, great, we win. If the stock price just goes up, we win… This is a good example of how we invert the investment process. I can’t see how we’re going to lose.

Unfortunately for Berkowitz, he was wrong… on both counts.

First, Sears has been in a death spiral under Lampert’s failed leadership.

Shares are down 99% since Lampert took over as CEO in 2013. It was only a matter of time before the company declared bankruptcy.

And the company wasn’t as cheap as Berkowitz originally thought…

Sure, Sears did look cheap in 2005. Shares traded at a price-to-earnings (P/E) ratio of 7. That was less than half that of the broad market at the time. (The P/E ratio shows how much you’re paying for one $1 of current profits.)

Sears also looked cheap based on its price-to-book (P/B) ratio of 0.7. That suggested the company’s assets were trading at 70 cents on the dollar.

Numbers like these are a value investor’s dream. But despite plummeting share prices, the company is actually expensive.

You see, investors just can’t consider an asset’s current price… They must also think about what that asset will be worth in the future, too. In Berkowitz’s case, Sears was a dying retailer with deteriorating assets.

And it became very expensive… 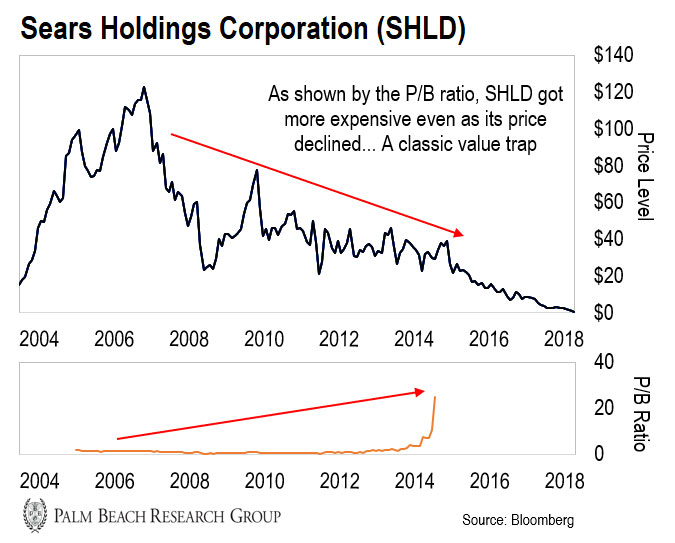 Sears was such a disaster that Berkowitz had to close Fairholme in 2017. By that time, the fund had $2.2 billion under management—down 90% from 2010, when he was named manager of the decade.

And Sears isn’t alone. Here’s a list of a few other potential value traps:

I would avoid these stocks until they can prove they can increase revenue… and prove to everyone that they’re no longer potential value traps.

How to Escape Value Traps

If you do fall into a value trap—and suffer major losses like Berkowitz did—take these three simple steps:

Before every investment you make, you should have a plan. Part of that plan is to figure out when to exit the position. A stop loss makes it easy.

If Berkowitz had used this strategy with Sears, he probably would’ve saved his hedge fund. If you don’t want value traps to potentially wreck your portfolio, you should use it as well.

P.S. If you’re looking for value plays, consider “rolling” your capital into the healthcare and tobacco sectors.

As PBRG guru Teeka Tiwari said in Monday’s interview, healthcare is growing faster than the market and is incredibly cheap compared to its historical valuation. And tobacco companies gush cash and pay fat dividends—almost twice that of the 10-year Treasury bond.

If you own a single ounce of gold, you need to see this message before the market opens tomorrow.

Multimillionaire gold speculator Doug Casey says, “This is the one investment you need to hold in addition to physical gold.”

This should be mandatory viewing for any Daily reader… 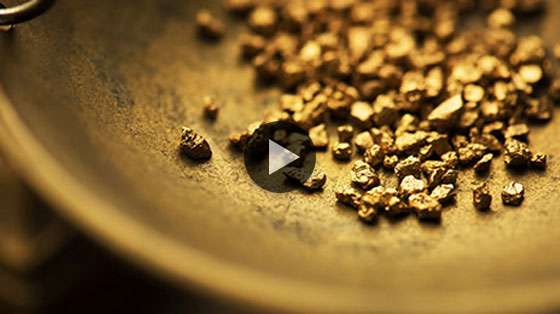