Nick’s Note: There is an important question about retirement that Americans get wrong more than any other. My PBRG colleague Greg Wilson says knowing the answer can be the difference between a dignified retirement and struggling to make ends meet in your golden years…

Like many Americans, Linda McCord is struggling in retirement.

Her latest problem is life insurance premiums. Two years ago, she paid roughly $600 per year. Now, it’s about $2,000.

“I just want to scream bloody murder. It is hurting so bad,” said Linda.

Tom Seymour is feeling the pinch, too. Seventy years old and retired, he makes spare cash by driving for Uber and Lyft.

But rising gas prices are cutting into his profits. After tallying up his income and expenses, he found he’s only making $5 to $6 per hour.

And then there’s Rosanne Goodwin, retired and living in San Diego.

She was diagnosed with brain cancer a few years back. Those health problems depleted her savings. And with rising medical bills, her Social Security benefits no longer cover her monthly expenses.

She’s selling whatever she can on eBay to make ends meet.

Prices are rising due to inflation. And that’s a threat to your retirement.

Rising inflation can quietly rob you of your buying power, leaving you short when you need it most. Regular readers will recognize this as part of our Income Extermination thesis.

Today, I’ll show you where to invest your retirement nest egg to protect it from this growing threat.

Can You Answer This Question?

Inflation is an important concept to understand. Yet not everyone does.

If the interest rate on your savings account is 1% per year, and inflation is 2% per year, after one year, how much would you be able to buy with the account?

Participants performed the worst on this inflation question: 23% of those surveyed got it wrong. (The correct answer is “less than today.”)

That’s alarming because inflation can have a profound impact on your retirement.

Inflation is when the general level of prices for goods and services increases.

The downside is loss of purchasing power—meaning one dollar in the future won’t be able to purchase the same amount as one dollar today.

That’s a concern for retirees, who are often on fixed incomes. If your money won’t go as far as it used to, your only choice may be to reduce your standard of living.

And that may be in the cards for a lot of retirees.

According to The Wall Street Journal, Americans are reaching retirement in bad financial shape.

More than 40% of households headed by people aged 55 to 70 don’t have the resources to maintain their living standards in retirement.

And all signs point to a continued rise in inflation.

Inflation Hasn’t Been This High Since 2012

Healthcare costs continue to rise. The annual cost of healthcare for an American family of four hit $28,166—up 4.5% from a year ago.

There’s plenty of smaller examples, too. For example, Amazon recently raised its Prime membership by 20%. And Smucker’s raised the price of its Jif peanut butter and other items by 6%.

And now we have to worry about the impact of trades wars. Everything from bourbon to grapes to blue jeans could go up in price.

So it’s no surprise the U.S. Labor Department announced that inflation is at a six-year high. 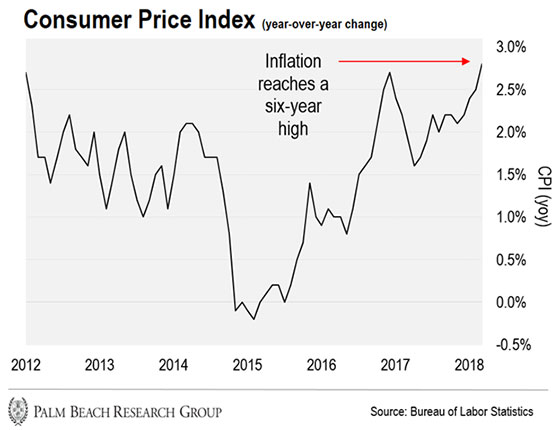 At the Palm Beach Research Group, we’ve been watching all this unfold closely.

Our goal is to protect our readers from rising inflation and Income Extermination… and recommend ways to profit at the same time.

So what are the best ways to do that?

Income Extermination is the combination of rising rates and rising inflation (see PBL editor Teeka Tiwari’s interview in the March 5 Daily for more).

First, the one investment you want to avoid is long-term bonds.

The last time we saw this lethal combination of rising rates and inflation was in 1981. The bond market fell 19% that year.

The next step is to identify the right income investments.

You want investments in which real capital appreciation will exceed inflation. That way, you maintain your purchasing power.

We’ve been doing that with closed-end funds (CEFs). CEFs are an investment structure with shares traded on the open market.

They’re similar to exchange-traded funds (ETFs)… But there’s one main difference: CEFs do not issue shares daily. That means CEFs can trade on the market at prices different from the value of their assets, called the net asset value (NAV).

When a CEF trades for less than its NAV, you can buy it at a discount. This means you could buy $1 worth of assets for just 90 cents.

If you want to avoid the threat of Income Extermination, remove dangerous long-term bonds from your portfolio… and add safer options like quality CEFs.

P.S. Were you able to correctly answer the question in today’s essay? Tell us what your answer was right here…

Nick’s Note: Each morning, Palm Beach Trader editor Jason Bodner runs his proprietary system and pulls more than 120 data points on over 4,000 U.S. stocks. But only a handful trigger his buy signal. Today, his system is signaling a sector that I’ve predicted will rise if the trade war de-escalates…

My unusual buying indicator is zeroing in on the industrials sector. I expect it to have an underlying bid in the coming months as a number of stocks show accumulation signals.

Trade wars and tariffs have been the talk of the media. However, those dreary headlines aren’t in sync with my data. I’m seeing an appetite for industrials, which you can see via the Industrial Select Sector SPDR ETF (XLI) in the chart below. 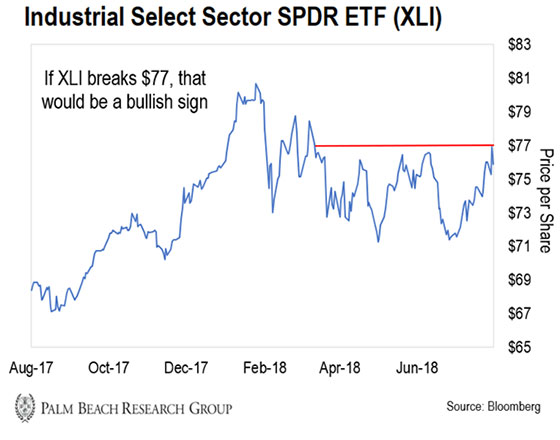 The $77 level in XLI is on my radar and I expect we should pierce it soon.

As I look at what transpired last week from a data standpoint, 22% of all unusual buy signals came from industrials. This is important because the last two times the sector tried to rally (May 21 and June 11), it failed. That’s likely due to lack of large buying.

When I see a potential breakout in a sector accompanied by big buying—I take notice.

Keep the $77 level in XLI on your radar. Any positive headlines could send this sector a lot higher from here.

From Wes G.: In your essay on the 35 minerals critical to national security, you listed graphite with metals. Graphite is not a metal. It is another form of carbon, as is a diamond.

Nick’s Reply: You make a good point, Wes. Graphite is a soft, crystalline form of carbon. But it exists in a kind of grey area. According to the U.S. Geological Survey, it has both metallic and non-metallic properties.

President Trump has mobilized his entire administration to battle this problem by declaring it a National Emergency. And Congress just approved $6 billion to fight it.

Could this new company be the next to ride this unique wave? 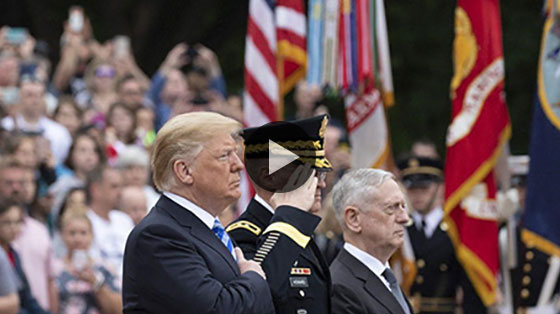