They call him the Gandalf of Wall Street…

For those who don’t know, Gandalf is the wizard from the Lord of the Rings series whose predictions often turn out right… just like Marko Kolanovic’s do.

Kolanovic is one of the most-respected market forecasters out there.

He came to prominence after forecasting the August 2015 flash crash. He was only a couple days away from calling the September bottom. And then he called the top in October before the market pulled back over 12%.

Predictions like those helped make Kolanovic one of JPMorgan’s top strategists.

Here’s why I’m telling you about Kolanovic…

Last week, he made his latest prediction. He told Barron’s that—despite the recent 7%-plus drop in the S&P 500—the market would rebound off strong earnings.

“The market will recover,” he said. “We are less than two weeks from what we think will be the strongest earnings season in recent history.”

This is a bold prediction…

You see, when earnings go up, stock prices typically follow. And we’re about to see the strongest earnings season in the past 20-plus years.

If you’re nearing retirement or just starting to put together your retirement plan, here’s why you should follow Kolanovic and add some equities to your portfolio…

In January, I told you Wall Street liked to play a shady “bait-and-switch” game with investors.

The game allows for analysts to make higher valuations in the present… but then gives companies an easier target to “beat” their earnings estimates later on.

It works like this: Analysts start the year with a relatively high earnings estimate. But as the year progresses, they slowly lower it.

The adjusted earnings allow companies to clear a lower hurdle.

This “bait-and-switch” game makes it easier for companies to beat expectations… and for their stock prices to pop after earnings are announced.

And it happens a lot… especially when earnings growth isn’t very strong.

But this isn’t happening right now…

Today, earnings are growing faster than analysts have predicted. Instead of revising estimates downward, they’re revising them upward.

This rarely happens, and never to the extent we’re seeing today.

The chart below shows changes in the earnings per share (EPS) estimates in the first quarter of the year over the past 20 years.

As you can see, analysts have revised EPS estimates upwards only four other times before 2018. 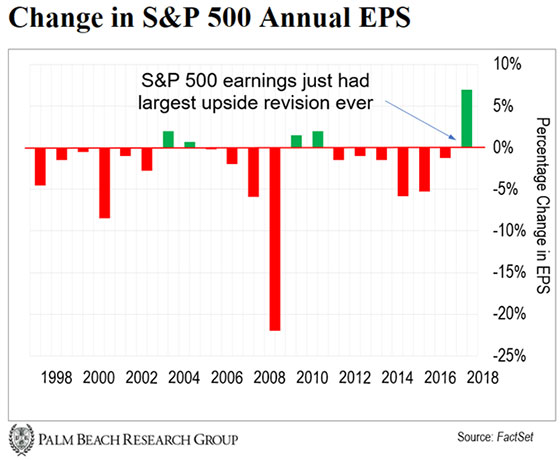 Analysts haven’t revised earnings upwards since 2010 and 2011. Those were pretty good years for the S&P 500, too. The index shot up 12% over that span (despite a 19% drawdown in the middle because of Greek debt contagion fears).

Those numbers are far from exciting… But they are signs the market should continue upward.

Typically, the market follows earnings. That’s why people like Kolanovic aren’t worried about the recent dip.

Now, I know the market is volatile. But a lot of the pain is coming from news that doesn’t impact profits (see yesterday’s Daily).

The economy is still strong. Businesses are thriving. And earnings will trump all other news. You’ll want to own equities going into this earnings season.

From Robert H.: Wish I’d seen this five years ago… One thing I did a bit differently (because I didn’t know any better) was send coins directly to an exchange where I could trade for other coins. I didn’t know how to do this at first.

From Tom A.: I found it very easy to listen to. And I like that I can go back over it should I wish to do so.

From Rod D.: Cryptos can be kind of scary for old-schoolers. And this course greatly simplified the process of investing in them.

From Peter F.: The course is very informative.

Would you rather have this million bucks or the new “K Sign” indicator? 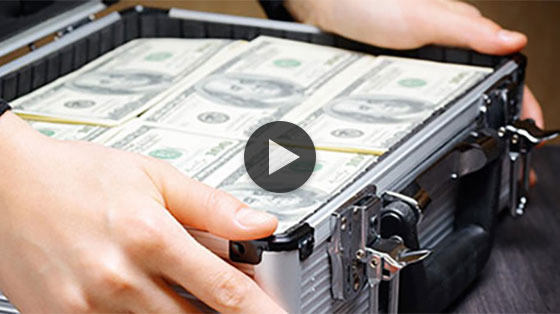 Before you decide, you ought to know that extensive data-testing proved how this new indicator can predict stock market wins 365 days in advance, with 93.5% accuracy.