The last time uranium started a bull run, it went up 580% in two years…

Last week, we told you that uranium looks to be awakening from a six-year bear market slumber…

We based our conclusions on the “rubber band effect.” The effect basically states that if you stretch an asset too far in one direction, the revert to the mean will be quick.

Just on the snap-back effect alone, we think uranium prices could quadruple over the next three years.

And the timing couldn’t be better…

That’s because the snap-back effect is coinciding with another force. And these twin forces could ignite a uranium bull run that investing legends are made of…

How Prices Are Determined

The second force we’re talking about affects all commodities. It’s the rule of supply and demand.

Prices can go up if one of two things happen: demand increases or supply decreases.

It’s as simple as that.

What’s not so simple is predicting future supply and demand. But sometimes, there are enough clues laying around to help solve the mystery.

And prices can really skyrocket if demand increases when supply decreases.

Right now, we see enough clues to make us think uranium is about to go higher… as much as 427% higher.

Japan is working to restart the 25 reactors it shut down after a tsunami caused a meltdown at its Fukushima nuclear power plant in 2011.

And China expects to complete 20 new reactors over the next four years.

These two countries alone will substantially increase demand. That doesn’t even count the 30 nuclear plants other countries are building.

Cameco is the world’s largest uranium company. It predicts global demand for uranium will grow from 160 million pounds today to 220 million pounds in 2025. That’s a 38% increase in demand.

But while demand is rising, supply is falling…

Supply Is Drying Up

Rising demand increases commodity prices. But, like we said, if that increased demand coincides with decreased supply, prices really skyrocket.

And uranium supply is getting scarcer by the year.

Today, the world mines 158 million pounds of uranium per year. So there’s already less supply than the current global demand of 160 million pounds.

And we’ll continue to see supply shrink even more.

Right now, uranium sells for $22 per pound. According to Uranium Energy Corp., the average cost of production for uranium is $40 per pound. Even the cost to produce uranium for low-cost miners is around $25 per pound.

That means miners are losing money on uranium.

Kazakhstan is the world’s largest producer of uranium. The country has some of the lowest-cost mines in the world. Despite its cost advantage, Kazakhstan will cut production by 10% this year.

The price needs to go a lot higher before miners will even think about new projects. And increased demand will send prices higher (see table below)… 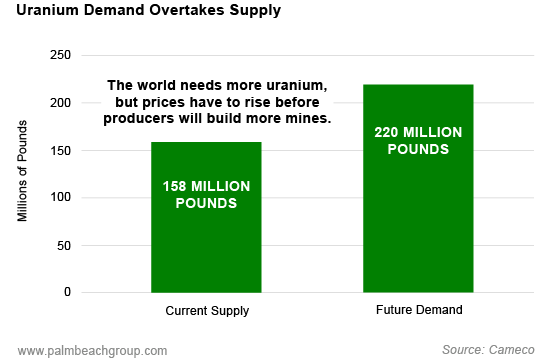 Meanwhile, another huge source of uranium is leaving the market.

About 15% of last year’s uranium supply came from decommissioned nuclear bombs. The United States and Russia sold the uranium from these bombs on the market.

But it appears both countries are done decommissioning their nukes. So another source of the metal is off the market.

Supply is shrinking and demand is growing… And the growing imbalance signals higher prices.

The growing supply-demand imbalance is another sign that uranium is primed to gun up.

Uranium isn’t the only metal on the ascent…

Palladium is the best-performing precious metal so far in 2017… And it’s up over 50% this past year.

As you can see in the chart below, palladium has risen slowly and steadily inside its trend channel. 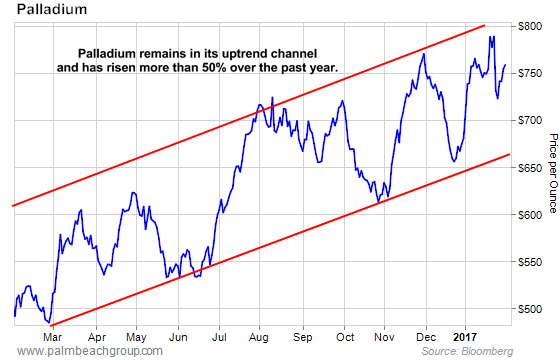 As long as palladium stays in this channel, look for higher prices… It’s further proof that commodities are in a bull market.

Inflation Is Back… Here’s How to Hedge Against It

Last month, PBL editor Teeka “Big T” Tiwari warned you that we’d see the return of normalized inflation in 2017. Now, Big T says a recent 0.5% rise in labor costs during the fourth quarter of 2016 is spurring inflation. As wages increase, so will prices.

Let’s Take This Fight Online: Yesterday, we told you that Amazon was knocking out traditional brick-and-mortar retailers. It looks like heavyweight Walmart isn’t ready to give up its crown without a fight, though… Walmart announced Tuesday that it will offer free two-day shipping on 2 million items for purchases of $35 or more. It’s a direct shot at Amazon’s Prime service, which offers free two-day shipping service for a $99 annual membership. No matter how this fight turns out, consumers will likely be the winner.

Who’s Watching You Online?: Last year was a record for hackers. According to Risk Based Security, more than 4 billion data records were stolen in 2016. That’s because companies make it too easy. They use centralized databases. These databases have become large “honeypots” of information for hackers. Our PBRG team says one solution is storing data on a blockchain. Blockchains are distributed so data isn’t centralized in one place. And they’re secured by cryptography.

How to Score Team Trump: Here’s a simple formula: W = rv (w-w – w-l). That is, wealth is equal to the real value of win-win exchanges minus the loss from win-lose exchanges. If you want to know if President Trump’s policies are improving the U.S. economy, longtime PBRG friend Bill Bonner says to just apply this easy formula. And Bill will show you how to use it…

What type of scorecard are you using to measure the success or failure of President Trump? Send it to us right here.

One small, publicly traded small-cap owns the rights to this massive deposit. And when this news reaches the mainstream by April 2017, share prices could go parabolic. Get all the details right here…