Nick’s Note: At the Daily, we don’t debate politics. We’re about making money in the markets. But that doesn’t mean we ignore politics when they present profitable opportunities.

Just last week, I told you about several companies that would benefit from President Trump’s new tax law. (Be on the lookout next week for my list of winners from his infrastructure policy plan.)

We prefer to find safe companies that will benefit from these policies. But there are ways to speculate on them, too… That’s why today we turn to my colleague, Casey Daily Dispatch editor Justin Spittler, one of the smartest speculators we know…

This is Donald Trump’s message to the oil industry.

And oil executives couldn’t be happier.

That’s because Barack Obama put in all sorts of regulatory red tape during his presidency.

He prevented oil companies from drilling on federal lands. And he banned oil and gas drilling in much of the Atlantic and Arctic Oceans.

All this red tape made it hard for oil companies to make money. It handicapped the industry.

He wants to remove these “unnecessary regulatory burdens” so America can become “energy dominant” again.

And unlike some of his campaign pledges, Trump’s following through on this.

He wants to slash regulations on offshore oil drilling. He’s already given oil companies the green light to drill in the Gulf of Mexico again. U.S. oil companies have been limited in how much they can do that since the 2010 Deepwater Horizon Disaster.

Just last week, he proposed opening up nearly all U.S. coastal waters to offshore drilling. And many experts think he could soon lift a 40-year ban on oil exploration in the Arctic Circle.

This is obviously great news for U.S. oil and gas companies. But not everyone is happy about what Trump’s doing.

Environmental groups, for one, are concerned about oil spills and the damage they could cause to sensitive environments.

You might not agree with them. But I didn’t write this essay to argue whether Trump’s policies are right or wrong.

That’s not my job. My job is to help you make money.

And these policies are extremely bullish for U.S. oil and gas companies.

In June, I showed you that energy stocks were close to bottoming.

Three months later, I showed you how energy stocks had broken out. I explained why this was the buy signal I was waiting on. And I encouraged you to buy beaten-down energy stocks.

Since then, we’ve seen explosive rallies in energy stocks. Just look at this chart of the Energy Select Sector SPDR ETF (XLE). This fund invests in 32 major U.S. energy companies. 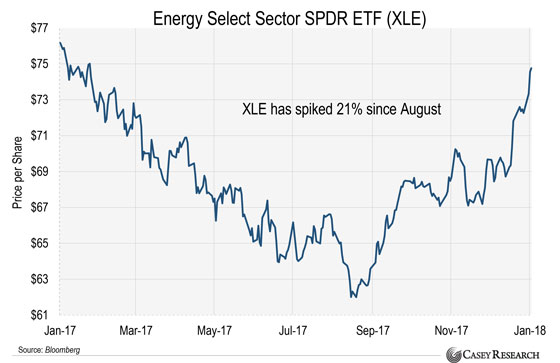 It’s up 21% since bottoming out in August.

Now look at this chart of the SPDR S&P Oil & Gas Exploration & Production ETF (XOP), which invests in 68 oil and gas producers. 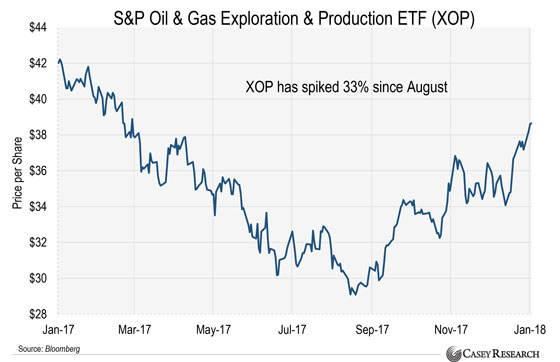 These are big moves. And these funds should head much higher in the months ahead.

But you could make even more money buying the most hated energy stocks out there.

They don’t pump oil or suck gas out of the ground. Instead, they sell machinery and equipment to companies that do. They also help transport rigs for oil producers.

This makes them very sensitive to the price of oil.

But the oil price hasn’t been falling lately. Instead, it’s up 31% since August. It’s now trading at the highest price since May 2015.

That’s why we’ve seen such huge moves in XLE and XOP.

Just look at the chart below.

It compares the VanEck Vectors Oil Services ETF (OIH) with the price of oil. OIH is a fund that invests in 25 oil services companies. 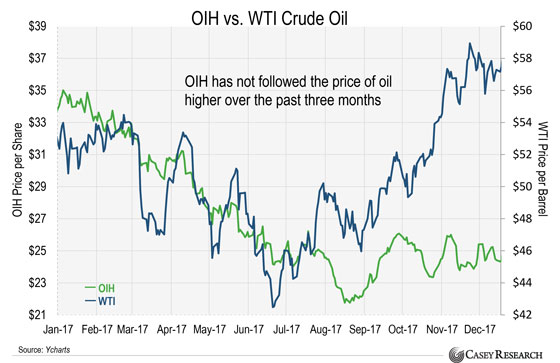 OIH normally closely tracks the price of oil. But this relationship broke down earlier this year.

The price of oil took off, while OIH kept falling.

This isn’t supposed to happen. That’s why I told readers to consider speculating on oil services stocks in November. As I explained, it was only a matter of time before the market corrected this anomaly.

Again, that’s a big move. But oil services stocks should head much higher from here for a couple reasons.

Number one, they are the biggest beneficiaries from Trump’s pro-energy policies.

Think about it. If Trump peels back regulatory red tape, oil companies are going to drill more holes and pump more oil.

But that’s not the only reason I’m extremely bullish on this industry.

But don’t just take my word for it.

According to research firm FactSet, Wall Street expects to see a 165% jump in annual profits for oil services companies when fourth-quarter results come in.

When that happens, we’ll see a stampede in oil services stocks.

You obviously want to be ready before that happens. So, consider investing in oil services stocks if you haven’t already.

The easiest way to do this is with OIH.

Just don’t wait too long to act. Oil services stocks are already off to a red-hot start this year…

P.S. Now is a good time to speculate in oil services stocks. But another industry is growing even faster: legal marijuana.

During the first marijuana boom, after Colorado and Washington legalized recreational pot, the best pot stocks rose as much as 24,000%… With weed now legal in California, I expect the 2018 marijuana boom to be eight times bigger than the first wave.

That’s why I put together this special presentation. If you want to learn how to turn a few hundred dollars into a million or more in marijuana stocks… click here to watch the free event.

From your section on position sizing:

Nick’s Reply: Thanks for the eagle-eyed catch, Wolfgang… We’ve corrected those numbers.

Our Asset Allocation guide is a must-read for every PBL subscriber. It will help you create a well-constructed, safe investment portfolio that passively funds your retirement lifestyle. That’s why we put hundreds of man-hours into developing it.

If you’re a subscriber, click here to read the guide. (You can also download a copy for your convenience.)

It’s an investment method that a former corporate banking insider spent three years and $138,545 developing. And he’s putting his reputation on the line to prove it to you. 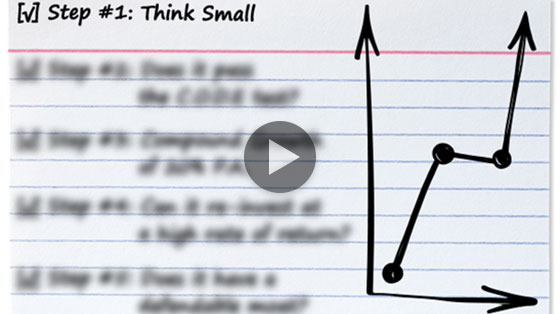