Nick’s Note: Last year was the worst for U.S. stocks in a decade. So what does 2019 have in store? That’s why I called Wall Street insider and Palm Beach Trader editor Jason Bodner.

Today, Jason tells me why he remains bullish on U.S. equities despite all the recent volatility—and which sector he thinks will catch a bid in 2019…

In a moment, I want to get your favorite way to play the current volatility. But first, what’s your prediction for 2019?

Jason: I’ve never been one for making bold, crazy predictions. But I feel confident we’ll see a good year in stocks. However, it won’t be a good year for all stocks.

I think we’re going to see more of a stock picker’s market.

As I told you before, I believe we’re heading into a more selective bull market.

In this phase, you have to know what you’re doing. You have to pick strong companies and know how to separate the wheat from the chaff.

In a selective bull market, we’ll see rallies in individual stocks. Companies with superior fundamentals, earnings, and sales growth will reveal themselves when the market is less bullish.

Overall market gains will be less aggressive, but equities as a whole will go higher.

Nick: There’s plenty of potential bad news out there for 2019, though: trade war fears, political uncertainty, and rising interest rates…

None of it worries you?

Jason: There’s always something to worry about. And the media is very good at letting you know what the negative stories are.

But where else are you going to put your money?

Let’s think this through…

Bonds still have historically low yields. And after taxes, they’re yielding less than the S&P 500. So why not buy stocks, get a better yield, and then get the potential upside from the equity?

And foreign economies are a disaster…

Look at the United Kingdom. People are scared there. Last month, Prime Minister Theresa May postponed the Brexit vote because of strong opposition. If she loses the vote this month, she could be ousted. So there’s a lot of political uncertainty there.

Germany and Italy are already in recessions. And those are really the only investable economies in Europe. In fact, the Stoxx Europe 600—which tracks 600 stocks in 17 European countries—plummeted 13% last year.

And China has its own host of problems. It really can’t afford a trade war. That’ll devastate its economy. On top of that, the country has mountains of debt. It’s a precarious situation there.

Latin America is looking rough, too. Energy prices alone are hampering its economies. And emerging stocks are doing even worse than Europe. The MSCI Emerging Markets Index is down 16%.

U.S. equities are really the only places to put large sums of money to work.

Nick: So you’re saying the U.S. is the best of the worst?

Jason: The U.S. isn’t really that bad. I think people are worried over nothing.

Some people are concerned about rising interest rates. Well, rates are still historically low. And not only are they historically low, but markets are starting to price in little likelihood of a rate rise in 2019.

Others are worried about the yield curve inverting—when short-term interest rates go higher than long-term rates.

So far, it’s just the 3-year rate going higher than the 5-year rate. That has had no predictive power at all. Plus, even after the yield curve inverts, bull markets typically last another year and a half.

Other people are worried about tariffs and trade wars. But I just don’t think it’s going to be that big of a story for the U.S. in 2019.

The U.S. economy is strong. Unemployment is low, consumer confidence is high, wages are growing, and profits and sales are still increasing.

Nick: I’ve heard people say that kind of optimistic talk reminds them of 2007. We had a strong economy then, but the market crashed soon after.

Jason: The 2007 parallel is grasping at straws. It’s not a realistic comparison.

In 2007, you had crazy debt leverage in the U.S. People were packaging products like mortgage-backed securities knowing there was a high likelihood of default. The subprime mortgages were just waiting to go down in flames.

The rate of corporate earnings and sales growth were lower in 2007 compared to now, too. And tax rates were higher back then.

Everyone could see a catalyst for the market going down in 2007.

No one is talking about the biggest financial institutions having exposure to limitless debt or how we should bail them out. We have no catalyst like that now.

Now, I do want to add a caveat…

Just because I don’t see a catalyst for a market crash doesn’t mean human emotion can’t go off the rails. The market can go lower just because people are scared. I can’t say for sure that people won’t throw the baby out with the bathwater.

Nick: You’re right… It’s hard to control for human emotion. So how do you gauge market sentiment?

Jason: Honestly, the only indicator I follow is my proprietary unusual institutional investing system.

It doesn’t specifically have any investor sentiment gauges built into it. But it does track what large institutions are doing. And I’ve seen studies showing institutions control over 70% of the buying and selling in the market.

You can also say that technical analysis—the study of price action—shows sentiment as well. Things like moving averages, the relative strength index, and the average directional index have an impact on market participants.

I track those things because other people track them… It impacts their buying and selling decisions.

While I don’t specifically look at any metric out there, it’s built into my system and what I look at in the market.

So even though it’s only one thing, it’s the most robust indicator I’ve seen… That’s why I built it. I wanted something more robust than a single data point or two that a lot of investors look at.

As far as I know, there’s nothing else out there like it…

Nick: I agree. I’ve researched probably thousands of indicators. None of them have as many inputs as yours.

Since you’re looking at all these stocks every day… what stocks do you think will have the best 2019?

Jason: Like I said earlier, it’s going to be a stock picker’s market. So we have to be selective. I think we’ll see a return to quality companies.

One group I think will do well as a whole will be dividend growth stocks. I think they’re going to catch a bid this year.

As a whole, the S&P 500 is yielding about the same or more as the 10-year Treasury, after taxes. But dividends are taxed at a lower rate than interest payments. So I think yield-starved investors will go to these stocks for income.

Nick: Thanks for taking the time to chat today. Take care.

Jason: As always, my pleasure.

Nick’s Note: Not long ago, Jason asked some “brainiacs” from the financial engineering departments at Cornell University to poke holes in his new system. They couldn’t do it.

His private trading system has historically identified exceptional, life-changing gains as high as 2,983%. That would turn every $1,000 invested into more than $29,000.

Now, gains like this are high and not to be expected, but the power of this trading strategy is undeniable.

Jason’s system can smoke out suspicious activity days before Wall Street has a chance to catch on. That’s exactly when you should be getting in.

Apple’s Woes Drag Down the Market

On Thursday, we said to expect continued volatility—and that’s exactly what the market gave us.

After hours on Wednesday, Apple announced it wouldn’t meet its revenue estimates for 2018. It’s the first time in 16 years that the company forewarned a revenue shortfall…

This shouldn’t be a surprise to regular readers. On November 19, we said we’d avoid the company.

Apple shares sank 10% during Thursday’s trading. But more importantly, Apple took the whole market down with it.

The Nasdaq 100—which tracks mostly large tech companies—was off 3% on the day.

As you can see in the chart below, the Nasdaq 100 is still above its recent low on December 24, 2018. That low will be an important support level if the market is to turn back higher. 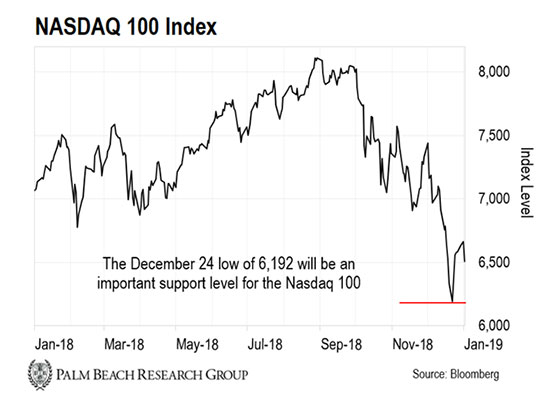 Personally, I think this is an Apple-only problem… and not a signal of a weak economy.

As I said in my November 19 write-up, the new iPhones just aren’t that great. Apple needs to drastically improve its technology for people to drop $1,000 on a new phone.

So I’m using yesterday’s pullback to put on a couple more trades to the long side.

From Nicole W.: Doug Casey’s essay on “the Single Wisest Thing You Can Do With Your Money” was very informative. Please keep it up.

From John C.: What a great gift this essay is… Thank you!

From Mark T.: I really enjoyed Doug Casey’s essay on building wealth (“Doug Casey on Money: How to Get It and Keep It”), especially this line: “Third, don’t give your money to charity. Entirely apart from showing a lack of both imagination and foresight, it’s a complete waste.”

Oh, this is fun! Bound to frustrate some… but a breath of fresh air. There’s a lot of false goodness around.

Do you have questions or comments for our editors? Send them right here…