Evan Spiegel made $1 billion this year… And then lost it in less than three months.

Spiegel is the founder and CEO of Snap (SNAP). Snap is the latest hot pick in a wave of social media companies to go public.

Snap owns the popular app Snapchat. The app allows people to send pictures or videos to their friends… and delete the messages within seconds after they’re sent.

It’s one of the most hyped initial public offerings (IPOs) of 2017. In fact, shares were so in-demand that investors wanted to buy $6.8 billion more than what was initially offered.

As part of the IPO, Spiegel received a “CEO award.” That award was equivalent to 3% of the company shares after the IPO.

At their peak, his award shares were worth over $1 billion. And Spiegel—who is 26—had over $5.5 billion worth of total Snap shares.

However, shares started to trickle lower… And on May 11, they tumbled 20% on a terrible earnings report.

Snap lost $2.2 billion in its first quarter as a public company. If that’s not the worst-ever first quarter for a company, it’s very close. And the value of Spiegel’s 3% award shares evaporated. Investors in Snap likely took a bath, too.

Here’s why we’re telling you about Snap…

Jumping in on a hot tech trend like social media can be exciting… and profitable. But Snap shows some tech companies are fraught with danger.

Don’t Fall for the Fads

We’re always on the lookout for ideas that can make you richer every day. (For instance, we’ve snagged some 10-baggers on the cryptocurrency trend.)

Social media uses technology (like mobile devices, smartphones, and computers) to create interactive platforms that connect people. Individuals and groups use social media to communicate, share videos and pictures, and play games, among other things.

Some of the most popular social media platforms are Facebook and Google. Facebook alone says it has over 1 billion registered users.

But when you play a trend, you have to be careful of which companies you buy. For every social media success like Facebook, there are dozens of misses.

You can spot these tech misses when a company hasn’t found a way to make money off its underlying technology. And right now, Snapchat isn’t making money off its social media platform.

The company lost over $200 million on continuing operations this past quarter. That’s $50 million more than it made in total sales.

You read that right… Snap lost more money than it made in revenues.

(To be fair, $2 billion of its total losses was a one-time charge to compensate employees with stock grants. It won’t be that high going forward.)

So there’s no wonder the company went public… It needed cash to pay the bills.

Sometimes, startups need to spend cash to grow. Eventually, they grow their way out of their losses. And that’s okay. As long as the company is growing.

But Snap isn’t growing. Revenue was down 10% from the previous quarter. And user growth has slowed, too. 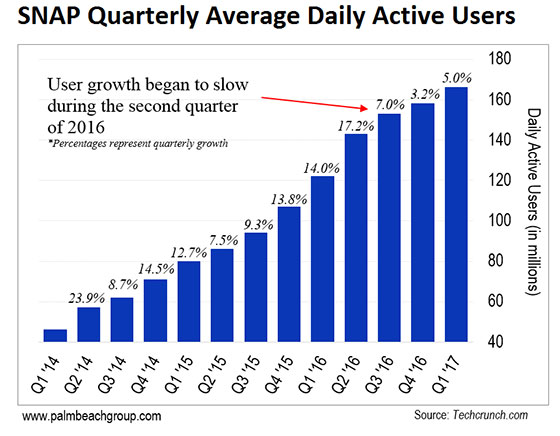 And Snap is having trouble monetizing the new users it is attracting.

Forty-five percent of Snapchat users are between ages 18 and 24. This is a difficult demographic to crack because people in this age group don’t spend much money.

So advertisers don’t want to spend as much on ads to those people. And advertising dollars are the lifeblood of social media.

We’ve seen this story before with Twitter (TWTR), another social media company that went public in 2013. 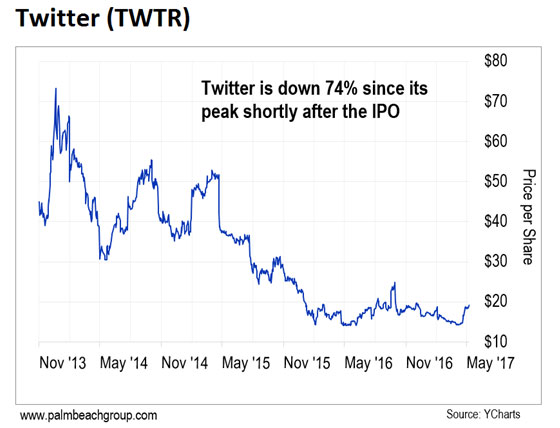 Trying to Pick an Absolute Winner Is Risky

Snap is following in Twitter’s footsteps. It’s still years away from becoming profitable. And it may never be a good investment.

If you want to play the social media trend, stay away from companies that rely strictly on the underlying technology.

There are hundreds of small social media startups waiting to go public. Trying to pick the next Facebook among them is a risky game you don’t want to play.

Bitcoin Demand Is Growing: A proposed bitcoin fund has announced that it will double its IPO size from $500 million to $1 billion. The Bitcoin Investment Trust (BIT) says the increased size of the fund is due to widespread demand for bitcoin. Unlike previous attempts to create a bitcoin exchange-traded fund (ETF), BIT focuses on institutional investors because there are fewer regulations in that market.

And there’s another sign of confidence: Financial giants Credit Suisse, KCG Americas, and Wedbush Securities are on board as authorized participants (meaning they will provide liquidity for the fund). Regular Daily readers already know about this trend. We’ve been saying bitcoin’s demand will continue to grow for months now.

Housing Cracks: The Canadian province of Ontario is trying to cool the Toronto housing market. The government is adding a 15% tax on non-Canadian residents who purchase residential properties. Meanwhile, cracks are starting to appear in the mortgage market…

Prem Watsa is the head of Canadian investment firm Fairfax Financial Holdings. He says the real estate market is “going to come down, and a lot of people are going to get hurt.” Of course, we sounded the alarm about Home Capital and the Canadian real estate market just last week.

Dangerous Game: “Mr. Trump is commander-in-chief of the most lethal and most stretched-out imperial army in history. He’s also perhaps the most reckless and impulsive leader ever to be in such a position. Huge warships prowl the seven seas. Drones, missiles, fighter planes, and high-altitude bombers crisscross the air. And underground, hundreds of intercontinental ballistic missiles (ICBMs), like dogs in a kennel, wait to hear their master’s voice. Could something go wrong?” Longtime PBRG friend Bill Bonner says we don’t know what will happen… But Bill says it hardly matters which way it goes: There will be trouble.

From Bob H.: Hi Nick. First of all, I love your writings. On May 9, you wrote an article “This Company Could Cause the Next Housing Crash.” Although it was very interesting, it was also very disturbing to me. Particularly your last paragraph: “Meanwhile, avoid Canadian mortgage lenders, homebuilders, and developers.”

I’m a Canadian who lives in Ontario and own a lot of real estate. Any insight would be greatly appreciated.

Nick’s Reply: Thanks for the kind words, Bob. Flattery is one surefire way to get your questions answered.

Now, we can’t give specific advice. But we can point to history as a guide. When the U.S. housing bubble burst, many U.S. investors lost money in mortgage lenders, homebuilders, and developers.

That being said, not every loan went bad. Most people continued to pay their mortgages and live up their end of the bargain. I assume most Canadians would as well.

Legendary gold speculator Doug Casey is making a prediction so big, he’s allowing you to claim one free year of his No. 1 gold research letter to prove it.

"You could make 100% to 500% gains over the coming months… by buying some of the riskiest and most ‘marginal’ gold companies in the world."

This offer expires tonight. Until then, you can get the details here. 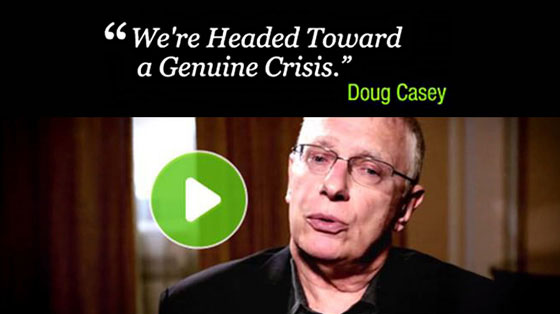