In the late eighties, I was a young employee at a major Wall Street investment bank.

One of my mentors was a grizzled old broker. In truth, he might have been just 38 years old. I was 19 then, so anyone over 35 was ancient to me.

The point is he’d been on Wall Street a long time.

In the late eighties, inflation ran as high as 5.4%. Not as high as today’s record-high levels… but still more than double the Federal Reserve target rate of 2% annual inflation.

To cool down the economy, the Fed hiked rates to engineer a “soft landing.”

A soft landing is when the Fed raises rates just enough to keep the economy from overheating… without causing a recession.

The entire mainstream financial media was trumpeting the Fed coming to the rescue. But this old broker knew better.

He said, “Tiwari, do you know what a soft landing is?”

Then he climbed on top of his desk and jumped to the ground… Bang! Just like that.

“That’s a [expletive] soft landing! Soft landings are a myth.”

And he was right. The next year, we were in a recession. 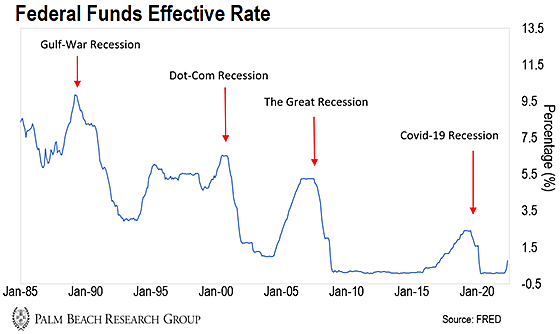 GDP declined by 3.78%, and unemployment rose to 7% over the next four quarters.

This story has always stuck in my mind. It taught me that tightening by the Fed usually makes the economy worse off… not better.

Now, I’m not saying every rate hike leads to a recession. But nearly every recession is preceded by a rate hike. So it’s a leading indicator of an economic downturn.

Right now, many believe the market will avoid a recession and have a soft landing. Even Barron’s wrote an article titled Fed Sees Soft Landing for Economy.

And just yesterday Fed Chair Jerome Powell said the U.S. economy is in “strong shape,” and the Fed can reduce inflation to 2% while keeping a strong labor market…

But that’s not likely. And the market doesn’t want to hear it.

What other conclusion can we draw when the major Wall Street firms still call for 8% earnings growth this year in the S&P 500?

Like my old mentor showed me, there’s no such thing as a “soft landing.” Like jumping off your desk, the landing will be hard. So you need to prepare yourself for it.

The Fed has Few Options

The Fed isn’t stupid. It knows it’s crashing the economy. But what other choice does it have?

In the Fed’s view, it has to get inflation under control. I predict it will fail. And here’s why…

You’re automatically creating an inflationary environment when you pull 30% of the world’s energy supply off the market by blocking Russian energy exports.

The Fed can raise rates all it wants. Unless it’s willing to drag the U.S. into a depression, it can’t stem oil demand enough to put a serious dent in inflation.

The fastest way back to sub-$3 gas is to let Russia flood the global market with its oil and gas exports. But there’s no way the Biden administration will allow that until there’s a resolution to the Russia-Ukraine war.

I can say this: At the very minimum, these headwinds will slow economic growth. In all likelihood, we’re already in a recession right now. And the market hasn’t fully priced this in.

Here’s what I mean by that…

If you look at most analyst numbers, they haven’t cut their estimates for the S&P 500.

According to a recent CNBC article, analysts still expect 8% earnings growth this year and 11% next year. Given the current macroeconomic backdrop, I just can’t see how that makes sense.

So what am I saying?

Despite the rally we saw last week, this market sell-off isn’t over.

The key here is to be patient. We will most likely see much better prices ahead.

Raise cash. Get your shopping lists together and wait. There’s no need to FOMO into stocks right now.

As I’ve said from the beginning of the year, 2022 will be tough. However, the sun will shine again going into 2023.

Treat this year like an “in-game reset” because we’ll have some fabulous prices later in the year. We are just not there yet.

What Can You Do Right Now?

Friends, the Fed is behind the inflation curveball. And history shows the chances of it engineering a “soft landing” are slim to none.

So you must prepare yourself mentally for more weakness. But that doesn’t mean you can’t do anything.

To take advantage of the current volatility, I’ve been selling puts and calls against world-class companies and earning about 5% per month in income.

On big down days, I sell puts on stocks I love and that I’m happy to own. If I get put the stock, I wait for a bear market rally, and then I sell calls.

I did this last month on Meta (formerly Facebook). I sold $170 puts four weeks out and received $800 per contract. That’s a 4.7% return in four weeks.

I got put the stock on Monday… and then turned around and sold the $170 calls four weeks out for $940.

That’s a 5.5% return in 4 weeks. That’s insane. That shouldn’t be happening. But it is because fear is so high. And that’s causing option premiums to explode in value.

This is the same strategy we use in my Alpha Edge service.

If you don’t have the capital to tie up in options right now, that’s OK. Just be patient.

In the meantime, I don’t want you to try to time the bottom of this sell-off by selling all of your stocks and hoping you’ll be lucky enough to time your reentry.

I have been in financial markets for my entire professional life, and even I can’t do that successfully.

That’s why I don’t try to time in and out of the market. I rely on owning a diversified group of well-chosen, quality investments. And I allow time to do the heavy lifting.

Bear markets are a fact of investing. You can’t escape them. The key is to make sure you don’t make them worse by shooting yourself in the foot trying to time in and out of the market or by using leverage.

That’s a recipe for losing money in any market.

So in closing, enjoy the Fourth of July holiday… Spend time with your family… And be patient. Better prices lie ahead.