Nick’s Note: Today, we hand the reins over to longtime PBRG friend and master trader Jeff Clark. Regular readers know that Jeff ran a private money management firm in Silicon Valley for an exclusive group of about 100 wealthy clients.

Jeff’s trading strategy safely made his clients double-digit gains over the years. But that wasn’t enough for two of them—who fired Jeff because he wouldn’t make a risky trade for them. You can probably guess how it all turned out…

In 1999, two of my favorite clients fired me as their financial advisor.

It was a young husband and his wife. I had handled the husband’s father’s money for more than a decade.

The father passed away a few years before, and the couple inherited the estate. It was a large sum of money—large enough that if we earned 10% per year on the assets, this couple could live off the earnings and never have to work again for the rest of their lives.

In 1999, the various conservative mutual funds I recommended they invest in earned 58%. It was far more than we had projected. It was definitely far more than they needed to maintain their standard of living.

But the Munder NetNet Fund that their neighbor invested in—which only bought internet-related stocks—earned three times that amount.

The couple told me they wanted to sell the funds I recommended and put everything into the Munder NetNet Fund.

I reminded them of their long-term goals. I told them that 1999 was an “outlier” year. Just about everything made money. And they’d made far more money in their conservative funds than we’d projected. It wasn’t likely to happen again anytime soon.

And even though I would have profited handsomely on the commission earned by selling their existing funds and buying the Munder NetNet Fund, I told them not to do it. In fact, I refused to do it.

So they fired me. They took their money to another broker who did exactly what they wanted to do.

Had they simply stuck with the plan we set up to make 10% per year over time, they would’ve been just fine. They never would’ve had to work again. They’d never have any financial concerns. And they could’ve raised their family with all of the benefits that financial independence provides.

But that wasn’t good enough. Their neighbor had made more than them—and that wasn’t acceptable. So they threw away the strategy that worked best for them… and rolled the dice on a more aggressive posture.

The Danger of the Fear of Missing Out

Whenever there’s a hot trade in the market or an asset class captures the headlines for producing huge gains, the automatic response for most investors is, “Damn! I have to jump on board.”

All that matters is: “This asset is moving higher. My friends and neighbors are making more money than I am. So I have to get on board.”

Folks, I have to tell you: FOMO will destroy you.

If your neighbors are making money, then good for them. If Biff and Muffy at the holiday cocktail party are bragging about their huge profits in cryptocurrencies, then good for them. That’s wonderful. You should be glad that your friends, neighbors, and in-laws are doing well. Prosperity is a good thing.

But when logic doesn’t support the trade—or when your own financial objectives require a more conservative stance—then chasing the trade is a mistake.

You should focus your investing and trading strategies on what’s right for you. That means you’ll underperform your neighbors in some years.

But who cares? As long as you meet the performance necessary to achieve your long-term goals, then it’s a win.

I’m a trader. My immediate objectives are to make profits on short-term trades. But my recommendations fall within the constraints of a longer-term objective. And in the longer term, it’s the contrarian—or less popular—trades that will generate the largest gains.

So I look for short-term opportunities to make money on longer-term ideas.

Chasing the Hot Idea Is Almost Always a Bad Idea

Traders who rush to get into a trade simply because it’s the hot idea of the moment—or because their neighbors are profiting more than they are—are making a mistake. If the trade doesn’t have a fundamental backing or doesn’t fit with your overall longer-term strategy… then it’s not likely to turn out well.

FOMO will argue otherwise. But I have more faith in the profitability of an anti-FOMO trade.

Traders should be cautious right now.

P.S. A lot of people are worried about a possible crash this year. But I’m looking forward to it. The last time we saw a major crash—in 2008—I had one of the best years of my career. You could’ve doubled your money 10 different times that year with my recommendations.

And in this new, must-see 15-minute talk, I’ll explain everything you need to do this time around.

From Irene K.: Lately, every comment I hear about policies that affect the wealthy is that they’re some sort of “socialist plan.” President Trump’s corporate tax cut was supposed to stimulate capital investment and increase workers’ wages. But it hasn’t done either… It just helped increase the wealth of the highest-paid Americans. And that’s “socialism.”

To me, it’s one more tactic to put more people in the “poor” class and fewer in the “wealthy” class. The tax cuts did not increase demand for goods from these companies. The wealthy don’t want to support the lower class but they don’t want to create jobs that pay a living wage, either. In the long run, buybacks will not benefit the corporations, only the greedy executives. Buybacks don’t grow the business.

From David P.: The law requires corporations to do what is in the best interest of their shareholders. Corporate boards and management have fiduciary duties to owners. What Bernie and Chuck are proposing amounts to a fundamental change in the law relating to business enterprises that would likely have far-reaching effects… as management would be legally required to consider other constituencies (employees, communities) when making business decisions.

In a market-based economy, those decisions are best left to the market, not government mandate. There are reasons European businesses command smaller multiples and have weaker valuations than similarly profitable U.S. businesses… and the requirement that they consider these other constituencies is one of the main reasons. I don’t think we should subject U.S. businesses to these restrictions, it’s a very bad idea.

From David W.: Nick, your essay on Bernie Sanders’ plan to restrict stock buybacks is dishonest. Restricting buybacks has about as much to do with “socialism” as it does with carpentry.

Mass buybacks weren’t even legal until 1982. They’re pure financial engineering intended to artificially jack up stock prices and dividends. They do nothing to make a company more profitable, or to increase sales, or make it more efficient. They’re simply a reward that CEOs and boards of directors give to themselves (and other stockholders). They don’t do anything to improve the health of the company or the economy. And I say this as someone who does try to rake in a lot of dividends. I’m just not kidding myself about what I’m doing or what it means.

Bernie and Chuck need to keep their noses out of businesses. They will eventually ruin the capitalist economy that has helped our country become a world leader.

And one reader has a simple fix to Washington’s gridlock (see Wednesday’s Daily, “How to Profit From a Divided Washington”)…

From Brian H.: My philosophy for dealing with this gridlock is to vote for the non-incumbents in each and every election. I don’t care which party they represent—I vote for the other side. They all need to go. My mother always said if you throw enough spaghetti at the wall… it will eventually stick.

Do you have an opinion about share buybacks? Or a solution to political gridlock in Washington? Join the debate right here…

Mark this date on your calendar: Wednesday, February 27 at 8 p.m. ET.

Plus, Doug will share how he’s used these little-known securities to make millions—and where he’s looking right now. You can reserve your spot for the big event right here… 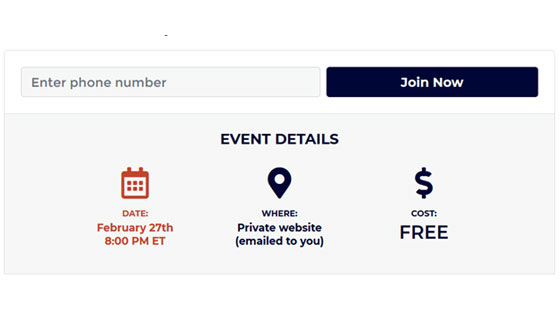