Toward the end of last year, semiconductor stocks tanked…

Now, semiconductors are the microchips that make electronic devices work. (They’re also called the “brains” of machines.) From toasters and smartphones… to computers and complex networking equipment… the modern world couldn’t operate without them.

And because the companies making them are the first part of the supply chain, they’re often the first to feel the pain when the economy slows down.

In fact, as you can see in the chart below, the sector is so important that it’s widely considered a leading indicator of market health: 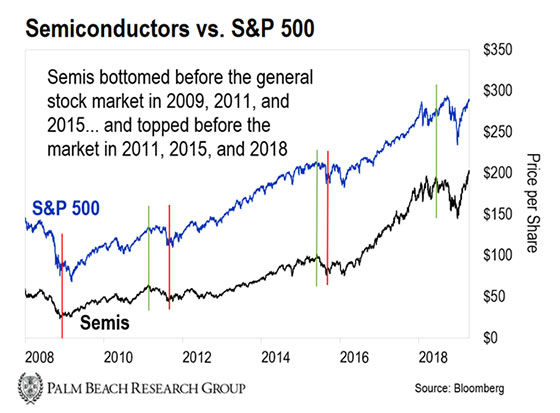 In the second half of 2018, semiconductor companies crashed 24%. And an overall 19% market meltdown soon followed.

But today, we’re seeing a reversal in this important sector. That’s bullish for stocks—and it presents a money-making opportunity for investors…

Seeing the Future… Before Everyone Else

In February 2019, Jason told me his proprietary system (more on it in a moment) was seeing a rush back into semiconductor stocks—and that it was a positive sign of economic growth.

Here’s what he said then:

Perhaps the biggest evidence of a rush back to growth is being seen again in semiconductors. Semis got smoked last year and were essentially a toxic wasteland… And we noticed a major repricing of semis earlier this month with some stellar earnings and heavy institutional accumulation.

As usual, Jason nailed that call…

The sector has shot up nearly 30% in this year’s first quarter—its best start ever. And the overall market has followed.

But if you think you’ve missed the boat on semis, think again. Jason says his system is continuing to signal institutional buying in the sector. And that means more gains ahead for investors in these companies…

Big Money Is Piling In

Regular readers know that we call Jason our Wall Street insider because he spent nearly two decades as a trader (including being a partner at Cantor Fitzgerald).

But few people know this: In 2012, his firm helped create Tradeworx.

The name might not ring a bell. But if you read about high-speed trading in The Wall Street Journal or The New York Times—or watched the 60 Minutes special on it—you actually do know about Tradeworx.

It was the fastest high-speed trading system on Wall Street—making trade in less than a second. But here’s the thing…

After Jason left Cantor Fitzgerald, he created his own breakthrough system—one that can spot the biggest (and most lucrative) trades on Wall Street… up to a month in advance.

That same system flagged institutional buying in semiconductors earlier this year. And it’s proven to be highly accurate on a number of other occasions, too. (For example, it predicted the sell-off in February 2018 and the rally we saw at the start of this year.)

Now, Jason says his system can flag this type of trading activity because it quickly catches what institutional buyers are doing. That type of speed is important.

Here’s what he told me:

Most ordinary investors miss these opportunities because they don’t know what professional investors like hedge funds and institutions are doing. But to be fair, these big-money firms work hard to keep their activity quiet—because until they’re done, it doesn’t help them if people know what they’re buying. That’s why speed is key.

In his most recent Palm Beach Trader issue, Jason identified a small tech company that institutions are snapping up quickly. And his system is showing there’s likely more demand from hedge funds—which could lead to triple-digit gains in just a few months. (Subscribers can read the issue right here.)

If you’re not a Palm Beach Trader subscriber, the best one-click way to get exposure to the sector is through the iShares PHLX Semiconductor ETF (SOXX). This fund holds large semiconductor companies like Nvidia, Intel, and Broadcom.

P.S. As I mentioned above, Cantor Fitzgerald stunned everyone with its new high-speed trading system in 2012. Time magazine… The New York Times… The Telegraph… and even 60 Minutes reported on this system—which could “look up to 30 milliseconds into the future.”

It was hands down the fastest high-speed trading system in Wall Street history. But now, after seven years, Jason is ready to make history again.

On April 24, Jason is unveiling his own breakthrough system, which he says can spot the market’s fastest-growing stocks up to 30 days in advance—and you’re invited.

As an attendee, you’ll have the chance to claim his No. 1 recommendation. And the profit potential could be enormous—as much as $9,385 in one trading day. Plus, Jason’s giving away a special three-part masterclass for free when you register now.

Do you plan on attending Jason’s VIP event? If you have questions you’d like to ask him ahead of time, send them to us right here…

It might be hard to believe. But you can find out how these new income investments work by going right here… 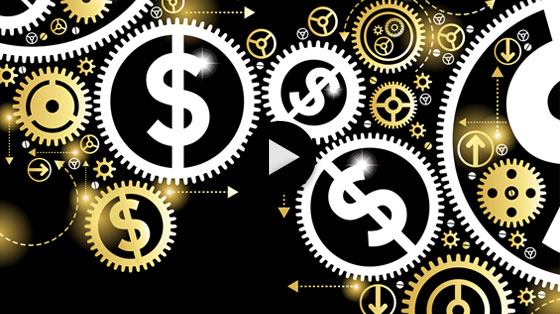