When I ask people why they didn’t buy bitcoin during the 2017 bull run, the answer is overwhelmingly this: They couldn’t buy it in their brokerage accounts.

And E-Trade joins Fidelity—which has nearly $7 trillion under management and 30 million individual customers—in this movement.

Last week, Fidelity said it plans to roll out crypto trading to its institutional clients. Eventually, it’ll make crypto available to its millions of retail customers, too.

Not to be outdone, TD Ameritrade is also testing bitcoin trading. It has more than $1 trillion under management and nearly 11 million client accounts.

So crypto will soon be available to millions of institutional and retail investors.

And you don’t have to be a financial wizard to see the writing on the wall: Crypto is going mainstream. But if you’ve been following our work, this shouldn’t come as a surprise…

In January, world-renowned cryptocurrency expert Teeka Tiwari told us that 2019 would be the year of Wall Street crypto greed. And so far, that’s been the case.

Since its January lows, bitcoin is up over 115%. It’s helped make cryptos the best-performing asset class in the world year-to-date. Yes, that’s even better than stocks—which are only up 13% in the same time.

But here’s the thing: This run isn’t over.

Today, I’ll tell you why our experts think the next bitcoin rally is underway—and why you should get in now, before the bull market takes off…

The main reason behind this rally? As Teeka said: Wall Street greed…

2019 will be the year of institutional greed. Let me explain why I think so…

During the depths of the crypto bear market in 2018, about a dozen financial firms started laying down the foundation to get into cryptos. None of them have backed down yet.

That’ll eventually lead to investors being able to buy bitcoin from their brokerage accounts with the click of a button. That’ll be a first.

And it’ll also make it easier for ordinary people to buy bitcoin. For instance, we won’t have to deal with lengthy crypto wallet addresses that make no sense. We won’t have to worry about maintaining or losing our private keys. Once we get regulated exchanges, that’ll all happen behind the scenes.

They’ll also help expand the pool of available buyers this year by about 15 times. Compared to about 35 million crypto holders, there are nearly 500 million stock buyers in the world who have never owned crypto. That will send prices higher.

But if you think you’ve missed the latest rally, think again. When bitcoin goes from bearish to bullish, the sky’s the limit.

Take the 2017 bull run, for example. As you can see in the chart below, bitcoin rocketed nearly 2,000% from January to December that year… 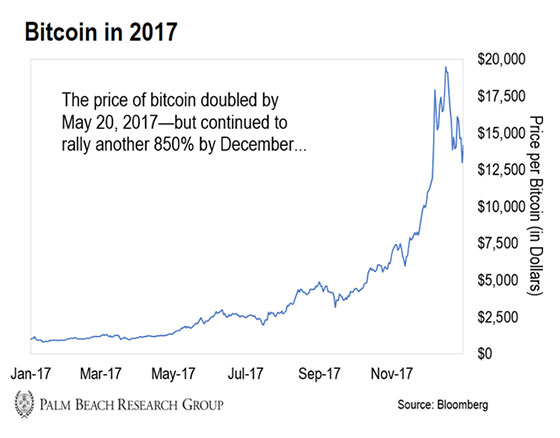 The Next Rally Could Be Even Bigger

And keep this in mind: This growing awareness came during the brutal Crypto Winter.

Of course, awareness doesn’t necessarily mean people will buy bitcoin. But 27% of the people surveyed said they’re “very” or “somewhat” likely to purchase bitcoin in the next five years.

That’s up from just 19% in 2017—and triple the 9% of people who already own bitcoin. Plus, it doesn’t even count all the institutions trying to get into the space.

Now, Teeka and Greg believe institutional investors will put extreme buying pressure on bitcoin. And with millions more retail customers also coming into the space, we’ll see a rally for the ages.

In fact, if you’d bought bitcoin when Teeka said to double-down last month, you’d now be up nearly 78%.

Bitcoin generally lifts the entire crypto market, too. So although there’s a lag, you can expect further gains in alt-coins as well.

Remember, you don’t need to bet the farm on cryptos. They’re speculative and volatile, so be responsible. You just need a tiny stake for the potential of life-changing gains.

P.S. Did you double-down on bitcoin last month? If so, let us know how you’re doing so far right here.

This might sound crazy… But one master trader believes he’s discovered the exact date the stock market will crash this year. And he thinks it’ll be the worst we’ve ever seen…

But he has a plan for exactly what you need to do—right now—to prepare for it.

And on May 22 at 8 p.m. ET, he’s holding an exclusive presentation to reveal this date… along with the one strategy you need to start using immediately to make it through the crash intact.

If you stick with it, you’ll book a profit—while most investors lose everything. And to reserve your spot to his special event, just go right here. 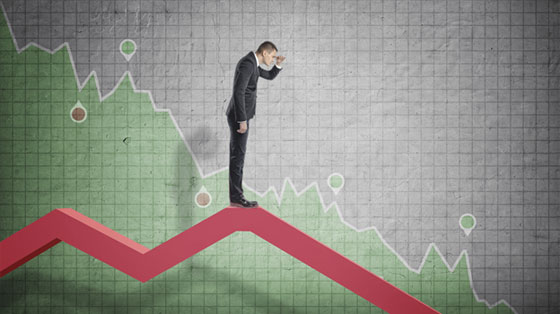