The products will include storage (custody) for large clients such as hedge funds and family offices. This service will help large institutional investors ease into the crypto space—and bring trillions of dollars along with them.

Fidelity—one of the world’s largest financial firms with $7.2 trillion in assets under management—won’t make its new crypto products available to retail investors like you and me right away… But they’re coming soon.

Don’t believe me? Try getting an allocation in the next hot initial public offering (IPO). If you’re not in the “know,” chances are you’ll be left out.

But I’m not writing today to tell you about the tidal wave of institutional money headed into the crypto space.

If you follow world-renowned cryptocurrency expert and PBRG guru Teeka Tiwari, you know that 2019 will be the year of “Wall Street Greed.”

For those who’ve already positioned themselves, Fidelity’s announcement is great news.

If you’re still on the fence about buying bitcoin, though—or considering using the pullback to add to your position—you’ll want to avoid buying this bitcoin-related product.

Usually after an asset falls over 80%, people leave it for dead and move on to the next hot thing.

But that hasn’t been the case with bitcoin. Interest is still high, despite its drop from nearly $20,000 at its peak to around $3,450 today.

According to a December 2018 University of Cambridge study, the number of crypto users doubled last year. That’s impressive, considering the price decline during the year.

And investors still want their piece of the pie…

Last month, Greg attended the North American Bitcoin Conference in Miami. During one presentation, he saw this slide: 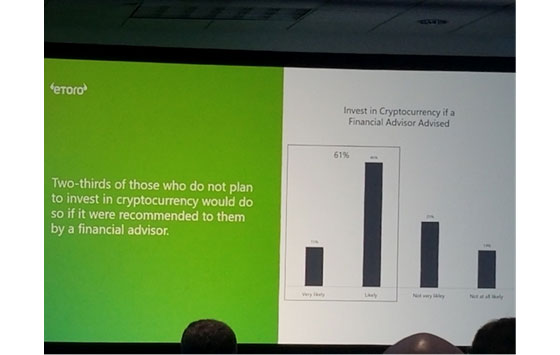 As you can see, it says: “Two-thirds of those who do not plan to invest in cryptocurrency would do so if it were recommended to them by a financial advisor.”

I’ve been in the financial field for years now. And I can tell you that people place a lot of trust in their financial advisors.

What this slide shows is that when financial advisors begin recommending crypto to their clients, there will be an onrush of investors into the space.

Right now, only 35 million people own cryptos. And firms like Fidelity, Goldman Sachs, and the Intercontinental Exchange (owner of the New York Stock Exchange) will open up crypto to millions more investors worldwide.

Many financial advisors have been slow to the crypto game. That’s largely due to the difficulty of buying cryptos. (If you’ve bought cryptos before, you know all about digital wallets, private keys, public keys, two-factor authentication, and so on.)

But Fidelity, the impending Bakkt exchange, and other services will fix these problems with their custody solutions. It will just take some time for them to become fully operational.

In the meantime, some overly anxious investors are demanding their financial advisors give them easy exposure to bitcoin.

These are guys and gals who want to profit from the turnaround coming in crypto—but don’t want to go through the process of setting up their own crypto wallets and accounts.

If you’re one of these people, I have a warning for you…

One of my colleagues at PBRG headquarters has a lot of contacts in the financial advisor community. And they’re telling him that their clients are demanding crypto exposure.

One advisor said that his client told him, “If you don’t buy bitcoin for my account, I’m leaving.”

To keep the client, the advisor bought the Grayscale Bitcoin Trust (GBTC). The fund tracks the price of bitcoin. But the exposure comes at a cost…

GBTC trades at a 20% premium to the bitcoin it holds. Put another way, investors are paying $1.20 for only $1 worth of bitcoin.

Now, it likely trades at a premium because it’s currently the only way for investors to gain exposure to bitcoin in their brokerage accounts.

And this premium has historically risen when bitcoin gains popularity. When bitcoin reached $19,000 in December 2017, GBTC was trading at over a 100% premium—meaning, people were paying the equivalent of $38,000 per bitcoin to add it to their accounts.

But GBTC’s competitive advantage will eventually erode. As firms like Fidelity launch new products, there will be cheaper alternatives to add bitcoin to your brokerage account.

Once that happens, GBTC’s premium will evaporate—and investors could lose that 20%.

So if you own GBTC, consider selling it and using that capital to buy bitcoin directly from a crypto exchange. Yes, it’s more work… but it’s worth it.

And always remember: Bitcoin is volatile. You don’t need to buy much for the potential for life-changing gains. So don’t bet the farm, and keep your position sizes small.

P.S. Have you bought or considered buying GBTC? Tell us your story right here…

From Sam O.: Nick, you’re a great writer! You’re fortunate to have been mentored by Bill Bonner. I’m jealous…

But you really don’t want to hang out with Ms. AOC. These people are obviously deceived. You can do much better. Seriously!

Modern monetary theory (MMT) is crazy. I just turned 60. I have six kids, four of whom are in college. You’d think I would love free college tuition for them. But I don’t. Free this, free that—free everything scares me.

From Robin D.: Regarding MMT, it sounds like the policies used by Zimbabwe and Venezuela. I might throw in the old Weimar Republic, too. And who are these “economists” who support it?

From Debbie R.: Hi, Nick. You asked if MMT would cause the U.S. to go the way of Venezuela, Zimbabwe, or the Soviet Union…

Sure, it could… We spent the Soviets into oblivion during the Cold War, and we certainly could spend ourselves into oblivion as well. The question is: How might that occur?

You can’t compare third-world countries to the U.S. Russia, on the other hand, has huge populations of non-Westerners who may have served as a boat anchor, dragging down its economy. I believe the biggest threat to the U.S. is not necessarily just socialism, but unfettered immigration that threatens to turn us into some kind of hybrid, third-world country like Brazil. If we go down that path, the U.S. will be less productive and unable to pay for all these lofty programs.

From Michael K.: Socialism will be the death of the U.S. It always fails, and will bring chaos to the country. Millennials need to read history.

From Steve F.: MMT is a disaster. I actually own gold and have done so for a while. But what makes you think that people in power who are cheerleading for MMT won’t confiscate gold when their utopian socialist dreams come crashing down like they’ve always done? FDR, anyone?

From Amy G.: Nick, I appreciate your “alarm” about MMT. But what’s really different from what AOC is proposing and what our politicians have been doing for decades? Printing money to control the economy and its people isn’t new… Now, it’s just coming from an “outsider” and a younger generation. I agree with the gold recommendation, though.

From Joanne C.: The thought of these lunatic socialist Democrats taking control of this country scares me to death. Ocasio-Cortez is as crazy as they come! She answers questions by spouting big words and trying to sound intelligent. She’s not.

Ocasio-Cortez thinks she’s pulling a fast one by telling people how her policies would help minorities, how the government should pay for college, and how MMT should replace the free-market system. But this is all just to create a citizenry that’s dependent on government.

These socialists may fool many millennials, but there’s a group larger than that who are well-informed and understand just how destructive their policies are to this country.

With MMT becoming mainstream, do you think it will be the path to prosperity for the U.S. economy? Or will it lead us in the way of Venezuela and Zimbabwe? Continue the debate here…

There’s a way to double, triple, or even 10X your money when gold prices rise… You just have to know which mining company is the right one to invest in.

And using a patented satellite technology, this expert geologist can do just that—by pinpointing which companies are sitting on literal gold mines before a shovel ever goes into the ground.

Think this “Digital Treasure Map” is too good to be true? See all the evidence for yourself right here. 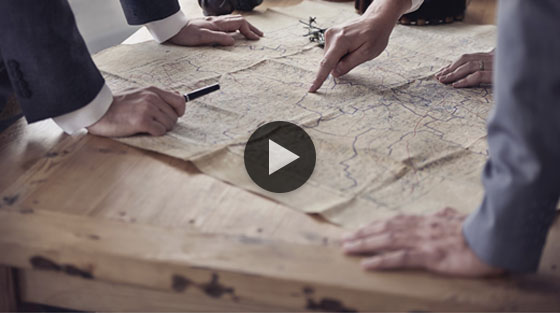